Gophers start conference play with two wins in a row 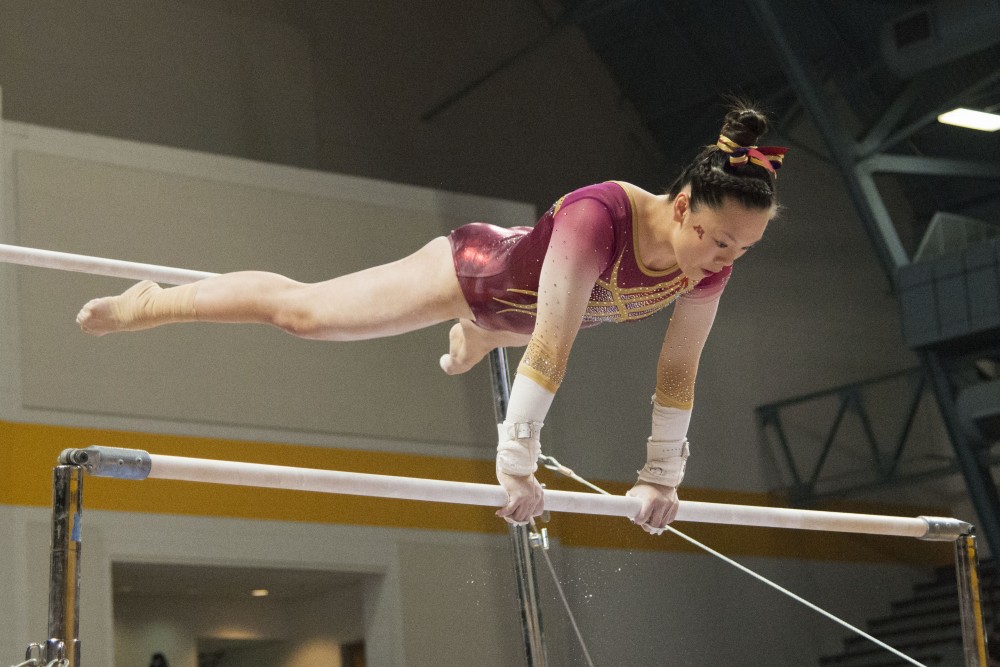 After a disappointing fourth-place finish in regionals last season, the Gophers (7-2, 2-0) have shown that they can be much better this season.

The team began Big Ten competition last week on Saturday, Jan. 26 on the road against Penn State and narrowly edged the Nittany Lions 196.925-196.775.

The Gophers recorded season-highs in three events: the vault, bars and beam. The team’s beam score of 49.375 put them among the top women’s teams in Gophers history in the event, placing fourth in program history.

Sophomore Lexy Ramler continued her dominant streak, putting on the best all-around showing of her career with a score of 39.625, which was first among all-around competitors. The performance also earned Ramler the fifth-highest individual all-around score in program history.

The Gophers had three gymnasts barely miss a perfect 10 score during the meet with scores of 9.950. Ramler scored 9.950 on beam for the second week in a row, Ivy Lu was just 0.050 points away on her bars routine and Paige Williams continued to show off her skills on the floor exercise as she narrowly missed a 10.

Although the score was close, the Gophers had the top performer in each of the four events and the top two performers in two events: the floor exercise and the bars.

The Gophers traveled back home for their third of five consecutive Big Ten duals to beat Michigan State 196.725-194.450.

The team continued its all-around performance with the team scoring above 49.000 on all four events, including a rebound showing on floor, which was their weakest event against Penn State.

“We keep getting stronger each and every week. I think floor was a big event for us today,” head coach Jenny Hansen told Gopher Sports. “We’ve been taking a bit longer to get ready on floor than we have in the other events, but floor came through. It was a great meet on every event today.”

Ramler and Loper finished as the top-two all around competitors. Ramler finished first on balance beam and bars and tied for first with Loper on vault. Loper added a third place finish on the floor exercise.

“Ona had her highest all-around score that she’s ever had, so that was fantastic. Lexy was great as always,” Hansen told Gopher Sports. “Seeing some newcomers, Abbie Nylin in particular, coming in and nailing two events for us was pretty awesome.”

The Gophers will look to continue their undefeated start to conference play as they head to Nebraska Saturday to take on the Cornhuskers.