Regents discussed the President's budget proposal, which includes a tuition increase of 2 percent for Twin Cities undergraduates, at its May meeting. 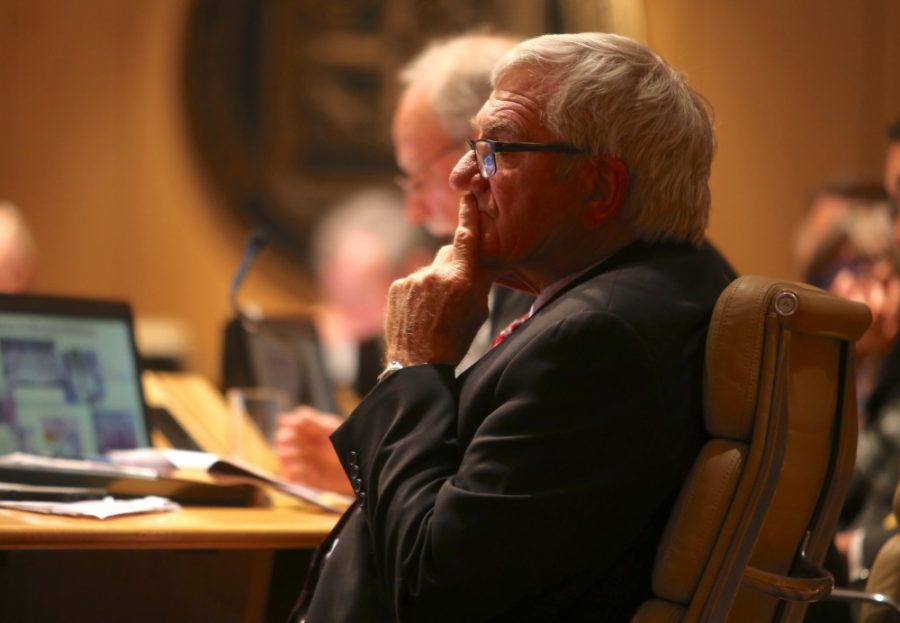 Newly elected to the University of Minnesota Board of Regents, Randy Simonson attends his first meeting on Friday, May 11 at McNamara Alumni Center.

The University of Minnesota’s Board of Regents discussed new mental health training programs, the fiscal year 2019 budget proposal and a system-wide strategic plan, among other things at its May meetings on Thursday and Friday.

The meeting was also the first for Regent Randy Simonson, who was appointed to the Board on Thursday.

University President Eric Kaler’s proposed operating budget for fiscal year 2019 was reviewed by Regents at the meeting. The proposed budget is part of Kaler’s goal to reduce administrative costs by $90 million.

The budget also proposed a 4.7 percent increase to room and board fees on the Twin Cities campus to help cover costs of Pioneer Hall renovations.

In the meeting, Regent Steve Sviggum asked if the funds gained from tuition increases could be obtained elsewhere, such as from hiring less faculty.

Regent Richard Beeson said an increase in faculty is necessary to keep the University competitive with other colleges and to improve the prestige of the medical school, which has recently taken on more faculty and a new dean.

A resolution to keep tuition flat for resident students for fiscal year 2019 was brought forth by Regent Michael Hsu, but did not obtain enough votes to pass.

The board will vote on Kaler’s proposed budget at its June meeting.

The Board discussed the implementation of new student mental health training programs on all campuses. This resulted from system-wide reports on student health and wellness in 2015 and 2016 that found mental health issues negatively impact many students’ daily activities and academic success.

“Mental health is the number one public health issue on the University of Minnesota campuses,” Sandra Olson-Loy, vice chancellor for student affairs for the Morris campus, said at the meeting.

The University will also hire four new therapists during the upcoming academic year to help prevent waitlists for counseling services, Christenson said at the meeting.

The Regents reviewed potential areas of focus in the system-wide strategic plan, which aims to offer guidance for Minnesota State Legislature funding requests and University budgets. At the meeting, the Regents examined the medical school as a potential area to highlight.

Jakub Tolar, dean of the University’s Medical School, advocated for the improvement of the school. He emphasized making the school a healthcare destination, working to enhance its prestige and coordinating health priorities with the state’s interests.

The Regents agreed on the importance of improving the medical school but said a concrete strategic plan is needed to proceed.

Regent Dean Johnson said that he would like the board to take an active role in supporting the medical school’s goals.

“We can’t just be cheerleaders in the stands,” Johnson said.

Correction: A previous version of this article misstated when Learn to Live was implemented. The tool was introduced last fall.