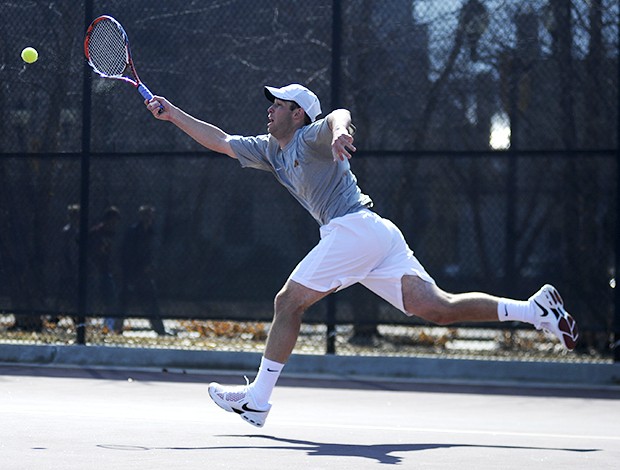 A signature win by sophomore Tobias Wernet wasnâÄôt enough to keep the Minnesota menâÄôs tennis team from dropping its first match at home this weekend. After rolling to a 6-1 win Friday evening against 43rd-ranked Indiana, the Gophers were edged for the first time at the Baseline Tennis Center this season in SundayâÄôs 4-3 loss to No. 12 Illinois. Wernet âÄî 16-4 in singles action this year âÄî paced Minnesota with a 6-3, 7-5 win over Dennis Nevolo with a career win in the No. 2 singles. Midway through the match with No. 33 Minnesota still in the hunt, Wernet upset Nevolo, ranked the 39th best player in the country. âÄúThe big wins were missing,âÄù Wernet said after his win against Nevolo. Wernet was one of three Gophers to post wins in singles action Sunday. Junior Dino Bilankov edged Ruan Roelofse 6-4, 6-3 in the No. 5 singles and freshman Julian Dehn outlasted Marek Czerwinski 5-7, 6-4, 7-5 in the No. 6 match. Minnesota freshman Ishay Hadash dropped the No. 1 singles match 6-4, 6-1 to Marc Spicijaric, IllinoisâÄô Roy Kalmanovich posted a pair of 6-4 wins against sophomore Sebastian Gallego in the No. 3 singles and Phillip Arndt dropped a 6-4, 1-6, 6-4 back-and-forth battle with Waylon Chin in the No. 4 matchup. The Illini also picked up a point in doubles action after taking two out of three matches. âÄúIn a match this close, it comes down to a point here and a point there. We just need to make sure that weâÄôre doing everything in our control to make ourselves as good as possible,âÄù Minnesota coach Geoff Young said. âÄúThe effort was there, we just have to be a little bit better.âÄù The Gophers return to action next weekend with road matches against No. 58 Northwestern on Saturday and No. 24 Wisconsin on Sunday. Women drop matches The Minnesota womenâÄôs tennis team dropped a pair of Big Ten road meets against ranked foes this weekend âÄî extending the teamâÄôs losing streak to three. The 65th-ranked Gophers were swept 7-0 by No. 40 Illinois in Urbana on Saturday before battling to the losing end of a 4-3 match against No. 41 Indiana on Sunday afternoon. âÄúWe were right there against IndianaâÄù Gophers coach Tyler Thomson said. Junior Tijana Koprivica handled Charlotte Martin in a 6-0, 6-1 battle at the No. 2 singles and Niltooli Wilkins beat Alba Berdala 6-2, 1-6, 6-2 in the No. 3 matchup. Minnesota picked up its third point in doubles action where Koprivica paired with junior Jackie Sperling and Wilkins teamed with freshman Magdalena Wiecha to win two out of three matches. At 2-4 in the Big Ten, Minnesota will have a chance, however slim, to bring its conference record back to even next weekend when No. 1 Northwestern and No. 70 Wisconsin come to town. With only two Big Ten meets remaining after next weekend, the Gophers have little time to improve their place in the conference standings âÄî something Thomson said is vital to the teamâÄôs postseason success. âÄúThe better seed we have, the better the chances to go further in the tournament.âÄù