The Twin Cities Horror Festival will play 13 shows at the Southern Theater from Oct. 24 to Nov. 3. 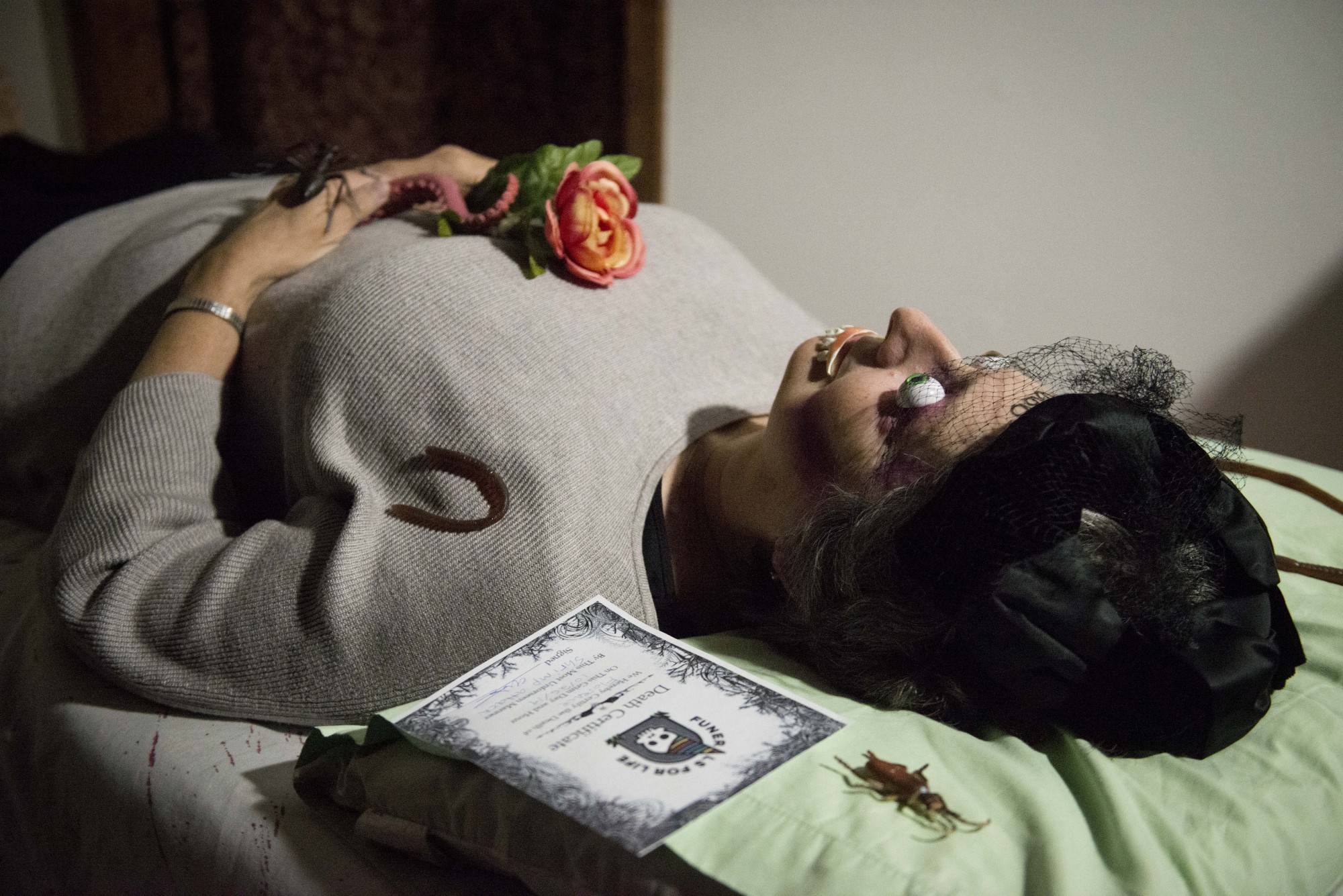 Florence Brammer lays for a living embalming session in the Southern Theater on Saturday, Oct. 26. Living embalming sessions, brought to the theater for the Twin Cities Horror Festival and put on by "Funerals For Life," are short and interactive dark comedy shows in which the audience pretends to be dead.

If you’ve ever wondered what it would feel like to get embalmed, the Twin Cities Horror Festival can help you out.

You can experience a15-minute embalming session — what they call an “ASMR sensory spa morgue makeover.”

The Twin Cities Horror Festival has grown from its beginnings as an experimental juried show to a non-profit organization that explores how horror can be staged instead of filmed.

Each year, the festival brings several productions to life. They commission artists to push creative limits in a genre that’s typically on-screen rather than live. This year the festival has13 shows playing at the Southern Theater on West Bank for two weekends.

“Theatre has some elements that film doesn’t, where you can use all of your senses,” said Debra Berger, the horror festival’s marketing director. “You can walk into a space and smell something really repulsive or have the feeling that someone’s behind you. It can be even more immersive than film, which is really exciting.” The first Twin Cities Horror Festival was held in 2012 by a group of people at Four Humors Theater. They had the idea to produce a horror show for the season, so they reached out to some producers and eventually decided to turn it into a two-weekend-long festival.

“Audiences really love it and they keep coming,” Berger said. “We keep filling the house and it’s like an ‘If you build it, they will come,’ kind of thing.”

One of the shows featured in this year’s horror festival has been two years in the making. “Bug Girl,” a horror shadow puppet show created by artist and puppeteer Liz Howls, follows a young girl after she swallows a bug and has the sudden urge to eat brains.

“Bug Girl” happens from behind three screens, so all that’s seen are silhouettes of the characters, which are puppets made of materials like paper.

“If I make the plot a little darker, I try to counteract the aesthetic that my hand brings out, which is a little bit more sweeter looking,” Howls said. “So my main character will be this young girl and it’ll be very sweet, but what can I do that could make it much darker?”

“Bug Girl” started as a small five-minute production that Howls performed with a friend on a dock on the Hudson River.

“I think shadow lends itself well to horror,” Howls said. “So, after investigating the idea more, I wanted to commit to a larger version of [‘Bug Girl’].”

Howls applied for the show to be in the 2018 Twin Cities Horror Festival, and according to Berger, she was one of the top applications they had. But Howls realized she didn’t quite have the budget she wanted for the production.

She secured a grant from the Jim Henson Foundation and gave herself two years to create the visual story she was hoping it would become.

“I started looking at comic book artists and how stories were told through visual storytelling in a comic-book style,” Howls said.

She created her puppets with rougher and cruder lines instead of working on them delicately. She uses several screens to imitate the comic book effect, while different colored lights give the scenes a little more definition.

“It takes so much to make one puppet show,” Howls said. “And that’s a lesson that I learn every time I make a puppet show. But I would like to keep pushing this storyline further.”

Howls wants to go on tour with “Bug Girl” eventually, creating multiple episodes that would make it feel like a comic book. And despite the gore, it has a message that almost all audiences can relate to, which is completing the natural cycle that we all seem to be on. The festival will be closing its doors on Nov. 3 with the show “Geminae,” but it’ll be back next year, with even more spookiness and gore.

“Honestly, between [the producers’] elation and the excitement of audiences after seeing a show, I can’t decide which one I love more,” said Ryan Lear, the festival’s executive director. “Creating [a] community, paying artists and continuing to build a strong platform for producing new, original, theatrical works [is] really what makes this festival so worth doing year after year.”