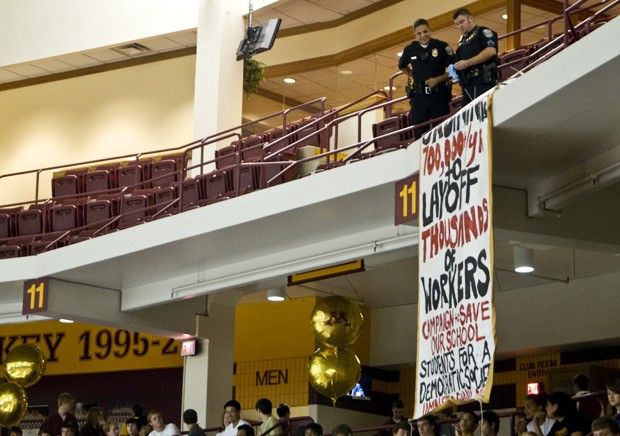 UMPD officers take down a banner that demonstrators released during Convocation at Mariucci Arena on Thursday.

Four members of the University of Minnesota student group Students for a Democratic Society (SDS) attempted to interrupt Thursday morningâÄôs first-year Convocation at Mariucci Arena by demonstrating during President Bob BruininksâÄô welcome speech. The group blew air horns, threw down hundreds of fliers and unfurled two University of Minnesota banners that had been painted over with political messages. The banners were dropped from the upper deck box seats, which werenâÄôt accessible to the public during the ceremony. The demonstrators entered Mariucci a few days earlier in order to prop open doors and make sure they could bypass security, Grace Kelley , who organized the demonstration, said. Each student had to present a ticket in order to get into the arena. âÄúWe had to infiltrate the building,âÄù Kelley said. Bruininks never stopped his speech, but did acknowledge the demonstration. âÄúThe University does believe in First Amendment rights and free speech,âÄù he said, âÄúbut in an appropriate and respectful manner.âÄù His comments were met with applause from some students, and the banners were removed by police within five minutes. âÄúIt was intense,âÄù said first-year Ryan Noshay, who was at Convocation. âÄúNobody was really listening to [Bruininks] for like five minutes. Even the Regents were looking up.âÄù The demonstrators will not be facing academic discipline, Bruininks said after Convocation. âÄúFree speech and differences in opinion is what makes this University great,âÄù he said. âÄúI still feel that this Convocation is the best weâÄôve had in my eight years here.âÄù SDS is using this demonstration to kick off their âÄúCampaign to Save Our School,âÄù a public campaign designed to unite students against the current administrationâÄôs financial policies, SDS member Tracy Molm said. âÄúBruininks took a wage freeze, but at $750,000 thatâÄôs not saying a lot,âÄù Molm said. âÄúThere are clerical workers that are paid $38,000. You canâÄôt support a family on $38,000.âÄù One sign read: âÄúWe pay Bruininks $700,000 per year to lay off thousands of workers.âÄù Despite the demonstration, Convocation was a great success, Beth Lingren Clark, director of Orientation and First- Year Programs said. âÄúItâÄôs a great kickoff to the Welcome Week experience,âÄù Lingren Clark said. âÄúThe disruption wasnâÄôt even worth mentioning, really.âÄù