No. 7 Minnesota comes into the game with momentum, but the top team remains unscathed. 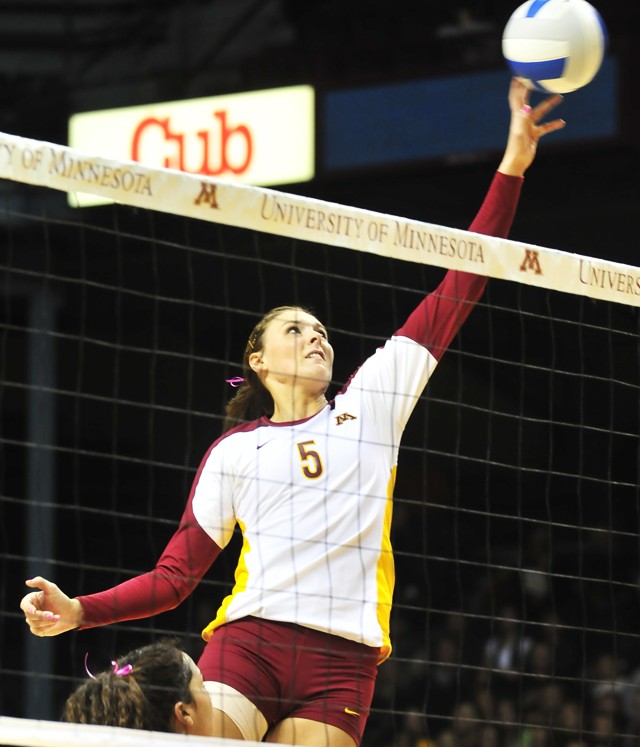 ItâÄôs always a bonus when your team goes up against top competition on a momentum upswing. Having that opportunity twice in one season is especially rare. Yet that is exactly the scenario the No. 7 Gophers volleyball team faces as they move into Friday nightâÄôs match at No. 1 Penn State at 6 p.m. Minnesota was on a seven-match winning streak the last time with an Oct. 11 match at home against the Nittany Lions. The winning streak included a 5-0 start in the Big Ten. The positive momentum did little to help the Gophers. Even though they played Penn State very evenly âÄî especially in the first two sets âÄî Minnesota eventually dropped the match in straight sets. Despite being less than three weeks removed from that defeat, it will be a significantly different Gophers team taking the court this time around, but the squad is once again on a high. The now Brook Dieter-less Gophers proved they have the full capability of beating tough opponents with two big home wins last weekend. Minnesota first beat Michigan State in five sets and then took down No. 11 Michigan 3-1. âÄúAbsolutely those wins help,âÄù Gophers head coach Mike Hebert said. âÄúI think our team had a little bit of a chip off their shoulder last weekend. That really helped them play in a very determined fashion. I think confidence is a result of playing with great determination, and that has helped us be successful.âÄù The wins also showed that Minnesota has plenty of offensive options even without Dieter. The GophersâÄô offensive prowess now begins with Tabitha Love . The 6-foot-6-inch freshman out of Dauphin, Manitoba proved just how much of an offensive weapon she can be with a 37-kill performance between the Michigan State and Michigan matches. That effort also earned Love the title of both Big Ten Co-Player of the Week and Big Ten Freshman of the Week. LoveâÄôs average of 2.33 kills per set is second on the Gophers to junior Lauren Gibbemeyer , who has been a stable force at middle blocker for the Gophers all season, averaging 3.09 kills per set. Also coming on strong for Minnesota has been sophomore Ariana Filho , who has averaged 2.74 kills per set in her last five matches. Minnesota is going to need all the offense it can muster as they travel to No. 1 Penn State. The word âÄúdominateâÄù hardly seems sufficient when describing the Nittany Lions, who are on an 86-game winning streak dating back to Sept. 15, 2007. Penn State leads the Big Ten in nearly every statistical category, including hitting percentage, assists, kills and blocks. The bright side for the Gophers is that with so many wins and exceedingly high expectations for Penn State, the pressure remains on the Nittany Lions. âÄúPenn State is the ones with the target on their back,âÄù senior Christine Tan said . âÄúWeâÄôre free to play as we choose, and learning from last match, we know we can definitely hang with them. We just need to take care of our side of the court.âÄù The Gophers get no reprieve before heading to their next opponent, Ohio State, on Saturday at 6 p.m. Minnesota beat Ohio State 3-1 on Oct. 9, but it was hardly an easy win for the Gophers, as the match featured a total of 35 tie scores and 19 lead changes. The Buckeyes come into SaturdayâÄôs matchup on a hot streak of their own, having won three of their last four matches, including 3-1 wins over Michigan State, Purdue and Indiana. âÄúI think [the Buckeyes] are going to be a tremendous test of our ability to play on the road,âÄù Hebert said. âÄúThey have a great coach, and they play in such a determined fashion. Mentally theyâÄôre very strong, and weâÄôre going to have to be at our best in that match.âÄù