The national festival welcomes participants to strive for diversity during the 2020-21 theater season. 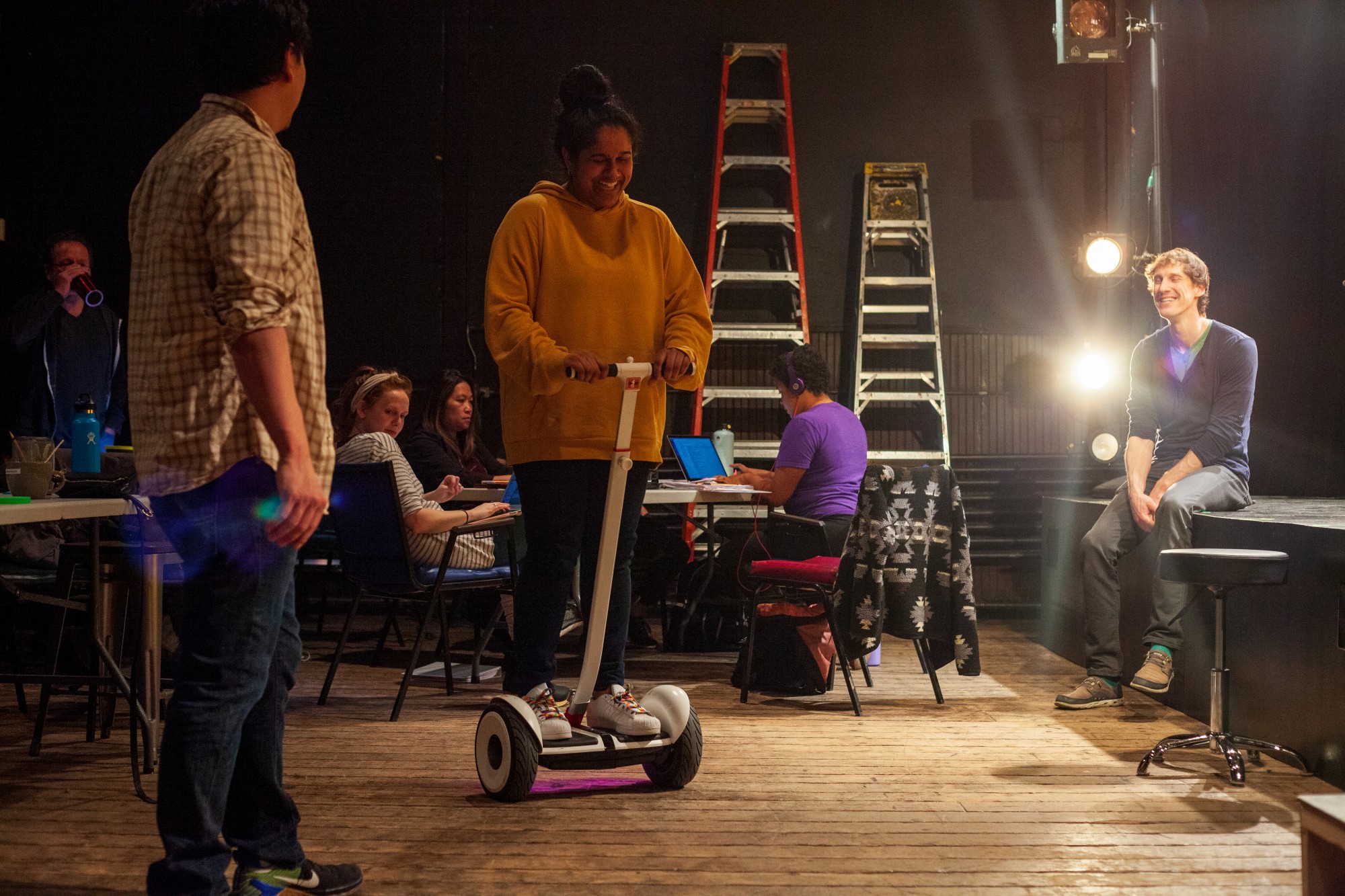 Actress Sushma Saha tries out a new means of transportation during a break at a rehearsal for "Interstate" at MixedBlood Theatre on Tuesday, Feb. 18. The production, created by Kit Yan and Melissa Li, follows the experiences of two trans people, navigating a myriad of cultural issues.

Theater’s ever-evolving persona is taking a turn this year as one group looks to change the conversation about diversity in produced works.

The Jubilee is a year-long theater festival which invites participants to produce works written by or about traditionally excluded voices. As of January, 126 theaters around the country have pledged to the first-ever Jubilee year, with 13 in Minnesota. Organizers are hopeful for more participants to join.

Rachel Grossman, a producer on Committee of the Jubilee, said the festival marks the beginning of a conversation on diversity and inclusion in theater works that are produced.

“This group of people said, wouldn’t it be amazing if for one year, the entire theater community across America produces a season of only plays by artists who are not straight white men?” said Lisa Channer, a producer of the Jubilee and associate professor of theatre arts and dance at the University of Minnesota.

“What voices would be discovered, what connections would be made? What new audiences would be brought in? What might happen?”

About the Jubilee year

These are the questions that the Jubilee was built on.

A 2017 research study highlighted the bleak outlook for minority identities in their chances of being produced in the United States. “The Count” found only 15.1% of produced theater works were created by people of color. Works by women accounted for about 29% of works produced, and other non-binary identities accounted for not even half a percent of the productions.

“When I first got out of graduate school, I remember hearing those statistics and thinking, ‘What am I gonna do?’” Channer said. “Because it really isn’t about ability… it’s just old habits.”

In 2015, a group of 20–30 people began planning a way to make a difference in the theater community. They decided on 2020 as the Jubilee year, to allow theaters time to plan and adapt.

Of the 13 Minnesota theaters, the largest among them include the University of Minnesota’s Twin Cities and Duluth campuses, Mixed Blood Theatre, The Umbrella Collective and Ten Thousand Things Theater Company.

The Jubilee isn’t one size fits all. Theaters are allowed to pledge their support to the Jubilee year as they wish and are encouraged to write their own pledge. Organizers see any little steps toward diversity as improvement, and no one is coming to enforce that they uphold their pledge.

“You can go full Jubilee and say, ‘We’re going to do a whole year of only the work by, about [minority groups].’ And we’re just going to try that,” Channer said.

“And other theaters might say, ‘Okay, look, we’re a Shakespeare theater, we have to do at least one Shakespeare. So we want to do this, but we want to do it to the level that’s our growing edge. So what would that mean?’” Jubilee in the Twin Cities

For some theaters, adapting to the Jubilee year was easier than others. The Uprising Theatre Company in South Minneapolis has been embodying the ideals of the Jubilee year since its founding in 2015, said artistic director and sole full-time staffer Shannon T. L. Kearns.

Its first production of the season is “Doctor Voynich and Her Children,” which deals with the issue of reproductive rights and access to medical care.

The three subsequent shows of the year will see themes of queer family planning, identity and gender, mental health and homelessness.

Mixed Blood Theatre is among the largest theater groups in the Twin Cities. Founded by Jack Reuler in 1976,  the theater has a reputation as a catalyst for social change.

Today, Reuler still works as the artistic director of the theater, guiding the vision of the company. When the Jubilee was announced, he set aside his plans for retirement, which was set to take place this spring.

“I said, ‘Could I have two more years?’ So I can both participate and be a leader in Jubilee and then help orchestrate what happens after that one year,” Reuler said. “It’s an important thing to me.”

Nissa Nordland is a company member of the Theatre Pro Rata and the Umbrella Collective, both of which are Twin Cities theater groups participating in the Jubilee.

When asked if the theater industry is behind or ahead of other industries in terms of social change and progressiveness, she said: “I think we’re catching up. There’s still a disparity in theater, especially with places that focus on the classics.”

“And I do think Minnesota is really working on that. I really see it happening, I think there’s still more work to be done. That’s always the story.”

Jubilee at the U

The University of Minnesota’s commitment to the Jubilee year includes uplifting the work of director Sara Pillatzki-Warzeha, a graduate student of theater historiography who specializes in Indigenous research.

Pillatzki-Warzeha is of Dakota-German descent, and her research focuses on Indigenous performance and storytelling. She will produce “Men on Boats,” an all-female spin on the expeditions of America that took place in the late 1800s.

“Even though it [is] historical, it’s a very funny play,” Pillatzki-Warzeha said. “And I just think that in our huge body of theatrical work that’s available to us, there’s not a huge body of work that is comedy for a cast of entirely women.”

The Theater Pro Rata is a local group utilizing University space at the Bell Museum to ring in the Jubilee. “Silent Sky,” a production about Henrietta Leavitt, opened last weekend at the Bell Museum’s Planetarium.

Carin Bratlie Wethern, the artistic director of Theatre Pro Rata, said but the show is written and directed by women, making the production a perfect fit for the Jubilee year.

“So we have all female playwrights, all female directors,” Bratlie Wethern said of Silent Sky. “We’re not a company that has a mission focus towards doing plays by women, but that’s an easy goal to achieve — there’s lots of plays out there.” While the Jubilee is a cause for celebration, Grossman explained that there could be various reasons for institutions not to take part.

“One reason people don’t pledge is because they haven’t heard about it,” Grossman said.

Theaters might also be hesitant to come aboard because they are concerned that the Jubilee will determine their programming or create an extraneous requirement. Some may feel they don’t want to have their programming and production decisions determined by an outside source such as the Jubilee, Grossman said.

Another concern that Grossman raised is the question of how marginalized communities will be treated and if they will actually be treated the way the Jubilee intended.

“Anyone that wants to do it, does it … but I know a lot of people who aren’t pledging who are still doing the work,” Grossman said.

So, participation is voluntary and for organizers, the work is unpaid.

But for Channer and others on the committee of the Jubilee, the pay-off is greater than money.

“It’s worth it because we can’t pretend that our theaters are keeping up with the cultural moment we are living in if it’s showing only the work of a very small sliver of our culture,” Channer said.

Correction: a previous version of this story misstated the makeup of Silent Sky’s cast. It was written and directed by women, but does not have an all-female cast.