Arnorsson owns the school record for lowest score in a round with a 62. 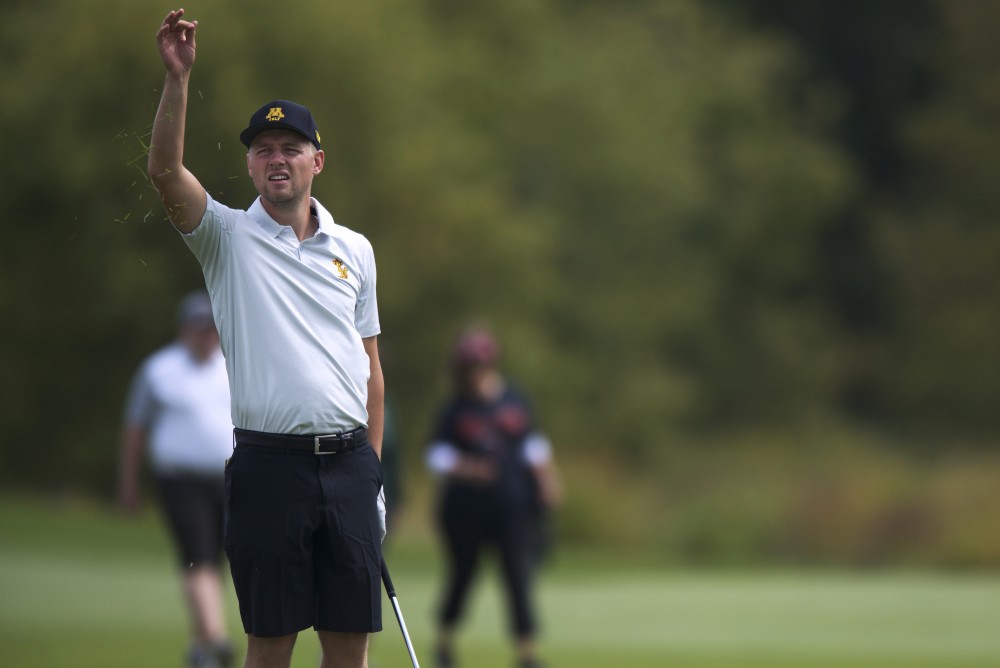 Senior Rúnar Arnórsson checks the wind during the Gopher Invitational at Windsong Farm Golf Club in Independence, Minnesota on Sept. 10, 2017.

When Arnórsson plans out his day, he makes no room for sitting down. He is either cooking, working on homework or playing golf. He will go to bed at 2 a.m. and wake up at 5 a.m., not feeling a thing.

Arnórsson grew up with summers in Iceland that offered 24-hour sunlight. In the summer, Arnórsson would call up his friends after dinner and they would start golfing at 11 p.m. They’d finish at 2 a.m. He often showed up at the golf course he worked at a few hours before his shift. The extra sunlight offered extra time to perfect his craft.

“You can give that guy two, three hours of sleep and a couple of power naps, and he is good to go,” senior Grady Meyer said. “You can never count that guy out and that is why [the team] thinks he runs on batteries.”

Arnórsson is the second European born-player to come to Minnesota in 11 years. He began as a 22-year-old freshman. Along with bringing a certain way of life, teammates said he brought maturity to the team that goes beyond playing golf. He has used the skills he learned in Iceland to help him set the school record for lowest round in a tournament, but also to help his teammates.

‘I can reach out to him’

Iceland carries American television shows and sports. Arnórsson would wake up early and catch Tiger Woods golfing and winning majors in the prime of his career. A young Arnórsson would dream of being like Woods one day.

He didn’t pick up a club until his brother came home with an old set from camp. He has played the game ever since. Arnórsson would go out to the backyard and practice his swing by himself. Later, he went to a summer camp himself, where he met a golf coach from his hometown club, Tomas Adalsteinsson. Adalsteinsson said he has known Arnorsson’s family for about 20 years.

His coach from Iceland, Adalsteinsson, moved to San Francisco to work on his master’s degree, where he met his wife. His wife happened to be from Minnesota. From there, Adalsteinsson was offered a job as McAlister College’s head golf coach, which is about five miles from the University of Minnesota.

Adalsteinsson became good friends with John Carlson — then-head coach of the Gophers men’s golf team — because they recruited together and worked with each other at camps. Adalsteinsson told Carlson about Arnórsson to fill the vacant scholarship spot after a recruit for the Gophers did not pan out. Then, Carlson sent a message to Arnórsson on Facebook to figure out when the coach could see the potential recruit.

“At the time, I knew Arnórsson kind of had given up on the idea of playing collegiate golf,” Adalsteinsson said. “I told coach [Carlson], ‘I can reach out to him.’ I knew he was not on the line to go to a southern school, so Minnesota might be a good fit for him, and he could be a trail blazer and go to a northern school.”

Carlson watched him play in an international tournament and after, offered him a scholarship that the 22-year old accepted. He began his freshman season with the Gophers in 2014.

Adalsteinsson said that Arnórsson lived with him and his wife for a few weeks prior to move-in day, and that they helped him adjust to life in America.

“His parents really liked the idea that they have someone they know and they trust,” Adalsteinsson said. “I was more than willing to help him transition to life back here.”

Unlike any golf course in America, the course where Arnórsson learned how to play traded thick, green rough for cooled lava that turned into rock. Iceland is home to 130 volcanoes, and Arnórsson’s home course is not far from one.

He had to be accurate with his shots because if they went too far right or left, his ball would be sitting on cooled lava. No one wanted to hit their ball off a rock because their clubs were too nice to be beaten up. Arnórsson said people have to be laser-focused on the front nine of the course where the lava is. Most people carried a beat-up golf club called a lava club in case they went too wide with their shots.

Growing up on a course where accuracy is key helped Arnórsson become the golfer he is today. Before coming to Minnesota, he placed second in the Icelandic Match Play Championship and finished as the top-ranked golfer on the Icelandic Elite Tour. By then he was 21, but he still did not have any plans regarding collegiate golf or where his life was going to go.

Arnórsson said he plans to join the European Qualifying school, or Q-School, in the fall. The school is a minor league program for golf. Aspiring golfers like Arnórsson can join this tour and if they play well and win, they earn their card for a major event.

First, Arnórsson will play in his last spring semester of the season and finish his senior thesis. He hopes to play professionally in the future, but right now he will focus on his final season at Minnesota. The Gophers head to Tiger Invitational Sunday.

As for what he expects from the team this spring, head coach Justin Smith said with Arnórsson’s guidance, the team could have a successful spring.

“He has just been himself and he doesn’t try to be anybody else,” Smith said. “He doesn’t do anything that he knows he can’t, he has his own identity and he just goes with it.”