Potomak continues to come up big for Gophers

The sophomore leads the nation in game-winning goals with five. 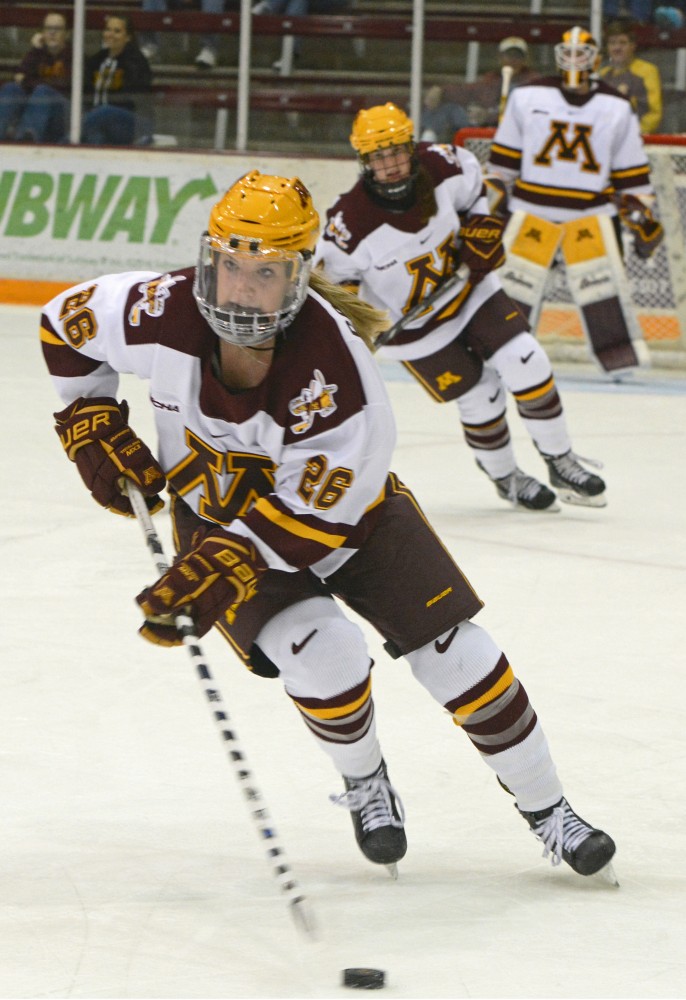 Sarah Potomak immediately made an impact with Minnesot

a as a rookie, and now she’s already proving to be a key player for the Gophers early into her sophomore season.

Potomak has scored eight goals in as many games, which includes four-straight game-winners.

“When the bright lights go on, [Potomak] is always there,” said head coach Brad Frost. “I don’t think there’s any better way to lead than to give great efforts in practice and in games and then be rewarded for it.”

Potomak was one of the most productive forwards in the WCHA in her rookie campaign and led the national champion Gophers with a plus/minus of 55, and tallied 15 goals and 39 assists.

The forward played with Gophers greats Amanda Kessel and Hannah Brandt toward the end of the season. But with both players graduated, she’s now playing with the likes of senior forward Dani Cameranesi and junior forward Kelly Pannek.

Pannek has assisted Potomak on all of her recent game-winning goals. The trio is building chemistry through communication and hard work.

“This is our first year really playing together, and we all have the same mindset: get the puck in the net,” Pannek said. “We like how we’re playing, and we’re having fun with it.”

Potomak scored a hat trick in her first game of the weekend series at Ohio State — the first of her career.

She followed that performance up with another game-winner against the Buckeyes to give the Gophers a 2-1 victory and series sweep.

Game-winners aren’t new for Potomak, though. She sent Minnesota to last year’s national championship with an overtime goal against Wisconsin and gave the Gophers the first goal in the national title game.

“I think I’m the type of player that does well in high-pressure situations,” Potomak said. “That’s what my role is, and I think I’m trying to accomplish that role to the best of my ability.”

Potomak’s consistency doesn’t come as a surprise, but she has taken on a new role this season as more of a leader.

Her ability to come up big in tough situations has proven vital this season, as she’s helped to dig the team out of deficits numerous times.

“On the ice, the way she plays, there’s so much confidence there,” Pannek said. “That’s where anyone, freshman through senior, is going to look to her and get a little extra confidence.”

Potomak’s numbers this season certainly speak to her development, as she’s currently tied for the most goals in the country with eight and leads the NCAA with five game-winners.

She too has seen herself step up this year, though she said her presence on the ice is a small part of building a great team.

“I’m definitely not a freshman anymore, so there’s more expectation this year,” Potomak said. “I’m just trying to build off last year and help my team go as far as we can go this year.”