Activists hang out to protest 3M 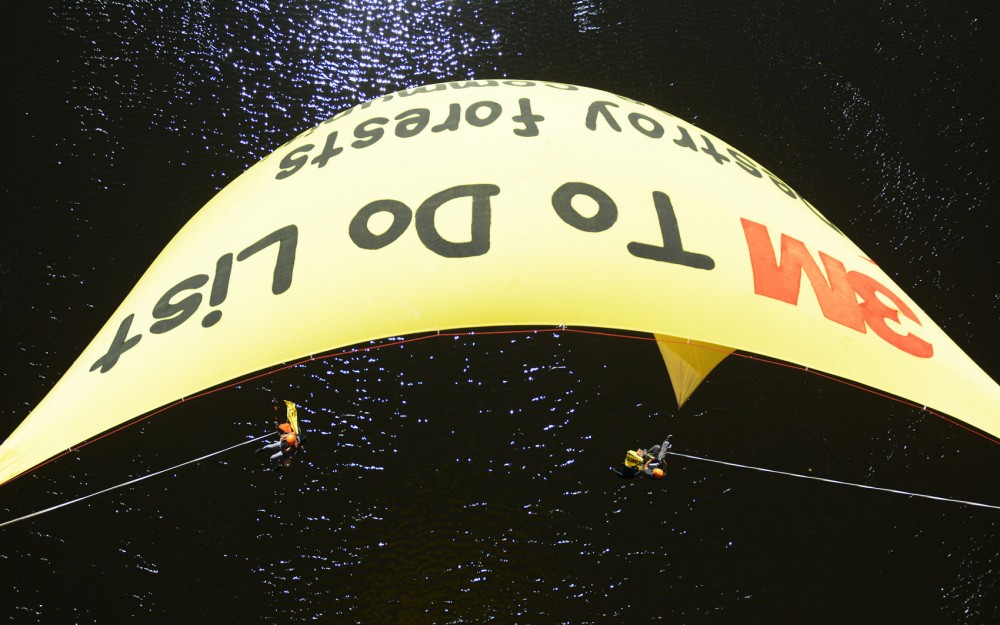 After dangling over the Mississippi River for hours in the unusually warm October sun, two environmental activists hoisted themselves back onto the Washington Avenue Bridge, where they were promptly arrested.

Sen Holiday and Carrie Feldman, both in their 20s, hung from a 40-square-foot banner made to look like a Post-it for four hours to highlight 3M’s “destructive environmental practices.”

Holiday and Feldman, both Twin Cities residents, are volunteers for the nonprofit ForestEthics, which advocates for large-scale corporations to upgrade their environmental practices.

Around 1:30 p.m., the two exhausted women started scaling up the safety cables as wind grappled with the cloth, reaching ground nearly 40 minutes later.

After rehydrating and recovering, the two were arrested by University of Minnesota police for trespassing and transported to the Hennepin County jail. They are not allowed on campus for a year.

Jim Ace, senior campaigner for ForestEthics, said the display on the campus bridge is “iconic.”

“It’s an important bridge for the city,” he said. “It’s a bridge that serves the student community. … Students are a major part of our strategy.”

UMPD Deputy Chief Chuck Miner said the protest tied up a lot of police resources because multiple crews had to man the scene until the suspended climbers were safely back on the bridge.

“If someone fell in, we’d definitely need to get someone in the water right away and find a way to get them out of there,” Lt. Troy Buhta said during the protest.

Minneapolis police boated to the scene around 10 a.m. Five firefighters followed, and multiple city and campus police officers were on guard at the scene throughout the day.

University police officers made several attempts to get the suspended climbers back on the ground, but the two women didn’t raise themselves or their large banner until about 2 p.m.

“I get that you want to get a message out, but I don’t think this is the right way to do it as far as public safety,” Buhta said. “There are other ways … without putting yourself in danger.”

Feldman said in the release that it’s her responsibility to hold companies like 3M accountable because Minnesota is her home.

“We want students to send a message to 3M that they are misleading consumers about their environmental record,” Ace said.

According to the corporation’s paper sourcing policy, “3M is committed to sustainable forest management and the conservation of natural resources.”

Biology sophomore Mackenzie Gierke said the “Post-it” was hard to read and the protest’s message was unclear. Many others peering over the edge of the bridge agreed.

In 1999, a Minneapolis resident and animal rights activist hung from Moos Tower for six days and was arrested for fourth-degree burglary and criminal trespassing, Miner said. Since then, there hadn’t been any similar displays on campus before Monday, he said.

University graduate student Ben Meyers said the “crazy” display caught his eye on his way to class, and he said 3M’s “destructive” environmental practices are something new to him.

University alumnus Nolan Morice, who is also co-director of a Minneapolis media company, said the activists’ approach was creative.

“It’s a good way to get attention,” he said.