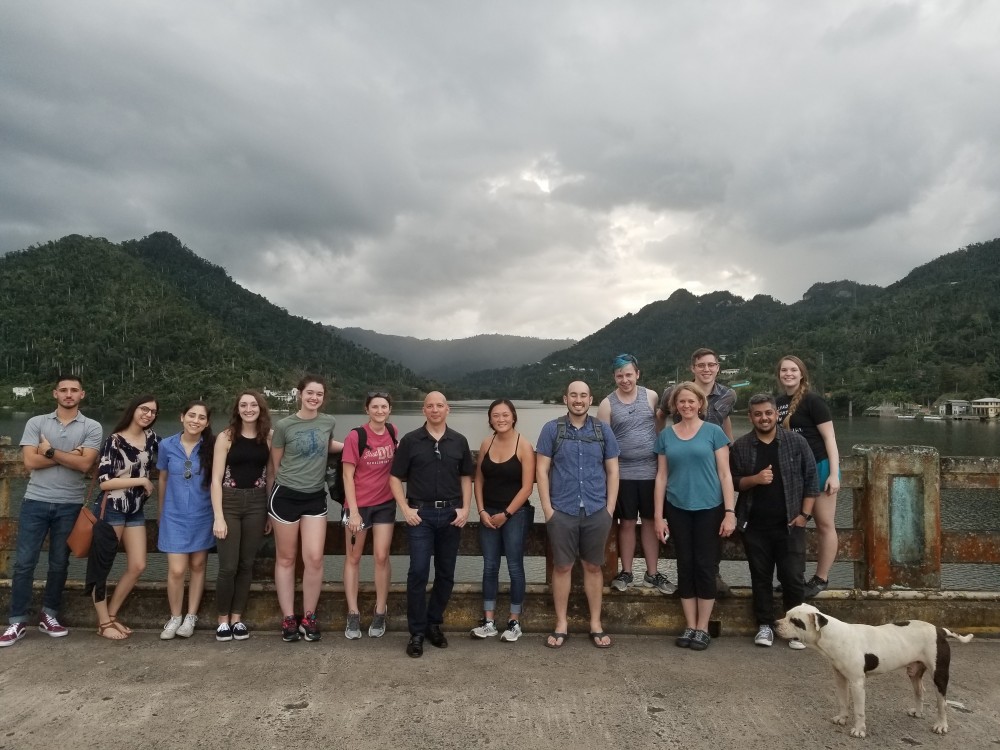 Members of the Global Convergence Lab on the Don Bocas Hydroelectric Dam in Utuado, Puerto Rico.

After Hurricane Maria hit Puerto Rico in 2017, many went without electricity for months.

Now, students and faculty from the University of Minnesota are working with partners on the island to explore different energy platforms that could withstand future natural disasters.

University students went to Puerto Rico this month through the University’s Global Convergence Lab. They met with researchers, members of nonprofits and community members to learn about the challenges that come with energy transition on the island.

“The trip was focused more on building a long-term collaboration,” said Gabe Chan, an assistant professor in the Humphrey School of Public Affairs.

The lab is a course made up of 11 students from the Humphrey School, the Institute on the Environment and the School of Architecture. Having students of different majors and backgrounds helps provide different perspectives and makes the work more valuable, Chan said.

While in Puerto Rico, lab members visited communities and learned about how energy is currently operating.

“I think it is important to be on the ground and talking to folks because you get such a limited, narrow and sometimes inaccurate view of what is going on in a place [by] only reading news articles,” said Elizabeth Arnold, a graduate research assistant in the Chan Lab who went to Puerto Rico.

Chan said the intent of the trip is to start a long-term relationship through collaboration between Puerto Rico and the University.

“[It] is centered around a couple of projects between organizations with similar goals and we can go back and forth with what is going on in Minnesota and … Puerto Rico and share and learn together,” Chan said.

The lab is part of the Resilience through Innovation in Sustainable Energy (RISE) platform, which works to change how universities interact with communities and other entities after natural disasters. Jacob Mans, assistant professor in the School of Architecture, helped create the network and the partnership between the University and researchers in Puerto Rico. Mans traveled to Puerto Rico in 2018 and helped design a community solar powered station there.

Cecilio Ortiz García, a member of the Instituto Nacional de Energía y Sostenibilidad Isleña (INESI) and an organization part of RISE, said the University is helping by bringing the message of this collaboration to other universities.

“A lot of universities came after Hurricane Maria but weren’t collaborating. …The idea could be that all these universities interested in working in Puerto Rico could share that information in a broader network,” Chan said.

Instead, the island is reverting back to the prior electric system, she added.

“INESI is calling attention to universities and the government that we have resources to run better electrical systems,” Ortiz García said. These improved electrical systems include things such as solar powered energy and electric cooperatives, which are owned by users.

The relationship with the University shows the Puerto Rican government that INESI has legitimacy, Pérez Lugo said, adding that the collaboration takes off some of the burden of having to reach out to other universities.

Now that members of the Global Convergence Lab are back in Minnesota, they are planning to present on their trip and have invited students and faculty from the University of Puerto Rico to visit Minnesota in May.

Correction: A previous version of this story misstated the location where the photo was taken. The correct location is the Don Bocas Hydroelectric Dam in Utuado, Puerto Rico, not the Ponce Neighborhood Housing Service in Ponce, Puerto Rico.