Collaborating from different time zones, John Klukas and Michael Cina devised an oppositional look at the chaos of living. 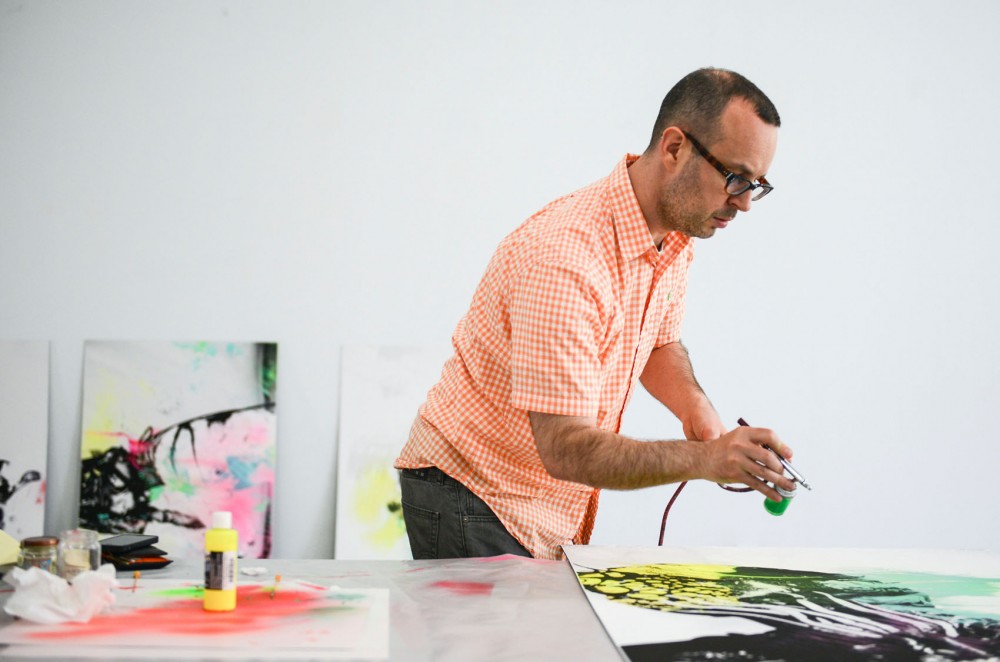 Sometimes it takes 40 tries to get the desired result. For perfectionists like photographer John Klukas and painter Michael Cina, this is an infuriating delight.

Their joint exhibition at Minneapolis’ Public Functionary gallery, “She Who Saw The Deep,” lays their multiple attempts bare for all to see.  Klukas lives in New York City and Cina lives in Minneapolis, so the pair decided to work on the large prints via file sharing.

This back and forth process illuminates their trial-and-error style — each edit is layered on top of the other, from Klukas’ manipulation of shadow through programs like Photoshop to Cina’s explosions of paint. They come together to create one singular, chaotic image — and there are 20 unique pieces in the exhibition.

“Some of these pieces got passed back and forth 10 times. Some of the files are 20 gigabytes for one piece,” Cina said. “Computers, even like, four years ago would have had a hard time with this.”

Their process involved talking with one another on the phone for hours at a time as they would make an edit, scan it into the computer and send it off for another round of tinkering.

“It made this project possible,” Klukas said. “But we don’t want technology to undermine the way we present it. It’s printed at the size it is because we think people ought to experience it in a physical size.”

Thematically, “She Who Saw The Deep” gets its inspiration from “The Epic of Gilgamesh.” A hallmark of Mesopotamian myth, the tale details the travels of a king and his struggles with mortality.

“I was particularly inspired by Gilgamesh’s search for his friend Enkidu after his death — Gilgamesh is searching for eternal life,” Klukas said. “So he has to scale this mountain alone, and there’s a section where he’s engulfed in darkness for 24 hours until he reaches this beautiful light.”

While the Gilgamesh is never literally depicted in the display, the pieces within it play with the balance between intense darkness and heavily saturated brightness.

Klukas’ photos are all of one model — they’re all shrouded in heavy black and grey tones, with some images isolating a model’s head in one direction and others showcasing her full body. The model, as each piece’s base layer, acts as a figure to give shape rather than to show any distinct characteristics. Cina’s contribution rounds out the pieces with bursts of color that resemble neon nebulas.

On the whole, Cina and Klukas said, the images represent the constant tension of figurative darkness and light in life. When these opposites collide in “She Who Saw The Deep,” they create pictures that maintain a haphazard coherency, reminiscent of Jackson Pollock’s action paintings.

“There’s a constant blowback between the chaos and the order to the work. I mean, when Mike is throwing paint, he has no control over where that paint is going to go,” Public Functionary curator and director Tricia Khutoretsky said.

Khutoretsky’s interest in the exhibit piqued when she saw how the two artists interacted.

“Mike might do something that John decides to undo. As artists and people, they’re very different,” Khutoretsky said. “John is a realistic fashion photographer; Michael lives in abstraction.”

Klukas and Cina met through mutual friends when Klukas lived in Minneapolis, and the two have been friends ever since. Cina said the dynamic between himself and Klukas is what influenced their decision to collaborate.

“He’s way wilder than I am. I guess I don’t know if I’d use that word — he gets really dark. I’m more figurative, my stuff is bright and colorful. That’s one of the reasons I use these huge colors. I’m looking for maximum saturation,” Cina said. “We’ve always had this relationship — you know how when you meet certain people you just click with them? It was quick like that.”

Klukas and Cina began work on “She Who Saw The Deep” last spring, and both artists said they will be pleased to see the exhibition finally open this week, after more than a year of work.

The two will be present for an artist question-and-answer session the day before opening, and Public Functionary will showcase their work through July 13.

“I had to take a leap of faith with this collaboration,” Klukas said. “I’ve never worked in a feedback loop before, and I’ve grown as an artist because of it.”