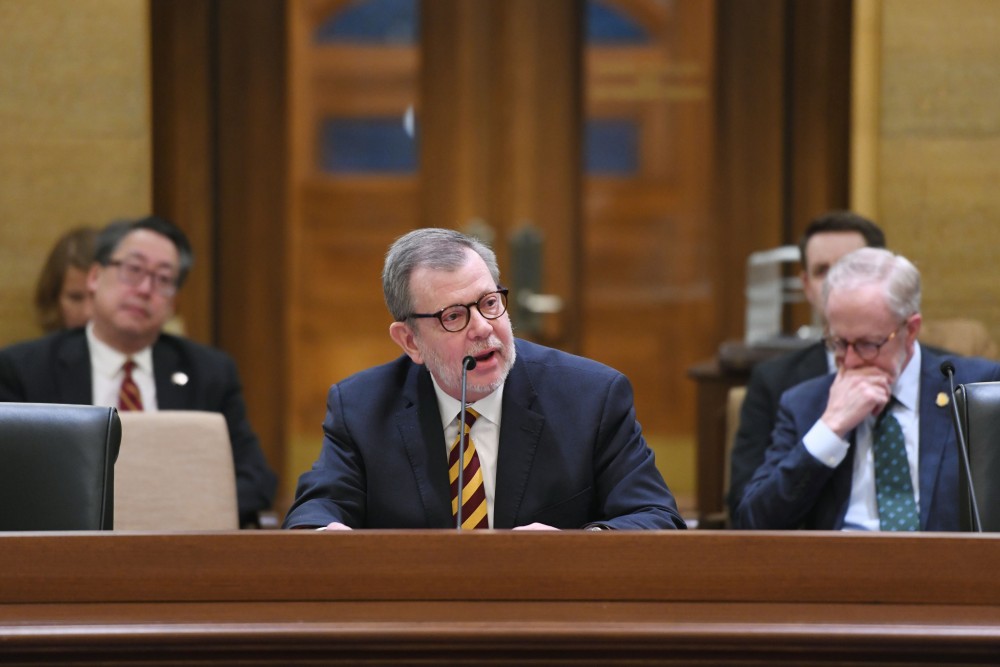 The University of Minnesota presented a realistic funding request to the Legislature Tuesday, lawmakers said.

During his first testimony of the 2019 legislative session on Tuesday, University President Eric Kaler highlighted the University’s importance within the state while urging lawmakers to fully fund the school’s budget and capital funding requests. This session, the University will ask legislators for $87 million in additional funding for the next two years and $232.3 million in infrastructure funding.

“The University of Minnesota is committed to strengthening Minnesota’s future. However, we cannot do this alone,” Kaler said at a Senate higher education committee meeting. “We rely on a strong partnership with the state to continue to provide affordable education, attract and retain world-class researchers, strengthen communities and businesses and improve the lives of Minnesotans.”

Kaler, along with University administrators and students, stressed the school’s importance in the state and the challenges it faces, including the need for competitive faculty compensation and investing in student services.

“I think that what the president did do today was outline the needs for the University of Minnesota — they’re not wants, they’re needs,” said Sen. Gregory Clausen, DFL-Apple Valley.

Sixty percent of this year’s ask, according to Brian Burnett, University Senior Vice President for Finance and Operations, would be for competitive faculty and staff compensation.

“Different from recent years, we are not asking for a list of programmatic or service initiatives that might add to our current portfolio,” Burnett said. “Instead, we are asking for one item. An increase in our base that will allow us to address priorities across our basic foundational mission activities.”

The Legislature provided $54.62 million of the University’s $147.2 million request during its last biennial budget ask. This “modest” ask may be more tangible, some lawmakers said.

“Whenever a system has a prudent ask, it helps,” said Sen. Jim Abeler, R-Anoka.

Abeler said while the University’s ask was reasonable, it may still not be fully funded.

“There’s more people who wanted to serve on the higher education committee than were able to because of the spots,” Bernardy said. “People are really eager and really value whether they’re serving on that committee.”

With University President-elect Joan Gabel set to take over as University president in July, Kaler is representing the University at the Legislature as president for the last time.

“The U of M came in and gave a really strong presentation. Their president was well-received and they’ll be getting fair consideration when they start passing out the money at the end of April,” Abeler said.