Woken off to productive start in rookie season with Minnesota 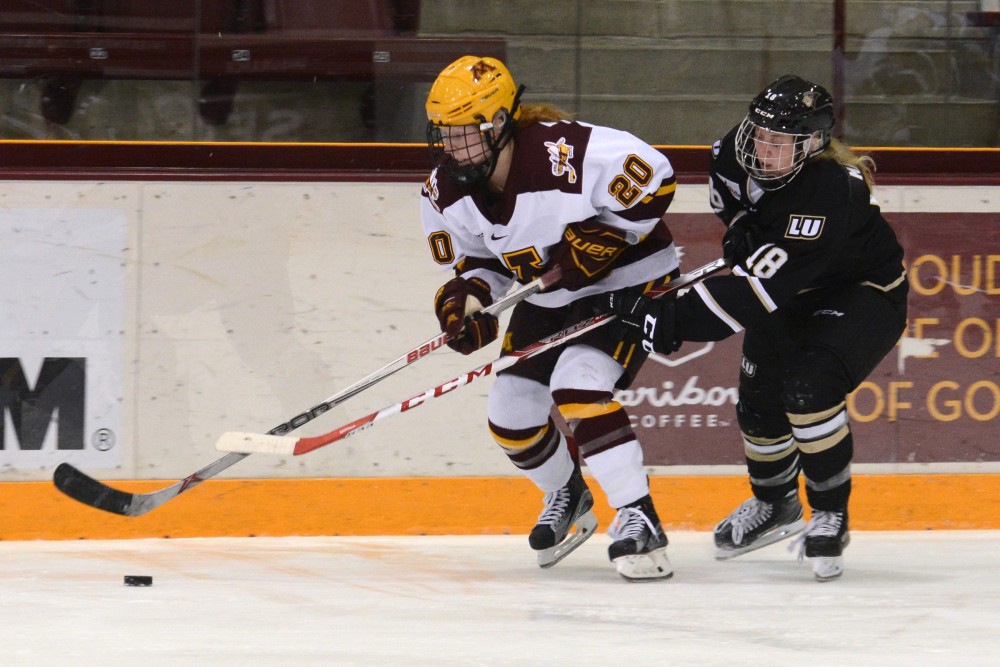 Freshman forward Alex Woken battles for the puck at Ridder Arena on September 30, 2016.

Alex Woken has only played in two games for Minnesota so far, but she has wasted no time proving what she can bring to the team.

Woken showed her scoring prowess early in the team’s opening series against Lindenwood last weekend with a goal and an assist in Saturday’s game.

“Alex has come in and already filled some big roles for us,” said assistant coach Bethany Brausen. “We had her playing with the top line this weekend, and I think that she has definitely impressed. She’s doing some really great things, so we’re super excited about all the potential she continues to show.”

Woken, a Fargo, North Dakota native, has made a name for herself in the hockey world the past few years.

Woken was a standout at Shattuck-St. Mary’s High School, scoring 188 points in 164 games in her three years there.

She won a national championship in her senior year with the team — which included fellow freshman teammate Patti Marshall — after finishing in second as a junior.

Woken has experience at the international level as well. She earned two gold medals for the United States at the 2015 and 2016 IIHF U-18 Women’s World Championships.

She credits the speed of play and skill of her opponents at the international level in preparing her for the collegiate stage.

Woken has already had the opportunity to play among plenty of skill in her short time with Minnesota.

The winger played on the first line during Friday’s game with senior assistant captain Kate Schipper and junior Kelly Pannek and took three shots on goal.

Woken then played with junior Caitlin Reilly and sophomore and last season’s National Rookie of the Year, Sarah Potomak.

The trio set up for two goals together and combined for seven points. Woken scored on the lone shot she took during the game.

“These freshmen are going to do amazing this year,” Potomak said. “Especially when I was playing with [Woken] this last weekend, it was a lot of fun, and there was a lot of chemistry there. As the year goes on, we will continue to get better and better.”

Woken is adjusting well on the ice so far and has also been more relaxed in her new campus environment than originally anticipated.

“I was nervous coming in because it’s such a big campus,” Woken said. “I was like ‘Oh my gosh, I’m never going to make it to my classes on time. I’m never going to meet anyone. It’s way too big.’ But these past four weeks have been the complete opposite.”

Woken may have a lot on her plate in the future, as she’s interested in pursuing a neuroscience major and eventually going to medical school. Both of her parents are athletic trainers.

But if Woken’s progress so far is any indication of how her time with the Gophers will proceed, she should be in good shape on the ice and in the classroom.

“It’s a lot of time management [and] fitting everything in,” Woken said. “It’s been hard but definitely manageable.”