Up-and-down Gophers split against No. 1 Wisconsin 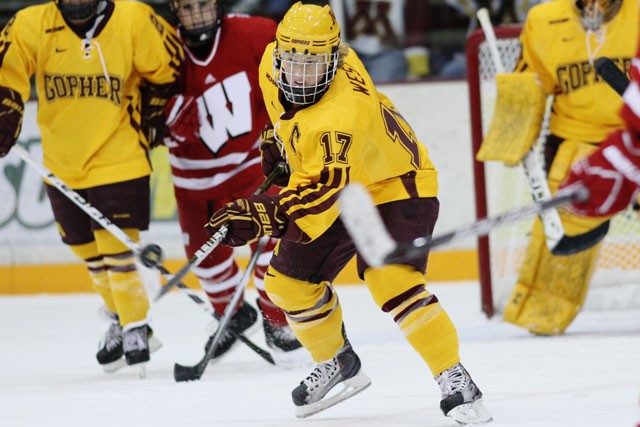 Senior Emily WestâÄôs return propelled the Gophers womenâÄôs hockey team to its finest offensive performance against No. 1 Wisconsin on Friday. But on Saturday, that same offense was nowhere to be found. While the Gophers salvaged a series split with heavily favored Wisconsin, SaturdayâÄôs 5-0 drubbing at the hands of the Badgers was tough to swallow. âÄúAfter such an emotional win last night, you hope that the kids can ride that into today,âÄù head coach Brad Frost said Saturday. âÄúWhen you play like the way we played tonight, youâÄôre going to get blown out of your building, and we did.âÄù The Gophers (6-5-0, 3-4-0 WCHA) now have three home losses this season, the same amount they had in the previous two regular seasons combined. They head into an early bye weekend 12 points behind Wisconsin in the WCHA standings. After scoring only 10 goals in four games against Wisconsin last season, the Gophers scored six goals in the first two periods Friday night. Wisconsin took a 1-0 lead early in the first, but Madison-native Amanda Kessel answered right back when she boxed out WisconsinâÄôs Brittany Haverstock and fired the puck past WisconsinâÄôs first goalie of the evening, Alex Rigsby. The Gophers, breathing a collective sigh of relief for being healthy for the first time all season, then lost Kessel midway through the first period to a shoulder injury. West and Terry continued the scoring barrage, giving the Gophers a 3-1 lead heading into the second and prompting Wisconsin coach Mark Johnson to pull Rigsby in favor of Becca Ruegsegger. The Gophers welcomed Ruegsegger into the net with a three-goal second period, including a goal by West seven seconds into the second period. Wisconsin cut the deficit to one at the end of the second, but the Gophers settled down defensively, and Sarah Erickson added her second goal of the evening to seal the game. While the Gophers managed only 22 shots on goal, when they did shoot, they seemed to have a hard time missing the back of the net. âÄúWe got some breaks, but we had to work for them to get them,âÄù Frost said. Frost switched up the lines to provide better balance across all three lines. He broke up the usual combination of Terry, Sarah Davis and Becky Kortum, spreading the trio across the first three lines. âÄúWe tried to just put a lot of balance on all of our lines, really mix them up, and really get not necessarily one top line but three real good lines,âÄù Frost said. âÄúWe wanted to counteract their depth, and we were able to do that.âÄù The line switches helped create balanced scoring on a night in which 11 players, including goalie Noora Raty, tallied at least one point. Playing without the injured Kessel on Saturday, the Gophers allowed five goals in the first two periods while struggling to generate offense. âÄúWith a team like Wisconsin, theyâÄôre going to do quite a lot of damage with the time and space we gave them,âÄù West said. West, who was out of the lineup for over a month, was quiet in her second game back, but Frost said sheâÄôs still adjusting. âÄúItâÄôs hard for somebody like that to come back the next night and have that same jump,âÄù Frost said. While freshmen Terry and Kessel lead the Gophers in scoring, Frost hopes the veteran players can produce more. âÄúLast night our veterans started supplying some of the offense which was much needed,âÄù Frost said Saturday night. âÄúIn order for us to be successful, theyâÄôre going to have to continue to do what they did last night.âÄù