With Rhoda as the starter, Johnson should see increase in role 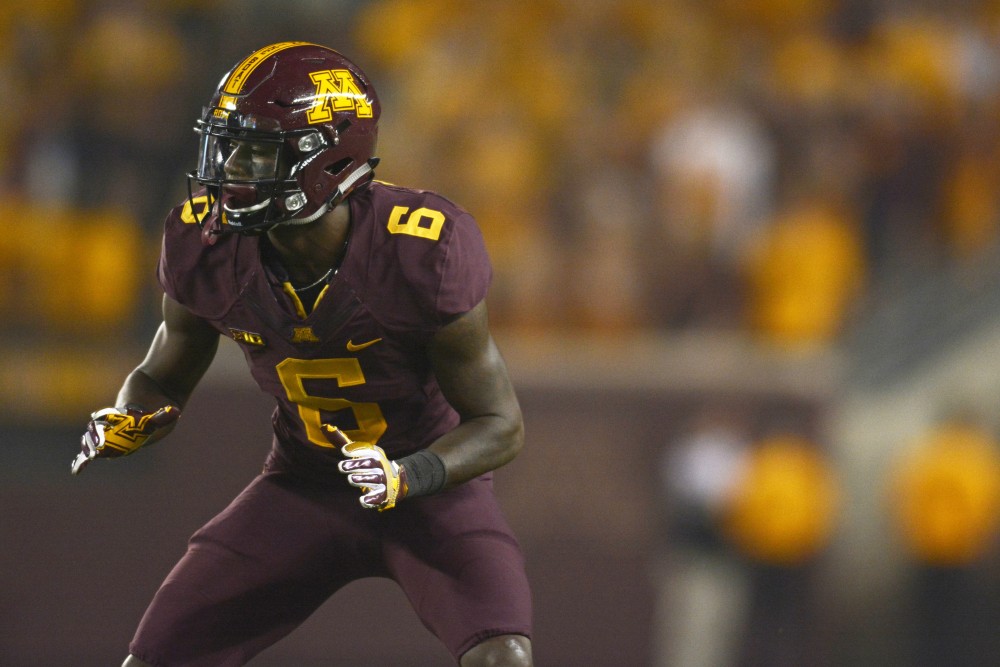 What does it mean for Tyler Johnson to see Conor Rhoda named starting quarterback?

Rhoda and Johnson have connected on many passes in just two games this season, and now that Rhoda will be getting most of the reps at practice, and most of the playing time in games, his top target should see an increase in yards.

Johnson is in his second season as a wide receiver, and he is proving why the switch was the right fit.

The Minneapolis native played high school ball just a few miles from campus at Minneapolis North High School, where he was quarterback.

Johnson found his way to the University of Minnesota, where he became a receiver.

“[Our] relationship has been growing,” Johnson said. “I look forward to growing day by day with Rhoda, and I feel like it is going to be a good journey.”

As a first-year wide receiver with Mitch Leidner at quarterback, Johnson totaled just 141 yards and one touchdown last season.

“I think he was very hungry,” said wide receiver Eric Carter. “He just took his game to another level [this offseason].”

Now with more experience and Rhoda at quarterback, Johnson met his 2016 total in just the first half of the first game, and now, two full games in, he has 268 yards and two touchdowns.

Head coach P.J. Fleck alluded to this chemistry not being for the long term.

“Just like when you play multiple quarterbacks, I don’t think that necessarily changes,” Fleck said. “At times, I wish we had the position of ‘OK, well, this is going to be our four-year [starting quarterback].’ We’re not in that position yet. In a few years, maybe we will be.”

While Rhoda is certainly not back with the team next season, Johnson is only a sophomore, with most of his collegiate career ahead of him.

Rhoda and Johnson’s chemistry has been evident beyond just the completed passes.

Rhoda so far this season has passed to Johnson 10 times of his 19 completions.

Rhoda also had 334 yards on the season, with 268 going to Johnson alone.

Monday it was announced that Rhoda won the competition for starting quarterback against co-starter Demry Croft.

“It’s a really great feeling,” Rhoda said. “Just going through everything I’ve gone through over the last five years, a lot of days that I never thought this would ever happen, it really just brings everything full circle.”

The decision came from Fleck Monday after Rhoda’s convincing performance both on the field and as a leader.

Rhoda was 7-8 last week with 158 yards and 1 touchdown, with four of his passes, 127 yards and the touchdown going to Johnson.

“I think they have a great relationship,” said offensive coordinator Kirk Ciarrocca. “[It’s] one that is continuing to grow with time.”