The company broke its promise of a finished building to hundreds of students for fall 2017. 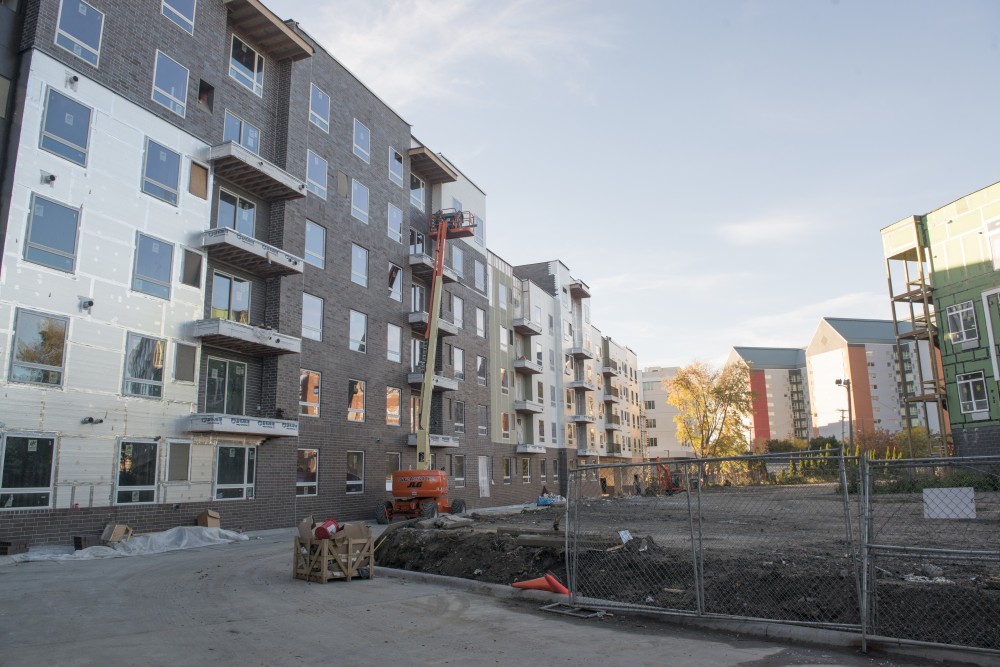 Construction workers continue work Monday on the unfinished Prime Place Apartments where some residents have already moved in.

Moving into a half-constructed apartment clouded with dust and paint fumes a month later than promised was not on Hannah McMahon’s to-do list this fall.

McMahon, a senior at the University of Minnesota, moved into Prime Place Sept. 30 and started the Facebook group.

Construction of the six floor, 195-unit building is split into two phases, with current residents living in the phase one space that was supposed to be completed at the start of September.

Prime Place apartments declined to comment for this story.

Kaylee Kopp, University senior and Prime Place resident, said occupants were told controlled access at main building entrances would be ready the week they moved in.

As of Oct. 16, the front doors have no controlled access to keep nonresidents out of the building.

Prime Place hired an off-duty policeman about a week after residents moved in due to multiple complaints regarding the building security system.

“[Prime Place] is very inconsistent with the answers they give us,” Kopp said of the missing security system. McMahon said multiple cars were broken into on Oct. 6 in the resident parking garage.

“Honestly a lot of people are… fearful. People don’t want to live there anymore because… they’re scared, and I don’t blame them,” McMahon said.

In Minneapolis, apartment buildings have to meet two sets of requirements in order to legally rent out spaces.

However, it is not necessary for apartments to meet the housing code to get the certificate of occupancy, which ensures the building is safe, Higgins said.

According to the housing code, all doorways leading outside “must be secured by a locking device” and “shall be of a type that will engage and lock automatically.”

A rental property checklist used by city housing inspectors says garages should not be open to trespass.

“As a landlord, you have to provide people with a property that’s fit for the purpose intended, which is to live in,” Dane said. “If you aren’t comfortable living there… then you’re not getting what you bargained for.”

In addition to not meeting housing codes, Prime Place failed to pay the fee for a rental license until Oct. 5 — six days after residents moved in.

Casper Hill, a Minneapolis media relations coordinator, confirmed this, adding that technically, the late payment is a violation.

“The safety of tenants is the reason we inspect and license rental properties,” Hill said in an email. “In this case, the building in question is brand new, passing many fire and building code inspections.” Hill added that while Prime Place should have paid for the license before move-in, “the building was determined to be safe and ready for occupancy.”

Bill Dane, staff attorney at University Student Legal Services, or USLS, said there may be cause for legal action because of the company’s late payment on its rental license.

“Under Minneapolis code, you cannot collect rent for a property that does not have a rental license,” Dane said. “If the codes are applied properly, I think Prime Place is going to have to reimburse people for any rent paid for days that they weren’t actually licensed.”

McMahon said she created the Facebook group to warn future residents of her belief that phase two of the apartment will not be completed by the expected Feb. 1 move-in date — which has already been pushed back multiple times.

A Jan. 11, 2016 land use application summary on the Minneapolis public housing website says construction will continue until summer 2018.

“There are another 300 people that are supposed to be moving in here… and it’s not going to happen, like, just based on the condition of the building,” McMahon said.

The group accumulated 25 members in one day, growing to 114 members as of Monday, she said.

USLS lawyers are working with the students, Dane said, many of whom hope for rent abatement or compensation.

“They lied to us about the status of the apartment and they cheated us into moving in… so we just don’t think the prices are worth what they’re giving us,” McMahon said.

She and two roommates pay $2,100 monthly rent for a three-bedroom unit.

“What we are concerned about is the fact that Prime Place, like so many of the other new housing units in and around the University, represents itself to be sort of luxury living,” Dane said.

Legal proceedings differ based on the case, he said, although more information is still needed to pursue legal action.

“We’re at that stage where really, for the first time now, we’re getting things lined up so we can begin talking to Prime Place about resolving the individual cases,” Dane said.