Minnesota’s lone senior defenseman and the Big Ten Defensive Player of the Year was drafted by the Islanders in 2012. 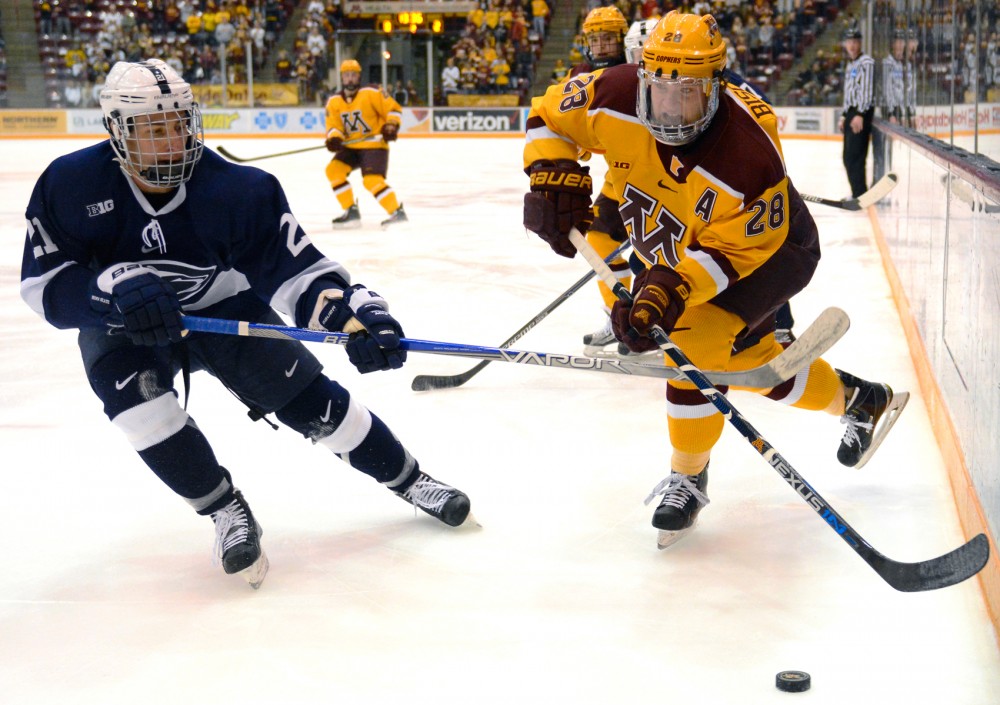 Gophers defense Jake Bischoff fights to maintain control of the puck while playing against Penn State in Mariucci Arena on Saturday, Feb. 6, 2016.

The soft-spoken alternate captain took the first step to his future hockey career.

Senior Jake Bischoff signed with the team that drafted him, the NHL’s New York Islanders, Tuesday.

“I wouldn’t trade the last four years for anything, and I want to thank everyone for supporting us. This will always be a special place for me, and I’m incredibly grateful for everything the University of Minnesota has given me,” Bischoff said in a statement. “At the same time, I’m excited take the next step in my career by joining the New York Islanders organization.”

Bischoff’s contract is a two-year, entry level deal and he will report to the team’s minor league affiliate, the Bridgeport Sound Tigers, in Bridgeport, Connecticut, for the remainder of its season.

The Islanders took Bischoff 185th overall in the seventh round of the 2012 NHL Entry Draft.

Bischoff finished his senior season smashing his career high in points, with 32, 27 being assists. He was named the Big Ten Defensive Player of the Year and First Team All-Big Ten for his efforts.

He served as a two-year alternate captain, and led the Gophers to four consecutive Big Ten titles, and three trips to the NCAA tournament.

Bischoff leaves as the only senior defenseman for Minnesota, with Steve Johnson, Ryan Collins, and Jack Glover taking the reigns as seniors next season.

“I’ve known Jake’s family since before he was born, and it’s been a privilege to have him in our locker room for the last four years,” said head coach Don Lucia in a statement. “Like all of our seniors this year, he has been a great leader for us, and there is no question how much effort and dedication he brought to our program. We are excited for him to take the next step in his career, and we wish him luck with the Islanders.”

The news of Bischoff’s signing comes the day after former teammate Vinni Lettieri signed with another NHL team in New York, the Rangers.