Gophers come back, but lose in overtime to St. Lawrence

Minnesota scored two goals in the third period to end the frame with a 3-3 tie, but lost in overtime 4-3. 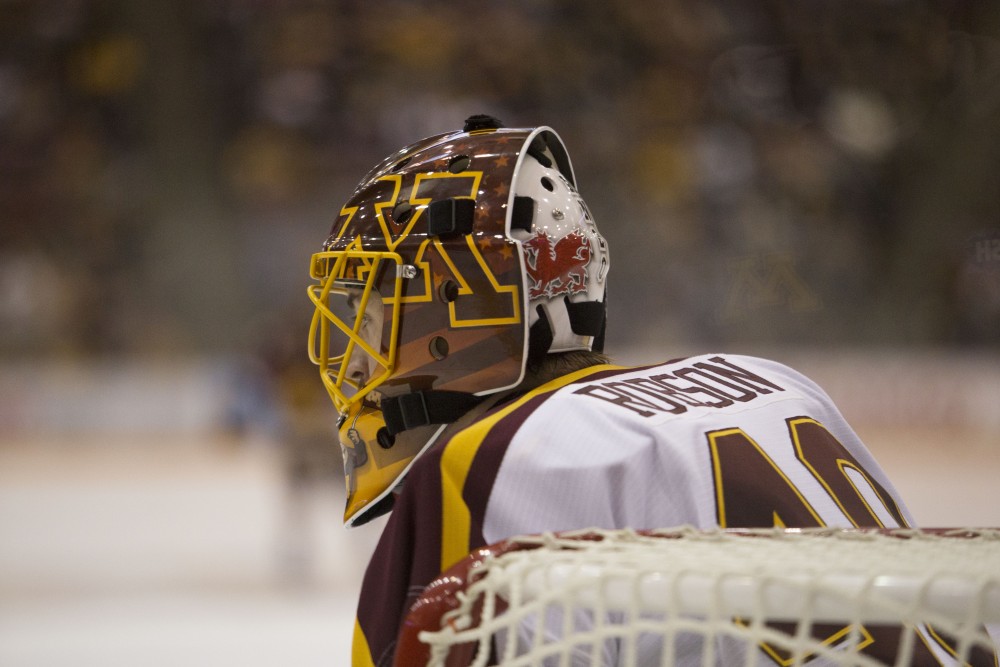 Junior goaltender Mat Robson eyes the puck during the game against the University of Minnesota Duluth on Sunday, Oct. 7 at Mariucci Arena.

Minnesota handed St. Lawrence its second win of the season after a poor defensive performance put the team in the losing column for the fifth time in six games.

“Blindsided us a bit, we thought we were going to come back, piggy back off last weekend, everything we talked about,” said head coach Bob Motzko. “But what we saw tonight, we’ve already seen it this year numerous times.”

The Gophers lost in overtime 4-3 after St. Lawrence (2-8) forward Michael Ederer caught the puck from behind the net and slapped it home with 1:41 left in the five-minute overtime period. Minnesota moved down to 2-5-1, coming off a weekend splitting the series with Wisconsin.

“It’s not fun,” said Gophers forward Brent Gates Jr. “I mean we had some guys come to play tonight, but we had too many who didn’t. It’s got to be a team effort.”

Minnesota rallied in the third period when it scored two goals on 12 shots and gave up seven shots and no goals to the Saints.

Defenseman Jack Sadek scored his first of the season to tie it 3-3 with 4:38 to play. He shot it from the the right side of the blue line, and the puck found its way to the opposite side corner of the net for a 3-3 score, to eventually send his team into overtime. Sadek was the only current Minnesota player to have scored a goal against St. Lawrence in the 2016-17 season, the last time the teams met. It was his first career goal.

“It feels good, especially there late trying to tie it up, trying to get a win for us,” Sadek said.

Other Gophers defenseman Tyler Nanne made the game interesting when he deflected a centering pass from Gates on the penalty kill for a 3-2 score with 13:39 left in the third. It was Nanne’s first score of the season as well.

St. Lawrence tallied 20 shots and two goals in the second period to bring them to a 3-1 lead as the two teams went to the locker room at the second intermission. Gophers goaltender Mat Robson made the Minnesota defense look better than what the scoreboard read as he saved shot after shot, when the Saints had plenty of opportunities in front of his crease in the second frame.

One of his most notable saves of the second was when St. Lawrence’s Keenan Suthers, a 6 foot, 8 inch tall forward had a break away with around 12 minutes left. He pulled a move, but Robson stayed cool in the center of the net and saved it.

“We should’ve been beaten 7-1 if Robson wouldn’t have been so good tonight,” Motzko said. “That’s the story for us is the fact we’re even in the game is great goaltending.”

Saints forward Carson Dimoff broke the tie at 6:38 to play in the second period. Dimoff turned the puck into a rocket with his wrist shot. The puck banged low off the upper post and shot down onto the ice inside of the goal line and into the net. There was nothing Robson could have done as Dimoff was standing alone in front of the crease like it was target practice.

Gophers forward Rem Pitlick responded after St. Lawrence scored on the power play with 4:29 left in the first period. His goal, from Brent Gates Jr. and Sammy Walker tied the game 1-1 with 2:34 to play in the first.

The two teams will meet again Saturday at 8:00 p.m. back at 3M Arena at Mariucci.

“We’re still learning each other and how it goes,” Motzko said. “The one thing … I’m not going to get frustrated. This is real different for me, and we have to battle through it.”