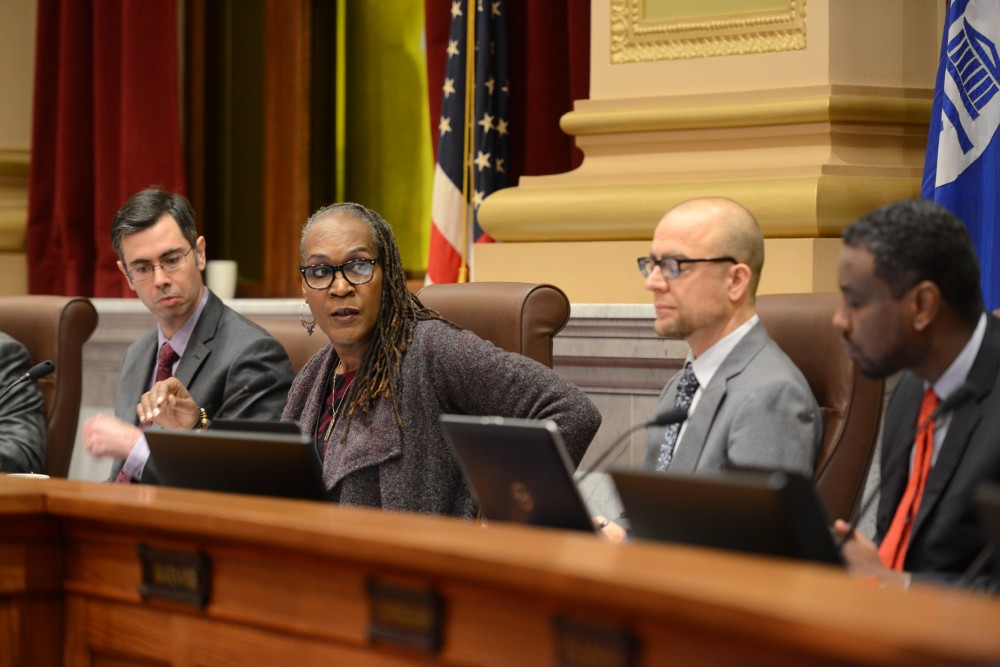 She hopes to use her experience in public policy and as a University of Minnesota oral historian to serve her Ward 8 constituents. Jenkins was inaugurated as a first-term council member on Jan. 8, where she was also announced as the body’s vice president.

“She is a remarkable leader. It’s a huge accomplishment to be vice president as a first-time council member, and I think the position is incredibly well-deserved,” said Ward 4 City Council Member Phillipe Cunningham, who serves as Jenkins’ vice chair on the Committee of the Whole. Cunningham became one of the first openly transgender men elected to public office in November. Prior to her election, Jenkins served as a policy aide to former Ward 8 council members Robert Lilligren and Elizabeth Glidden. Cunningham said he believes the relationships built by Jenkins during her time in the ward and her prominence in the community will serve her well in the new position.

“Hopefully with someone being as trusted and as connected as Andrea is, that will translate to an increase [in] trust and also engagement with local governing,” he said.

Jenkins previously served as oral historian for the University of Minnesota’s Transgender Oral History Project, where she interviewed 200 transgender and gender nonconforming individuals from the upper Midwest and helped document their stories.

The stories were compiled to form the Tretter Transgender Oral History Project Online Exhibition, a part of the University of Minnesota Libraries’ Jean-Nickolaus Tretter Collection in GLBT Studies. The entire archive contains around 250 hours of footage.

Cunningham was one individual who took part in the project.

“I was excited to be a part of [the project] because I have a somewhat unique experience being black, queer and trans,” he said. “It’s important for people to know that folks like me exist.” Though Jenkins departed the project after her election, she sees the experience as something she can bring with her to the council.

Among Jenkins’ biggest concerns at the beginning of her term are what she calls “bread and butter issues,” which include economic development, affordable housing and public safety.

“[The project] was very recently downgraded to a second-tier priority, meaning it is not up for funding in 2018,” she said. “And we are going to be fighting very hard to reinstate that project and get that back in the prioritization project so that we can begin work on the D Line to begin moving low-income and people of color back and forth from jobs.”

Lisa Vecoli, curator of the Tretter Collection, said the election of Jenkins and Cunningham to the city council shows Minnesota’s leadership in LGBT inclusion and equality.

“That has happened in the past, and it continues to happen today, as evidenced by the election of Phillipe Cunningham and Andrea Jenkins to the Minneapolis City Council as the first African American trans elected officials in the country,” Vecoli said.

Cunningham said Jenkins’ public service background will help her tackle issues in her ward and across the city.

“She has put in a lot of work to be a powerful leader in our city, not just for the trans community, but really our entire city,” Cunningham said.