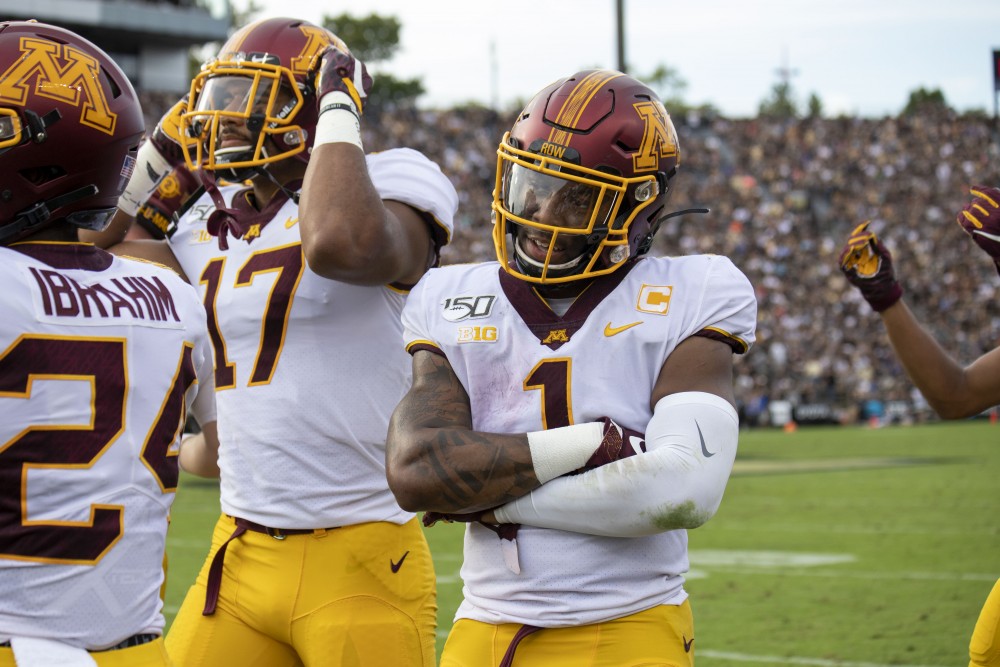 Running back Rodney Smith celebrates a successful play at Ross-Ade Stadium on Saturday, Sept. 28, 2019. The Gophers earned a 38-31 victory over Purdue.

In a sloppy performance, Rutgers gave the Gophers’ offense every opportunity to capitalize off of its mistakes.

With sixth ranked Wisconsin losing to lowly Illinois right before the game, the Gophers knew they need to maintain focus to avoid being upset by Rutgers.

“Anybody can lose any given day,” said senior safety Antoine Winfield Jr. “We just got to bring our game every single time.”

The game followed a familiar formula. The Gophers’ offense got off to a slow start and their defense completely shut down the opposing offense to give quarterback Tanner Morgan and crew chances to take control of the game. In the end, the Gophers took the win 42-7.

The Gophers’ offense sputtered to start the game. In the first half, Rutgers threw two interceptions and had a botched double-pass play that resulted in a fumble for a big loss, which eventually forced them to punt. The Gophers offense started off with great field position on almost every drive, yet they didn’t capitalize off of it until near the end of the first quarter when running back Rodney Smith punched in a 3-yard rushing touchdown.

“We started out a little slow,” said Smith. “We as running backs take pride in setting the tone.”

As the passing game struggled against a defense that ranked 118th out of 130 teams in the country with 36 points allowed per game, the offense had to rely on Smith, who finished the half averaging 5.8 yards per carry on 12 rushing attempts for 70 yards.

The passing game looked off all day. Morgan came into the game with the 16th best completion percentage in the country, completing 69.4% of his passes. In the first half, however, he was nowhere near that mark. Heading into halftime, Morgan was 10 for 22 in passing attempts and missed several wide-open receivers.

“It starts with me in the first half,” said Morgan. “There was a lot of inaccurate throws, so I got to get better with that.”

Despite his struggles, Morgan found star receiver sophomore Rashod Bateman for a 13-yard touchdown to give the Gophers a 14-0 lead with under five minutes remaining in the second quarter. The touchdown came after Morgan missed a wide-open Rodney Smith in the end zone on first down and a wide-open Bateman on second down.

A missed Michael Lantz field goal would keep the score that way heading into the half.

Whatever was said at halftime, it got the Minnesota offense back on track. On the first possession after the break, the Gophers drove the ball 72 yards down the field and scored on Smith’s second rushing touchdown of the day, a 16-yard run into the end zone.

The Minnesota defense was expected to have a good game; Rutgers scores the least amount of points per game in the country. Third-string quarterback Johnny Langan was starting for the Scarlet Knights and their best rusher, Raheem Blackshear, was out for the game after deciding to redshirt this season instead of play. Minnesota would seal the deal on Winfield Jr.’s second interception of the day, a 33-yard interception for a touchdown to extend the lead to 35 points.

Minnesota would show no mercy to the Scarlet Knights however. After a quick three-and-out by Rutgers on the ensuing possession, Morgan found senior wide receiver Tyler Johnson wide open for a 56-yard touchdown pass on the first play of the drive to give the Gophers a 42-0 lead.

Morgan knows that he just needs to give his play-makers opportunities to make plays.

“It makes my job very easy,” Morgan said about the amount of talent at the skill positions around him on offense. “They just want a chance. More often then not, they’re going to make the play.”

Rutgers scored its only touchdown of the game off a five-yard rush from Kay’Ron Adams to make the score 42-7.

Despite not getting the shutout, the Gophers defense has now allowed only 17 points in the last three games, all against Big Ten teams, and the Gophers now move to 7-0 on the season.

The Gophers look remain undefeated next week against Maryland, then they have a bye week before a big game against a top-15 ranked Penn State team.