Gophers fall to Iowa on homecoming 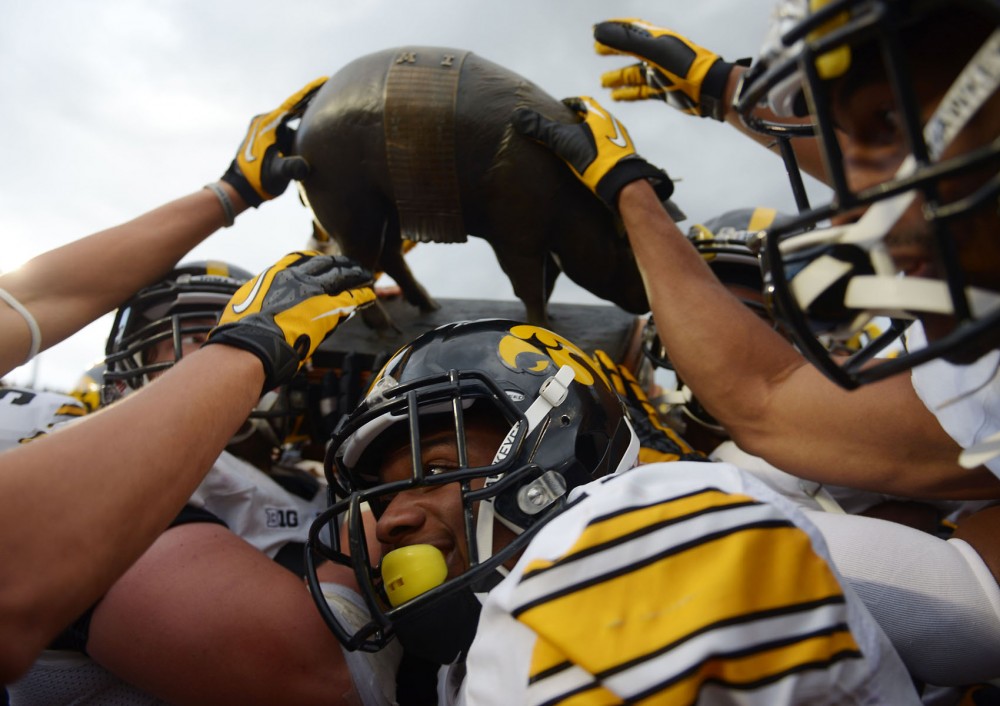 A group of Hawkeye players hold up the Floyd of Rosedale after their 23-7 win over the Gophers on Saturday afternoon at TCF Bank Stadium.

The Hawkeyes (4-1, 1-0 Big Ten) will keep the Floyd of Rosedale in Iowa City, Iowa, for the second year in a row with the win.

“They outcoached us [and] outplayed us,” Gophers head coach Jerry Kill said after the game. “It’s as simple as that.”

Minnesota sophomore quarterback Philip Nelson got the start Saturday in his first on-field action since injuring his hamstring against Western Illinois University on Sept. 14.

Nelson was inconsistent and finished 12-for-24 for 135 yards with a touchdown and two interceptions. He seemed uncomfortable in the pocket at times and took several key sacks. He also missed a chance with his team trailing in the fourth quarter to complete a deep pass to redshirt senior Derrick Engel that might have shifted momentum.

It was widely speculated that Nelson wouldn’t start Saturday, especially after redshirt freshman Mitch Leidner rushed for four touchdowns in Minnesota’s win over San Jose State University the week before.

Still, Kill had said all week the position was Nelson’s, as long as he felt he was healthy enough.

“We talked to him a little bit last night, and we talked to him before the game,” Kill said at his postgame press conference. “He felt that he was 100 percent and that he’d be able to go.”

Minnesota was 4-0 going into the game, as it was before last year’s Iowa game. And this year’s team had played better leading into the rivalry game and had the luxury of playing Iowa at home.

Iowa took a 17-0 lead into halftime after two second-quarter touchdowns. The first — a four-yard run by quarterback Jake Rudock — came at the end of a methodical 80-yard drive. The second score sucked the life out of the stadium as Damond Powell caught a screen pass and took it 74 yards to the house.

The Hawkeyes’ offense didn’t make many big plays after that, but it didn’t need to. It controlled the ball for much of the game and kept the Gophers’ offense off the field for more than two-thirds of the second half.

Iowa junior running back Mark Weisman led the team with 147 rushing yards — almost 100 of them in the second half.

The Hawkeyes’ defense matched the energy of Weisman and the offense. It physically dominated Minnesota up front and forced it to throw more than usual. The Gophers were forced into many third-and-long situations, and they struggled to sustain any meaningful drives.

Nelson’s lone touchdown pass came in the third quarter and pulled the Gophers within 13 points. The touchdown pass to Engel came three plays after junior Marcus Jones returned a kickoff 66 yards to give his team good field position.

Minnesota didn’t get into Iowa territory after that. Nelson completed just three passes in the fourth quarter and threw an interception that sealed a victory for Iowa.

The Gophers’ schedule doesn’t get any easier. They travel to No. 19 Michigan next week before playing No. 16 Northwestern on Oct. 19.

“It hurts,” senior safety Brock Vereen said after the game. “It’s supposed to hurt, but … if we expect to go into Michigan [next week] and get a win there, it’s going to take complete focus starting [Sunday].”