Yes, cassette tapes may be impractical, but in Minneapolis people are keeping them alive

The prospect of enjoying music on tape begs many questions; listeners have answers. 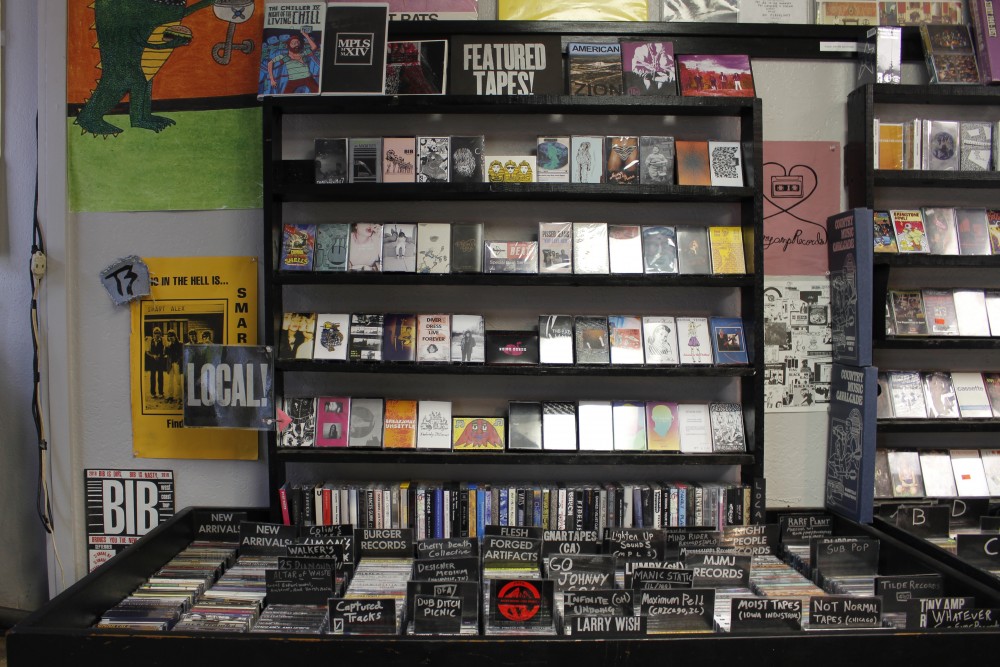 Cassettes line the shelves of Dead Media in on East 25th Street in Minneapolis on Wednesday, Apr. 26, 2017. Dead Media sells a variety of old books, vinyl records and other outdated media recorded on older platforms, including many cassettes recorded by local artists.

Cassette tapes are impractical, and the people who buy and produce them agree. Yet, a community of listeners continue to keep them alive.

“It’s ridiculous buying cassettes and having a cassette player,” said Jordan Bleau of No Problem Records, a local cassette label. “It’s impractical in the most basic sense. But … I don’t know, if you can get down on a level of wanting to have a more personal experience and wanting to have an object, then tight.”

While many order their cassettes online, Dead Media, a book, record and tape store in Minneapolis’ Seward neighborhood, is one source for tapes in the Twin Cities.

“No store in this town has a tape selection like this,” store co-owner Colin Wilkinson said. “No one. There’s a need for it and a void in the whole area.”

So, why do people buy tapes?

Wilkinson isn’t really sure. Thanks to labels like Burger Records and Gnar Tapes, a subculture started to emerge in the early 2000s.

Here in Minneapolis, Bleau and Alex Uhrich started No Problem Records in 2014. When it comes to music, they produce “whatever man” and have developed into a label for many new bands’ first release.

Does the music sound better on tape?

“Technically it’s worse, but sometimes it’s better,” Wilkinson said. “Hip-hop on cassette sounds rad. You get the analog sound, the rustic too and the warmth. On a tape, you get that little, shitty quality to it. It’s a little compressed, a little dirty and it just sounds dope.”

How do people get into cassettes?

“People used to just go to shows,” Bleau said. “Going to a local show and seeing a local band in a basement and getting blown away — if a band is doing that type of show they are probably releasing stuff on tape. A lot of people that buy tapes are in a band and have a tape out, run a label or a tape store, stuff like that.”

Why would a band produce a tape in the first place?

In a word: economics. According to Bleau, it only costs a few dollars to produce a cassette. Cassette production provides access for bands who may not have the resources or time to produce in other ways. It’s a “DIY” style of production.

Tapes also add a physical value to the music that’s on them.

“It’s like, ‘Yeah, there is value to this,’” Bleau said. “By going through the process of producing a physical thing, you’re assigning value to that. This is a real thing.”

Since they’re cheap to produce, there’s really no money in it for anyone. But Bleau said that’s alright — it’s a labor of love.

“It’s that finding something that feels super personal to you, and like secret or something,” he said. “That’s really cool, and really not the case with how music is typically released these days.”

In fact, cassette culture is almost the opposite of mainstream music consumption, and Bleau said that rejection is part of the appeal. However, the mainstream culture is starting to bleed into the cassette world.

Bleau said the simple answer is yes, of course. But he thinks that has the potential to co-opt the subculture and exploit it.

The majority of tapes at Dead Media and online are either vintage or new from bands who want tape releases. However, next to Grateful Dead bootlegs and No Problem’s artists, there are cassettes from The Shins, Fleet Foxes and Kanye West.

“At some point that bubble will burst — hopefully — and just be back to weirdos,” Bleau said.

So why are tapes still alive?

It’s the combination of many little pieces that make cassettes what they are: the sound, the physical object, the accessibility, the secrecy, the community. While they may be impractical, the tapes themselves keep people pressing play.

“That’s really it, that is what it comes down to,” Bleau said. “Honestly we all do this because we love it, and that’s the only reason to do it.”