An International Kickboxing Federation world champion brings his skills back to campus. 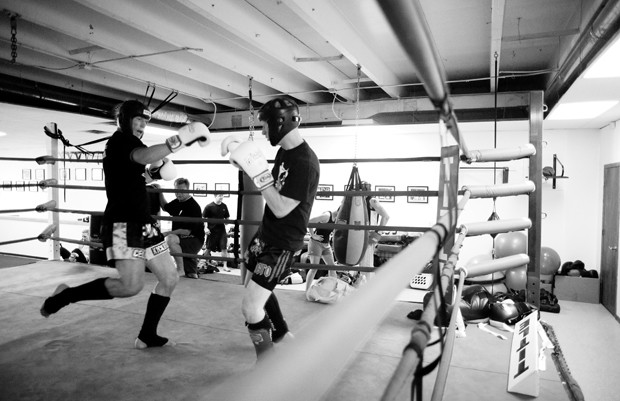 Cellar Kickboxing owners and brothers, Christopher, left, and Jon Cichon spar during a practice on Monday. The Center is moving locations near the University in the fall.

Cellar Kickboxing and Martial Arts will move back to campus this fall with more space and hopes of attracting University of Minnesota students. The Cellar, which is going to be renamed The Cellar Fight and Fitness because of changes made to the programs, will be located on 2715 4th St. SE. International Kickboxing Federation world champion Chris Cichon is the owner and chief instructor at the gym, as well as an alumnus of the University. The Cellar is looking to attract primarily University students with martial arts programs in kickboxing, mixed martial arts, boxing, muay thai, fitness and jiu jitsu , Cichon said. The gym aims to help students become competitive in kickboxing and mixed martial arts and also provide a range of fitness and exercise classes that help non-fighters stay in shape. Cellar Kickboxing and Martial Arts was previously housed in the basement of Joe’s Market and Deli on Como Avenue Southeast, but moved nearly four years ago to New Brighton for more space. The location on 4th Street is 6,200 square feet, three times the size of the current building. The new location has a full size boxing ring and two separate training floors, which will allow them to hold multiple classes simultaneously. The Cellar will have a grand opening Sept. 12, from 9 a.m. to 4 p.m. More than 500 college students have been invited to participate in the event. Cichon said he doesnâÄôt think there are many places around campus that offer similar programs to The Cellar. Griffin Martial Arts & KickBoxing , located in South Minneapolis, does not expect to compete with The Cellar for business. Owner Keith Griffin said he offers classes that place a greater emphasis on fitness, not competition. âÄúI donâÄôt see it as a threat,âÄù Griffin said. âÄúKickboxing promotes awareness, if they bring it here, it is also good for us.âÄù Kinesiology senior Aurora Palmer said she has been attending The Cellar since 2007 and took a kickboxing class, among others. Palmer said she is happy to see The Cellar return to campus. âÄúAs a college student it is a little bit easier for commuting purposes,âÄù she said. Nick Riley , 19, trains in kickboxing at The Cellar and won a championship belt in 2007, outclassing three opponents with no previous experience in the fighting ring. Riley, who is 3-0, said he is scheduled to fight an Alaskan kickboxer who has never fought before on Aug. 22. Riley has four years of training experience and said he spends about ten hours a week preparing for the fight. Cichon said while he hasnâÄôt finalized a membership price for the new campus location, monthly fees to belong to The Cellar will be under $100 per month.