The Gophers were victorious in the triple dual meet over the weekend. 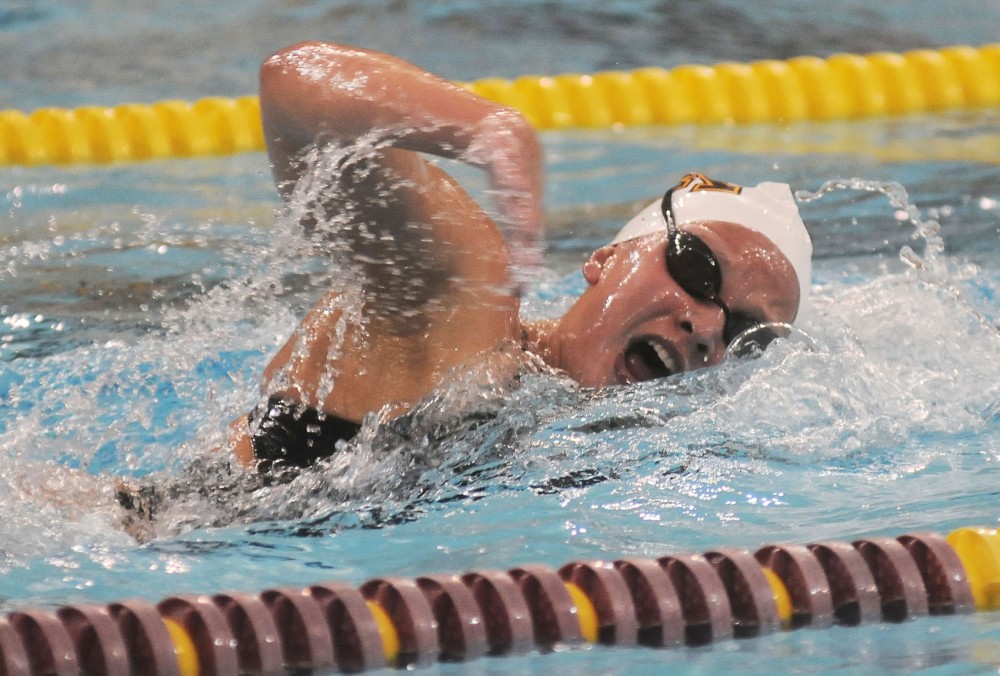 Brook Zieger swims the 1,000-yard freestyle for the Gophers at the University Aquatic Center on Friday, January 30th.

When a team has an Olympic-caliber swimmer, finishing the regular season strong is not a problem.

Under the guidance of junior standout Kierra Smith, the No. 19 Gophers defeated Northwestern and Purdue with a score of 259-88 and 232.5-116.5, respectively.

She said she wanted to fine-tune her technique before the Big Ten championships later this month.

“I’m trying to get my details right,” Smith said. “I focused a lot on my turns and my underwater pull-outs and trying to lengthen those out.  And then I focused on being streamlined off the blocks.”

Assistant coach Steve Miller said Smith is one of the best in the world in her events.

“You can always rely on [Smith],” Miller said. “I know that our focus is still on the big picture and really trying to move our team towards the [championship season], but having someone on your team who is a world-class athlete helps you get to that level.”

Turner steps up for men

He also took second in the 50-yard freestyle.

Turner said he felt great about some of his races, but there were a few things that he thought needed some fixing.

“I need to work on the break-outs for my breaststroke,” Turner said. “Also just carrying my speed out of the water. That is one thing. And [one more thing] is breath control for the 50-[yard freestyle]. I don’t get many chances to swim the 50, so I just need to go back to practice and hone in on that.”

In men’s diving, sophomore Matt Barnard took third in both the 3-meter board and the platform.

Miller said he’s proud of his team for coming back to win the triple meet after losing at North Carolina State last weekend.

“It’s tough to lose at any point, but it speaks volumes of our athletes that they were able to refocus and really to come out and compete against some good teams in the Big Ten,” Miller said. “We’re happy, and we feel good with where we are at, but there are still things that we still need to work on [before the Big Ten championships].”