Minnesota took down the Spartans in four sets. 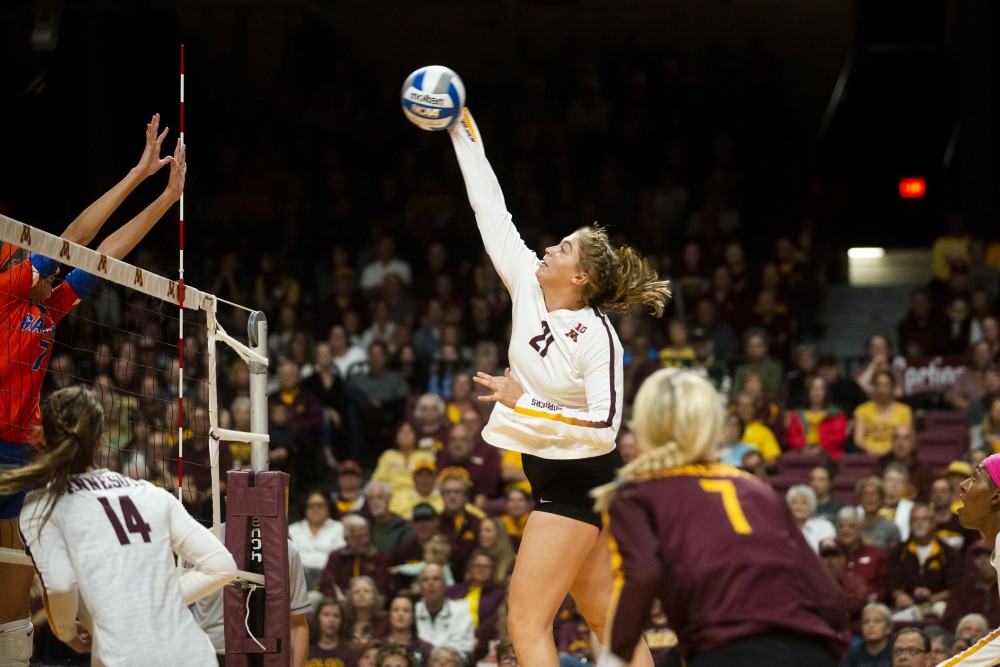 Middle Blocker Regan Pittman spikes the ball at the Maturi Pavilion on Saturday, Sept. 7. The Gophers defeated Florida 3 sets to 0 for their home opener.

After defeating Michigan in Ann Arbor on Friday, the Gophers volleyball team didn’t have to travel far to pick up their fourth straight win Sunday at Michigan State.

The Gophers won in four sets: 25-21, 25-20, 26-28 and 25-18, and they were ready right from the jump. Minnesota took an early 5-1 lead, prompting a quick Michigan State timeout. The timeout failed to stall the Gophers’ momentum — their lead only grew. A kill by middle blocker Regan Pittman extended the lead to seven, and their lead grew to 12 when a kill from opposite hitter Stephanie Samedy put Minnesota up 17-5. Michigan State was able to slowly close the gap, coming within three as the Gophers reached set point, but Pittman added another kill to take the set.

“I think it was really important to start as strong as we could. We know Michigan State is a physical team, and they can certainly get it going,” head coach Hugh McCutcheon said. “So if we didn’t set the tone early, who knows? I like the way we started, and even though it was hard all the way through, I thought our athletes really battled well.”

Michigan State continued to tighten the reigns in the second. They led 5-3 early, but Pittman tied it with a kill and an ace. Michigan State and Minnesota continued to trade points and Michigan State took a late 20-19 lead. To close out the set, the Gophers went on a 6-0 run that included a pair of blocks and kills from outside hitter Alexis Hart and middle blocker Shea Rubright.

Looking to avoid the sweep, Michigan State came out firing in the third, opening the set on a 5-0 run. This time it was Minnesota who slowly closed the gap, and they did so from the service line. Libero CC McGraw had the first ace of the set for Minnesota, cutting Michigan State’s lead to four. Outside hitter Adanna Rollins added another to bring the Gophers within two and Samedy contributed one more to bring Minnesota within one. The Gophers tied it at 23, 24, 25 and 26 before Michigan State could finally get two in a row to avoid the Minnesota sweep.

The Gophers opened the fourth like they did the first, with a run. They opened on a 7-2 run after another Pittman kill. Their lead grew up to 10 after back-to-back aces from McGraw. Michigan State went on one last run, coming within three late, but the Gophers scored four in a row and Pittman closed out the match with an ace. The Gophers had 11 on the match.

Pittman finished the match with a career-high 19 kills. She also added five blocks and three aces.

“I was really just in a groove, and I had a lot of teammates who were doing a great job of passing and serving as well,” she said. “Bayley McMenimen really set the ball good on the side, and I think it just all kind of flowed and we kept going.”

Minnesota earned two important victories this weekend as they look to keep pace in a stacked Big Ten Conference. The Gophers are 9-1 in the Big Ten at the midway point in conference season.

“It’s huge. Home court is a big advantage for every team in this league, and to be able to get a couple against two quality opponents on the road, that’s a nice accomplishment for us,” McCutcheon said. “A good way to finish up the first half of the league.”

The second half of conference play will begin for the Gophers Wednesday when they take on Ohio State at Maturi Pavilion.