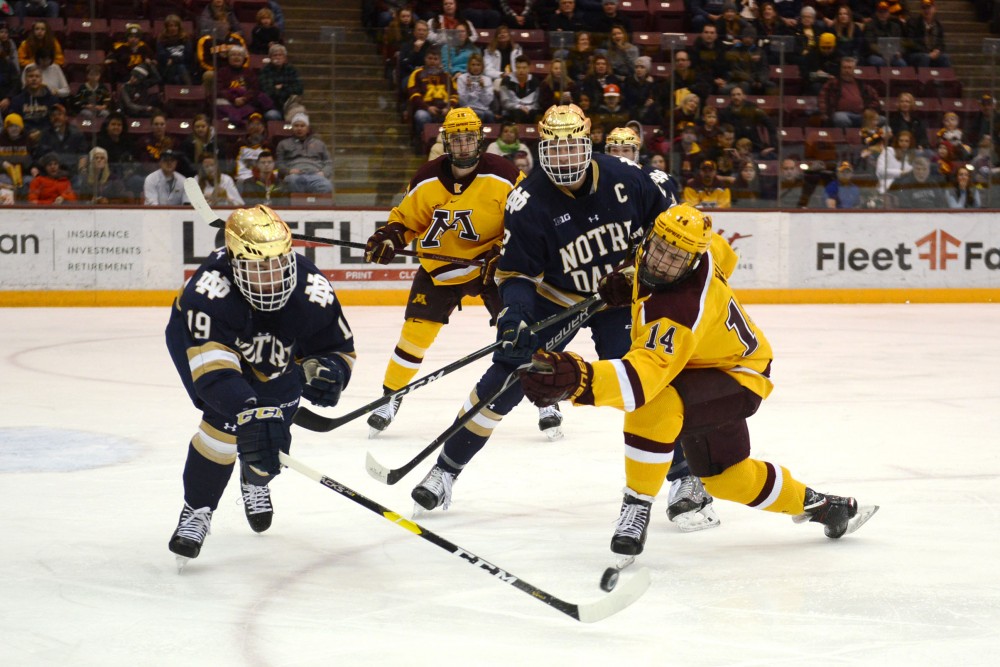 Freshman Garrett Wait stretches out to grab the puck on Saturday, Feb. 23 at Mariucci Arena. The Gophers beat Notre Dame 2-1.

Playing in their final conference game of the season, the Gophers were in desperate need of a victory.

“It was a hard-fought hockey game,” said head coach Bob Motzko.”We scored two goals on the down-low play, we had an attack tonight. [Junior goaltender Mat Robson] was strong when we needed him. We needed a bounce-back night and we got it.”

Just like the series-opening defeat on Friday night, Minnesota got off to a strong start. Junior Tyler Nanne put the Gophers in front with a first-period goal off a nice feed from junior Rem Pitlick.

“[Pitlick] likes to find me in the slot,” Nanne said. “I passed to him yesterday and it didn’t connect. We made sure it connected tonight.”

Momentum shifted after senior Tyler Sheehy took a penalty for interference with 8:18 remaining in the first period. Though Notre Dame didn’t score, it controlled the run of play until the first intermission.

The Fighting Irish continued to put pressure on Minnesota in the early stages of the second period, culminating in an equalizing goal just under five minutes in.

The score remained tied for less than five minutes before sophomore Scott Reedy beat the Notre Dame goaltender, junior Cale Morris, top-shelf to give the Gophers a 2-1 advantage. On the play, the Gophers battled on the forecheck and freshman Garrett Wait found Reedy, who made the most of his second chance.

“I saw one of our guys in there battling for the puck,” Wait said. “Then I saw [Notre Dame] had pinned it against the wall, so I pinned him against the wall trying to steal the puck from under his skate. I saw Reedy open in the slot and I found him.”

The difference remained a single goal throughout the rest of the game. Things got so tense within the early stages of the third period, though, that one particular body check on Gophers forward Brannon McManus shattered the glass in front of the penalty box.