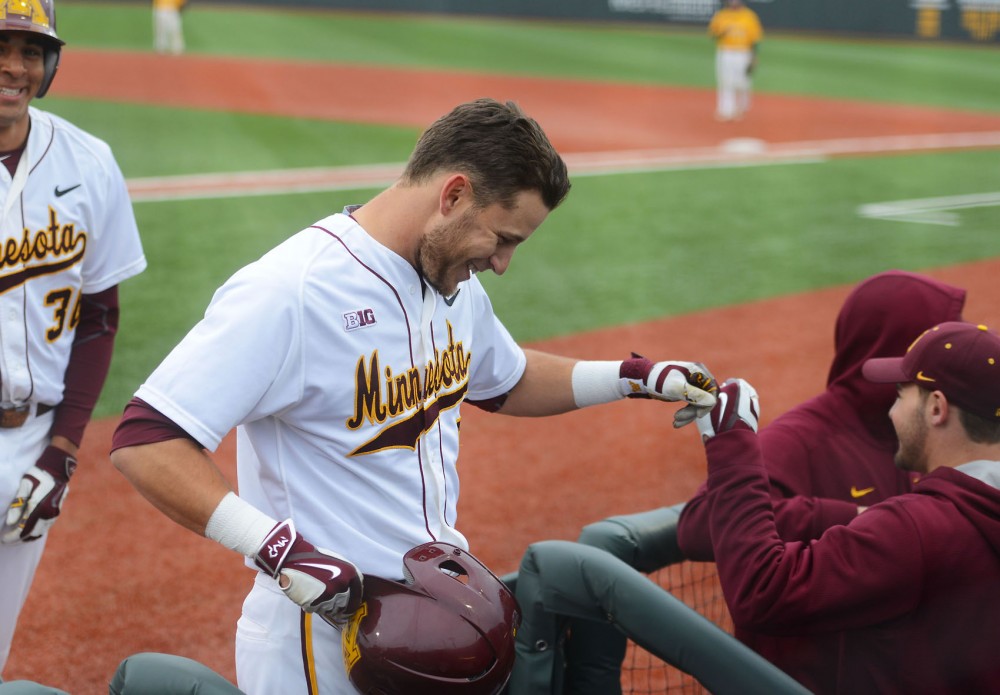 Redshirt senior Michael Handel celebrates with teammates after hitting a home run at Siebert Field on Wednesday afternoon against the Carleton College Knights.

Before his team took the field Wednesday evening, head coach John Anderson told the Gophers they needed a clean game. The team delivered, throwing its second shutout of the season while recording no errors in an 11-0 victory. âÄúIt was a crisper game,âÄù Anderson said. âÄúI thought we attacked the strike zone and did a better job with our breaking ball tonight.âÄù Hits came in bunches early against a Carleton squad that could not slow down its Division I opponent. Within three innings, the Gophers (11-17) had a double-digit lead. The floodgates opened in the bottom of the second inning for the Gophers when redshirt senior Michael Handel hit a ball over the left-field fence for the first run of the game. The Gophers added on a single and two doubles before the inning was over, building a quick 4-0 lead. They didnâÄôt cool off at all before their next trip to the plate, scoring six in the bottom of the third to take a 10-0 lead. The Gophers took 10 trips to plate before their three outs were up, with sophomore Matt Fiedler starting and ending the inning. The inningâÄôs highlight came from redshirt sophomore Jordan Smith, who hit a blast that barely curved fair over the right field fence for a three-run home run. âÄúI was watching it for a bit,âÄù Smith said. âÄúI thought it was going to go foul there for a second, but it stayed fair.âÄù On the mound, the Gophers started young pitchers but still threw their way to a shutout. MinnesotaâÄôs first four pitchers on the mound âÄî Reggie Meyer, Lucas Gilbreath, Jeff Fasching and Fred Manke âÄî were all freshmen with ERAs greater than seven in limited action this season. The rookies have struggled with command in their first season, but Wednesday they controlled the strike zone and gave up only one hit and two total baserunners in four innings. âÄúI think it just shows that if they trust their stuff, no matter who theyâÄôre playing, theyâÄôre going to be successful,âÄù Handel said. âÄúThey went out there with a lot of confidence and proved what theyâÄôre able to do.âÄù The Gophers turned to more experienced pitchers from there, giving up only three hits total in the game. Anderson attempted to get as many players into the game as possible, substituting his position players from the fourth inning onward. âÄú[We] got everybody a chance to play in the game tonight, and thatâÄôs always helpful,âÄù Anderson said. âÄúSome of the kids that havenâÄôt played much got an opportunity.âÄù Sixteen players hit for the Gophers, and nine different pitchers saw the mound. And with all their combined efforts, Minnesota finished with its largest margin of victory this season. âÄúMidweek games are all about getting confidence and getting innings in for guys who donâÄôt get a lot of playing time,âÄù Smith said. âÄúI think that we played pretty well, and the freshmen stepped up today.âÄù