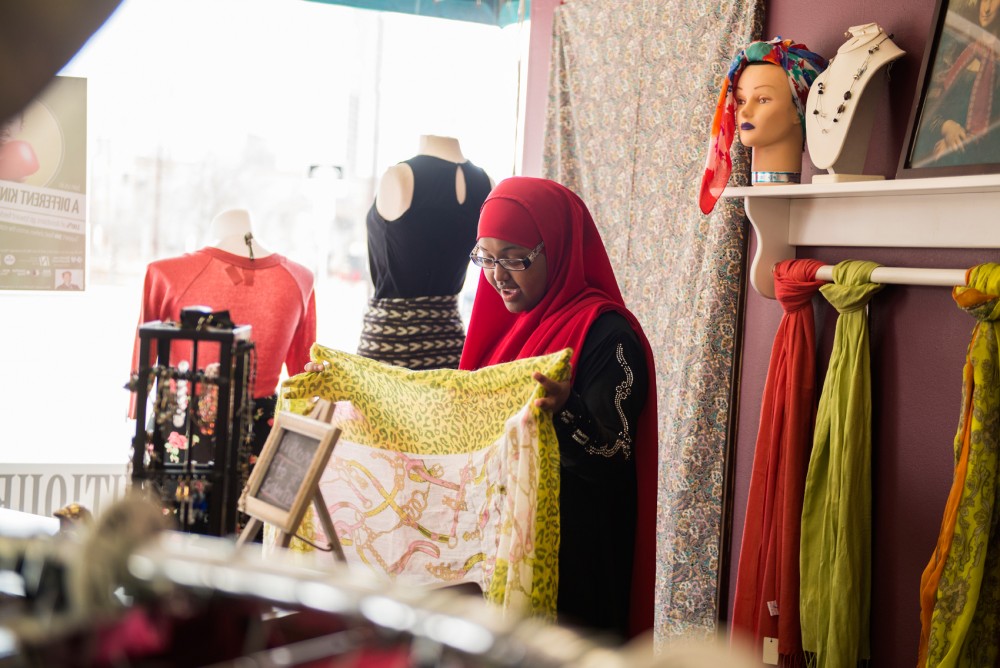 Fatuma Mohammed speaks to a customer at Sisterhood Boutique on West Bank on Monday. The store was created by East African women in the Cedar-Riverside neighborhood in an effort to provide girls ages 14-21 with work experience through an intern program, which Mohammed was a part of before becoming an employee.

Olivia Johnson
Since its opening two years ago, a small shop on Riverside Avenue showcasing colorful hand-me-down clothing has given young women the tools they need to thrive in the workforce.
Sisterhood Boutique, which celebrated its second anniversary last month, allows women ages 16-21 to take part in a four-month internship to help build and develop their business skills.
Yasameen Sajady is the social enterprise manager at Pillsbury United Communities, which owns the store and oversees the internship program as the business grows.
“With these youth social enterprises, they’re very complicated and multilayered,” said Sajady, a 2011 Augsburg College business marketing alumna. “There’s a lot of things you have to take into consideration.”
She said she has worked to bring the internship and business aspects of the shop closer together to make the program both sustainable and educational.
Sisterhood is finishing up with its eighth group of interns and has started training the ninth, with each group consisting of 10-12 young women, she said.
Since she was hired in 2013, Sajady made additional changes to the program, like helping interns prepare for college and understand personal finance.
Sajady said she started a financial literacy program in January to help teach the women how to make the most of their earnings.
More than 100 women have participated in the four-month program since it began, she said, adding that they work with about 40 each year.
“In the first two weeks, we really hit hard on the skills that you would need to be successful,” said Sajady. “And then they’re put on the job.”
During the rest of the internship, Sisterhood employees build on the skills they learn in workshops, like interviewing and resume-building, said Sajady.
“We’re trying to build the capacity of a few youth that have come through that have shown that they want to be a part of it,” she said.
To keep the shop running and to train in more interns, Sisterhood hired Khadra Fiqi, a sophomore at Metropolitan State University, after she helped start the boutique program.
In her junior year of high school, Fiqi said she and friends from Cedar-Riverside came up with the idea after they discussed opportunity disparities and needs they noticed in their East African community.
“There’s a need for a program like Sisterhood,” she said. “There’s a need for a program where youth leadership is visible, where youth give back to the community, where youth get opportunities to connect with different resources.”
Although the initial group didn’t have the resources or the knowledge to execute their idea, Fiqi said they approached the Brian Coyle Center, which began to work with them on the program.
“There was … an urge to just do something,” she said. “The girls had excitement and enthusiasm for entrepreneurship.”
The program requires the interns to take two weeks of in-class training on business models, social media, public speaking and mock interviews.
Fiqi said many women sign up for the program and are chosen by age, work availability and whether they live in the neighborhood.
Amano Dube, director for the Brian Coyle Center, said the group of young women came to him in 2013 to help start their secondhand clothing store.
“What makes it special is … this is just developed by East African young women who don’t have opportunities like this,” said Dube. “It came from their own internal
willingness.”
Delete Image
Align Left
Align Center
Align Right
Align Left
Align Center
Delete Heading