The Foundation for Minnesota Baseball purchased lights for the new stadium. 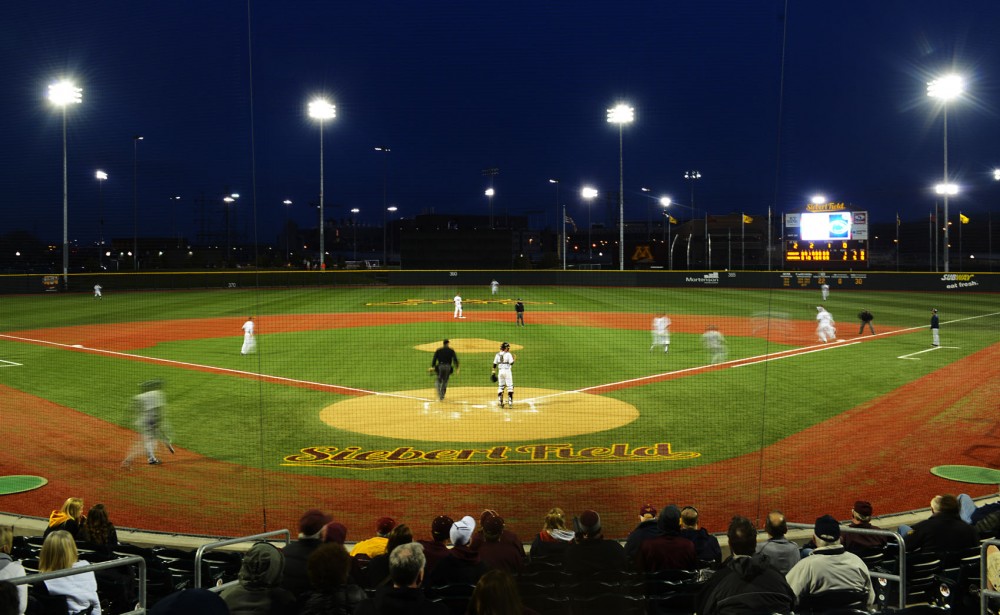 Lights illuminate new Siebert Field for the first time in the stadium's history on Friday.

The University of Minnesota’s new Siebert Field, which opened last year, lit up the sky for the first time in the stadium’s history Friday night as the Gophers baseball team took on Penn State.

The Foundation for Minnesota Baseball, headed by Chairman Dr. Dan Courneya, raised $500,000 for the stadium’s new lights. Courneya and several others were honored before Friday’s game.

“Siebert Field and the University’s baseball program, to us, is the focal point of amateur baseball for Minnesota,” Courneya said. “It only seemed right for our foundation to step forward to make this possible.”

Sid Hartman, a celebrated journalist in the Twin Cities, flipped the lights’ switch at about 6:30 p.m. before the sun set. Just after 8 p.m., the sun finally dipped below the horizon to illuminate the true impact of the lights.

“It’s something that we all dream about,” he said after the Gophers’ 2-1 win over Penn State. “And fortunately, coming out with a win in the first one is always nice.”

Robert Ballintine, the foundation’s executive director, said the funding for the lights came from several anonymous donors, adding that the foundation purchased the lights from Musco Lighting.

The lighting installation comes two years after the team opened the $7.2 million stadium. The Gophers are also hoping to add several more features during “Phase II” of the renovation, which does not have a set timeframe. Those features include an indoor training facility, home and visitor locker rooms, offices, an umpires’ locker room and a canopy.

“I think the lighting system goes along with what we said from day one,” he said. “We want a quality facility where we can play a quality baseball game.”

A call for help

Courneya said he was driving between hospitals about a year ago when he heard Hartman talking on the radio about the Gophers baseball team’s need for lights.

He brought up the idea of donating them to the foundation’s board and said it was pretty easy to convince them to support the project.

“It was Sid’s continued pleading, but all it took was 60 seconds to see that John Anderson was one of the best coaches that the University’s ever had,” Ballintine said. “It was just wrong for Siebert not to have lights.”

Ballintine said the foundation purchased the lights at the end of 2013. Musco installed them throughout the winter, despite the harsh weather.

“They were putting these light poles up on the coldest days in February and March,” Ballintine said, noting that crews had to stop six times because it was too cold to work.

Ballintine said the foundation is continuing to study the needs of the baseball program and Siebert Field in the hopes of helping the University finish the total project.

“We just want to see it finished,” he said. “It’s only about halfway done.”