The junior has the third-most assists on the team with 13 in 12 games so far. 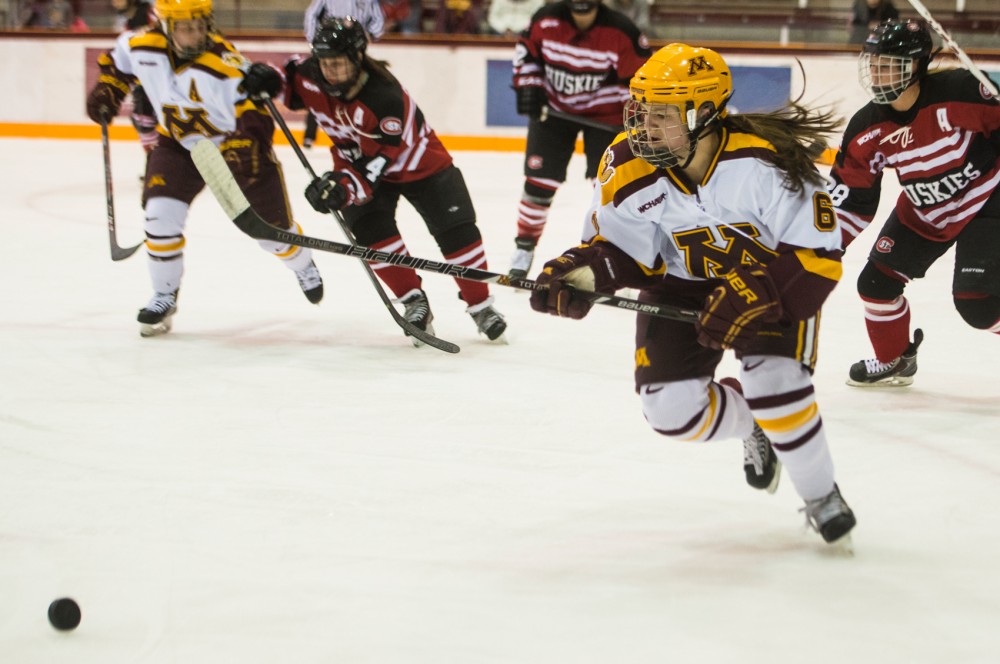 Gophers forward Kate Schipper chases down the puck during the second period against St. Cloud State on Feb. 28, 2014.

Emily Polglaze
Kate Schipper may be the Gophers’ shortest player at 5 feet, 4 inches, but she has no trouble making her presence known on the ice.
Schipper has five goals and 13 assists in her junior season and is working to develop a role for herself on the team.
“Every game, and every practice, honestly, Kate is not only looking to become better, but she’s shown it on the ice,” associate head coach Joel Johnson said. “She’s executing at a high level, and it’s really rewarding for her to see that on the score sheet as well.”
Schipper was a primary contributor for Breck School prior to her arrival at the University of Minnesota.
Schipper helped lead her high school team to the Class A State Tournament three times.
Schipper and Breck claimed a state title in 2012, along with current Minnesota defenseman Milica McMillen.
Schipper was also selected as a member of the United States Under-18 team in 2012 and 2013 and won silver medals both years at the International Ice Hockey Federation Championships.
She was named the best forward and most valuable player in the 2013 tournament.
Schipper then came to Minnesota, where she’s improved throughout her career.
She played in 39 of the team’s 41 games as a freshman and registered seven goals and 22 assists.
Schipper finished with seven goals and 15 assists last season as the Gophers collected another national championship.
Now she’s on pace to set new career highs halfway through her junior year.
Schipper has had points in all but three of the team’s games this season and said her line has had a lot to do with her success.
She skates on the team’s second line with sophomores Cara Piazza and Kelly Pannek, and the trio has a combined 58 points so far this season.
Schipper is the line’s distributor, leading the three in assists with 13.
“I’m more of a passer than a shooter, so just getting the puck to teammates who are open and in good scoring chances, I try to do that,” Schipper said.
Her speed also gives her an advantage, as she can move down the ice quickly to set up plays for her teammates.
Schipper said when she was younger she played with boys’ teams, which made her compete more and develop a quickness that has lasted throughout the years.
The Brooklyn Park, Minn.native tries to set an example for her line as its oldest member, and Pannek said she tries to follow along.
“She definitely brings a confidence to our line, and having one more year of experience is a huge advantage for her,” Pannek said. “I’ve known her for a long time, and it’s fun to see her grow into the player she [is] and to be able to play with her.”
Delete Image
Align Left
Align Center
Align Right
Align Left
Align Center
Delete Heading