Aftermath of Mogadishu attack felt across Minneapolis and University

Community members provide emotional and financial support for those impacted by the Oct. 14 bombing. 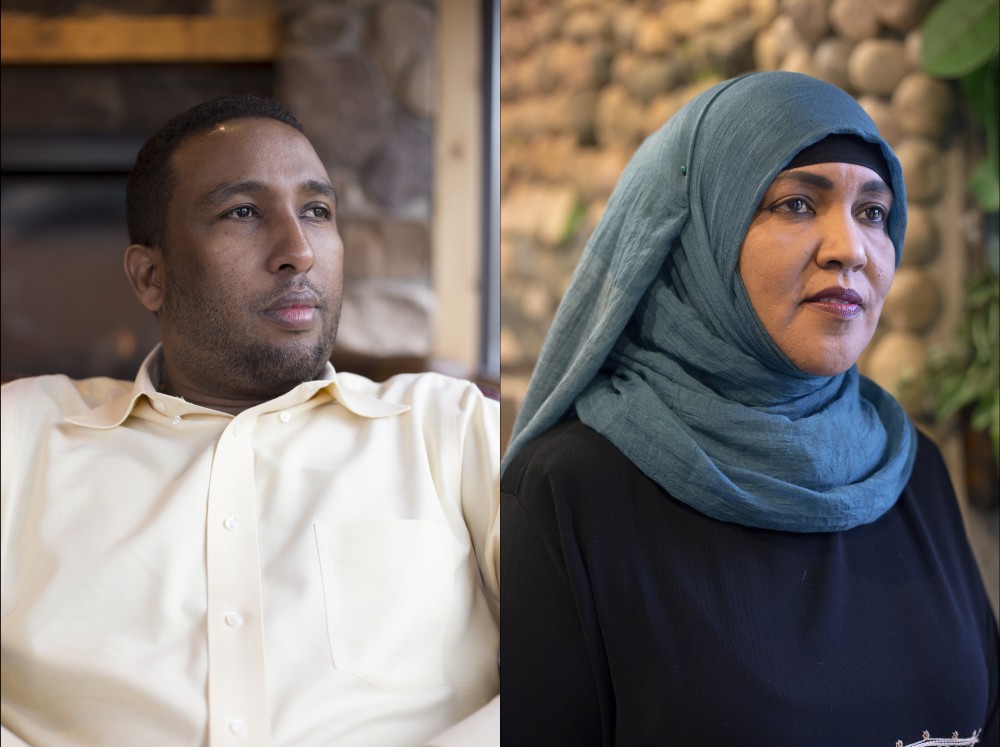 Diini Sabrie, left, and Amina Deble pose for portraits on Saturday, Oct. 21. Sabrie is grieving a close friend, Minnesota resident Ahmed AbdiKarin Eyow, who was killed in the recent bombing in Mogadishu, Somalia. Deble lost six friends in the bombing.

Diini Sabrie spoke to his longtime friend Ahmed AbdiKarin Eyow for the last time on Oct. 14.

The two exchanged messages that Saturday afternoon about Eyow’s trip to Mogadishu and what it felt like for him to be home again.

Six hours later, a truck armed with explosives drove into the center of Mogadishu, killing hundreds and leveling a nearby hotel and other buildings.

Sabrie, a Bloomington resident, immediately reached out to Eyow’s family and contacted friends in Somalia to learn his friend’s fate.

It took five hours to discover Eyow was killed in the blast.

“I was not expecting someone I communicated with less than six hours ago [to be gone],” Sabrie said. Sabrie has since struggled to accept his friend’s death, often daydreaming Eyow is still there.

Sabrie’s story is one of many repeated since the attack in Somalia’s capital city of Mogadishu — the country’s deadliest in decades. The University of Minnesota community and surrounding neighborhoods have grappled with the aftermath of the bombing, organizing community vigils and fundraisers in solidarity.

The deadly attack, which claimed more than 350 lives and injured hundreds more, is believed to be linked to Islamic terrorist group al-Shabab.

“This tragedy, regardless of if we lost relatives or not, has hit us pretty hard,” said Jaylani Hussein, executive director of the Minnesota chapter of the Council on American-Islamic Relations.

Many in the community, like Hussein, have experienced a “roller coaster of emotions” from sadness to worry for relatives in Mogadishu.

The community is also in disbelief over the scale of the attack, Hussein said.

“The fact that this is the worst known single-day attack on innocent lives in the history of Mogadishu sets this incident apart from any other past incident,” he said.

Ward 6 Minneapolis City Council Member Abdi Warsame said community conversations have focused on the “whys” — why it happened and why now, when Somalia was recovering from a civil war.

Warsame has consoled community members while coping with his own grief. He lost seven cousins in the attack.

“I did my day-to-day work, and just [had to] find my own space of healing,” Warsame said. “And it’s difficult. It’s really, really painful.”

Vigils and healing spaces were held in Cedar-Riverside and at the University throughout the week after the Mogadishu attacks.

More than 100 people gathered on Monday, Oct. 16 for a somber vigil in the Brian Coyle Center gymnasium. Those overcome with emotion were unable to finish speeches.

“We mourn for you today. We rebuild with you tomorrow,” Hodges said in a speech at the vigil.

Amano Dube, director of the Brian Coyle Center, said the center has doubled as a supportive space for those in shock.

Students shared concerns about the impact the attacks will have on Somali-American culture, while also acknowledging the need to grieve. Among the shock and sorrow many held, a theme of resilience was at the forefront of the conversation.

University alumna Safia Yasin Farah spoke to the group about handling loss and overcoming fear instilled by the attacks.

Yasin Farah lost a close friend she met while participating in the North American Somali Student Union during her time at the University.

“They shouldn’t shut you down because that’s what they’re trying to do, those who are doing the explosions,” Yasin Farah said. “Resilient is the perfect word [to] describe Somalis here in Minnesota and over there in Somalia.”

Community members have rallied support and fundraising dollars for those impacted by the bombing, and on Friday, many mosques across Minneapolis accepted donations for those affected.

The entirety of the fund will be sent to Somalia to help pay for funerals, medical supplies, sleeping kits and shelters for temporary stay, according to the GoFundMe webpage.

Fundraisers for individual families have also been established, including the family of Eyow. Diini Sabrie said he and other friends have pledged to financially support Eyow’s family.

“Ahmed is a guy I will remember [for] the rest of my life,” Sabrie said.

Though Sabrie and friends know they can’t replace Eyow as a father, they plan to support his children’s academic and extracurricular endeavors.

Surrounded by food each day, Deble has struggled to muster an appetite.

Living far from Somalia has been trying for Deble since the attack, as she wishes she could bury those she lost. Deble has instead turned her support to the families of her deceased friends.

Abdi Warsame said he has been “touched” by the community’s unity.

The Mogadishu attack will ultimately change how Somalis think of their home country, said Jaylani Hussein.

“There will always be [a] before and after this day, and we hope that this day will unite the community to fight evil in this world,” Hussein said.

Correction: A previous version of this article misattributed a quote. The quote was said by Betsy Hodges.