Former Gophers pitcher Glen Perkins has established himself as one of the top relievers in Major League Baseball. 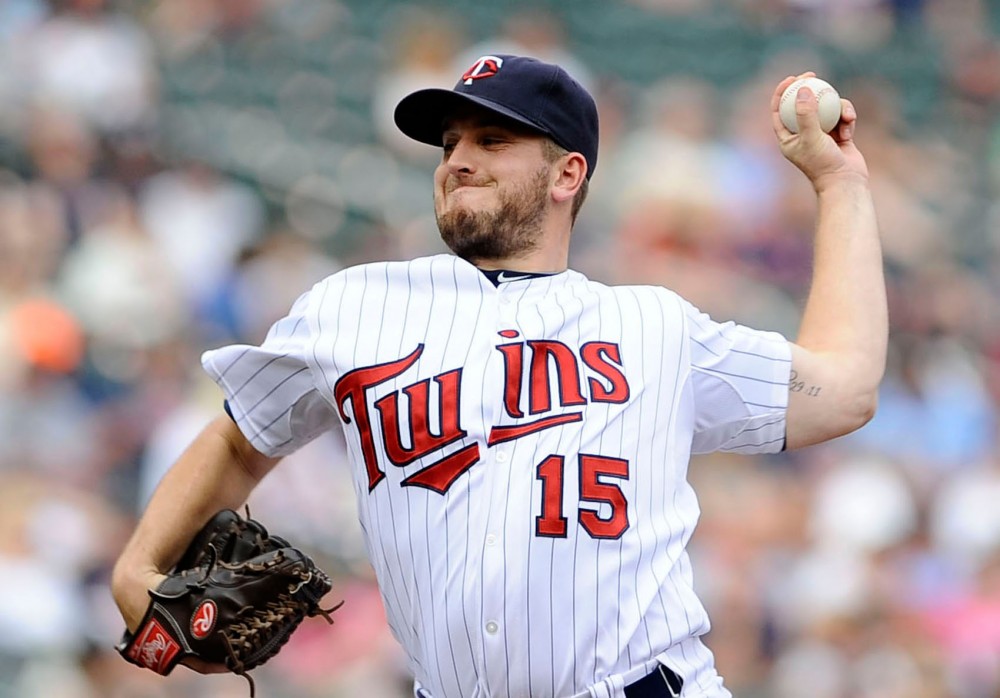 Glen Perkins pitches during the last inning against Detroit Tiger on Sept. 30 at Target Field. Perkins has been playing 7 years for Twins after playing 2 years for Minnesota.

Glen Perkins’ road to the major leagues featured a lot of adversity — much like the 2012 Minnesota Twins’ season.

But Perkins, a former Gophers starting pitcher, had a solid individual season. He appeared in 70 games, posted a 2.56 earned run average and saved 16 games after taking over the closer role.

His team didn’t fare so well, finishing 66-96 and in last place in the American League Central division for the second-straight season.

Perkins, 29, just finished his seventh year of pitching in the big leagues. He’s settled into his role as the top left-handed reliever on a Twins squad that desperately needs good pitchers.

But the southpaw’s road to major league success was no walk in the park. He wasn’t highly recruited out of high school, he struggled with academics and his Major League Baseball career has been a story of ups and downs.

Through it all, his love of the game has kept him going.

“No one ever told me to quit playing, so I just kept playing,” Perkins said. “It’s the kind of thing where nobody’s ever taken the jersey off my back.”

Perkins did not leave Stillwater, Minn., as a highly touted recruit. In fact, Minnesota was one of the few Division I teams that looked at him, he said.

Perkins said he didn’t grow up dreaming of playing for the Gophers, but “if you get a chance to play there you don’t turn it down.”

Perkins’ first challenge was simply getting on the field. Academic issues forced him off it during his first year on campus.

Anderson said Perkins needed to rededicate himself. With help from close teammate Andy Hunter, that’s exactly what he did.

“You hope eventually they figure it out and get it, but you don’t know,” Anderson said. “I was surprised to some degree that [Perkins] stuck it out. I don’t think he would have unless Hunter [had] mentored him and taken him under his wing.”

Hunter said he approached Anderson after the coach thought about telling Perkins a smaller school might fit him better. Hunter requested the opportunity to work with the young lefty. The two became close friends, roomed together for three years and eventually attended each other’s
weddings.

“College in the beginning for him was not a good fit,” Hunter said. “I think the University of Minnesota is a really big place and he, like a lot of freshmen, kind of got lost in it.

“I tried to help him understand that he doesn’t need to do a lot in order to go out and get B’s and continue to be eligible.”

Hunter said he stressed simple things with Perkins, like studying and attending class. He said the two would often study together.

“In the end, I think he realized that the opportunity for him athletically was so great that it just wasn’t worth screwing it up academically,” Hunter said.

Perkins went 19-4 as a starter during his two seasons pitching for the Gophers and had 224 strikeouts. Perkins gave much of the credit for his turnaround to pitching coach Todd Oakes.

“As much as I’ve learned from then to now, I learned as much from [the coaching staff],” Perkins said. Perkins was especially successful in the Big Ten, where he posted a 15-0 record.

“The expectation from him that transcended to the entire team was that on Friday nights we won,” Hunter said, “and it always went that way.”

Anderson said Perkins succeeded in college because he stopped throwing his curve ball and relied more on his fastball and change-up.

“Kids come out of high school, and they physically develop and mature mentally, physically and emotionally at different rates,” Anderson said. “I think all three of those things came together for Glen at the same time.”

Perkins was a second-team All American in both his seasons with the Gophers. He left school early to pursue a professional career.

Home in the pen

The same pitcher whom schools mostly ignored out of high school was ranked 66th in Baseball America’s top-100 prospects.

“We certainly had high hopes for Glen when we drafted him — that’s why we took him in the first round,” Twins President Dave St. Peter said. “He’s been everything and more that we probably should have hoped for in terms of that pick.”

From 2004-08, Perkins spent most of his time pitching for the Twins’ minor league affiliates. He threw 368.2 innings and had 380 strikeouts in that span.

“I made a good transition,” Perkins said. “[The Twins] did a good job — they started me off in rookie ball, and I made three starts there, and like they do with a lot of guys, they took it slow and made sure I was ready for the next level.”

He made his major-league debut on Sept. 21, 2006, against the Boston Red Sox and pitched 1.1 shutout innings. He appeared in three more games that season, all as a reliever.

After making 19 more relief appearances in 2007, Perkins made his first major-league start in 2008. He started 26 games that season and posted a 12-4 record.

The success was short-lived, though, as Perkins went 6-7 in 17 starts the next year. He hasn’t started since.

“I got a chance to be a starter, and that’s, I think, what everyone wants to do,” Perkins said. “A lot of relievers are guys that couldn’t make it as a starter, and there’s nothing wrong with that.”

In 2010, Perkins started the season with the Twins’ AAA affiliate, the Rochester Red Wings. He was called up and sent back down once during the season, but he finished it with the Twins as a September call-up. He only appeared in 13 games that season.

The next two seasons established Perkins as a major  league mainstay in the bullpen. In 2011, the Twins tried using Perkins as a late-inning reliever, and it worked. Perkins posted a sub-3.00 ERA and had 65 strikeouts in 65 games.

Perkins’ success led to a big payday as he signed a four-year $11.85 million contract in the offseason.

He did not disappoint after signing the contract either.

Perkins was one of only a few bright spots on the Twins pitching staff in 2012. He racked up 16 saves after getting the opportunity to close games because the Twins’ incumbent closer, Matt Capps, was injured. It is widely speculated that he’s the front-runner to be the team’s closer next season, too.

“We’ve had a lot of players over time that have gotten a taste of the big leagues only to return to minor league baseball,” St. Peter said. “Glen certainly seems to have found a niche in terms of the bullpen. … He’s got plenty of stuff, but more importantly I think he has the mental toughness to not only survive but thrive in that bullpen environment.”

Nine years after his near fallout with the Gophers, Perkins stays involved with University athletics. His offseason regimen often brings him to Minnesota’s facilities to work out, Anderson said.

“I know Glen wants to give back — he’s talked to me about it,” Anderson said. “He wants to find some way to give back and help somebody out like he was helped at the University.”

Perkins donated money to the school’s Siebert Field project. He said it was the first thing he wanted to do when he heard about the opportunity.

“They’re still a big part of my life,” Perkins said of Gophers athletics. “The guys there mean as much to me as anyone else in my life.”