Zach Budish is getting on track at the right time for the Gophers. 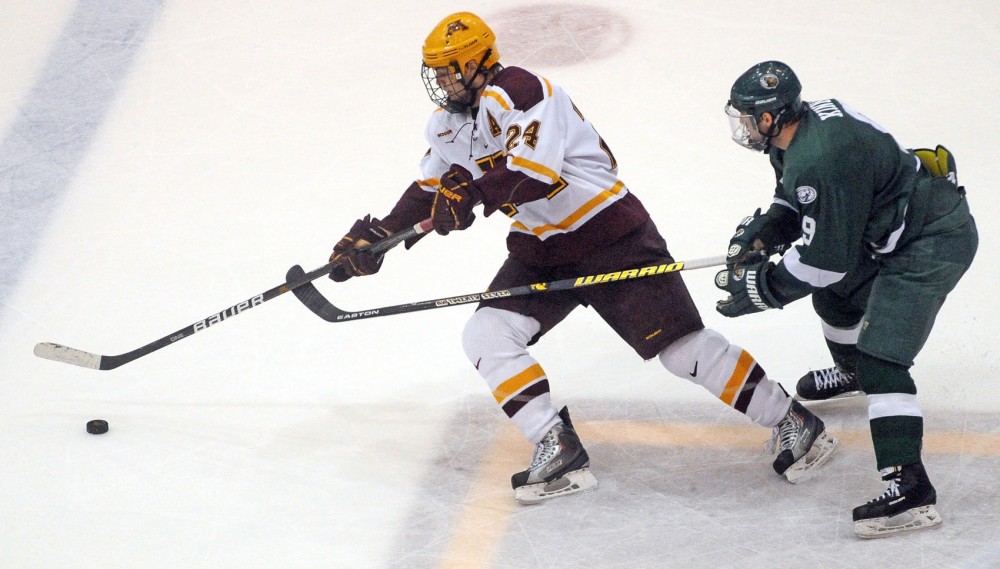 Gophers' forward Zach Budish fends off a Bemidji State defender during a game against the Beavers Feb 17 at Mariucci Arena. Budish scored two goals in the game to lift the Gophers to a 3-0 victory.

Zach Budish has been riding the stationary bike before and after practice to prepare his legs for a potential playoff push.

It seems to be working.

Budish has scored four goals in as many games and seems to have found his legs at the right time.

His legs, however, have never been the problem. His knees are a different story.

Budish has had ACL surgery to repair a torn ligament in his knee twice in the last three years.

“It’s a long process,” Budish said. “I’ve gone through it twice now. It takes a while to get your full strength back … and from there it’s just a matter of getting comfortable and getting used to game speed again.”

Budish recovered and played in all 39 games as a freshman for the Gophers. He spent about half of that season on Minnesota’s first line.

Budish continued to develop and tallied six points in the first seven games of his sophomore campaign before a new setback prematurely ended his season.

Budish lost control of his moped on Nov. 1, 2010 and tore the ACL in his right knee.

“It was pretty frustrating,” he said. “I just wanted to bounce back this year, and that was kind of my motivation over the summer to get back.”

Budish started the season on the Gophers first line alongside Nick Bjugstad and Kyle Rau.

He had a goal and two assists in his first series back after nearly a year of recovery.

“Even at the beginning of the season he was a playmaker,” Bjugstad said. “He was moving the puck really well.”

Budish produced against the weak nonconference opponents, but it wasn’t until mid-November that his stats saw a significant increase.

“I think you’re always going to have a little bit of rust when you miss a year of your season and then that confidence factor when you start to play, how you come off from that injury and surgery,” head coach Don Lucia said.

Budish said he always trusted his knee after the surgery but wasn’t comfortable right away.

“Once you get back to game action, it’s still a little bit of an adjustment,” Budish said. “It took me six or seven games to get back where I was as far as being comfortable on the ice. I’ve just tried to build on that.”

His goal total has spiked in the last two weekends, in which he has netted four goals.

“The puck’s just kind of finding the back of the net, whether it’s off my skate, off a defenseman or popping right out to me like the second goal on Friday,” Budish said. “I’ve just been in the right place at the right time.”

Lucia said Budish is playing his best hockey now because he is being more assertive on offense.

“He’s contributing offensively,” Lucia said. “He’s scoring goals, whereas earlier he was looking to defer a little bit more. Now he’s shooting and taking the puck to the net.”

The Mavericks are fresh off a series split with Colorado College last weekend and are tied for fourth in the WCHA.

Nebraska-Omaha is jockeying for home-ice advantage in the first round of the WCHA playoffs — the top-six teams host their respective first-round matchup.

“They get around the rink really well, [and] they’ve got a very good transition game,” Lucia said. “They can really get after it, so we’re going to have to make sure we’re ready to play a high-speed, high-tempo game this weekend.”

“We’ve talked about it and to do what we want to do this year, we don’t have to leave the state of Minnesota,” Budish said.

If the Gophers want to capture their first national championship since 2002-03, however, they will need to travel to Tampa, Fla., home of this year’s Frozen Four.

“That’s the ultimate goal,” Budish said. “I think that’s everyone’s ultimate goal. We’ve got to put ourselves in a position to get in the tournament, and pretty much anything can happen when you get there.”