She also talked about a potential budget request from the Legislature and her goals for next semester. 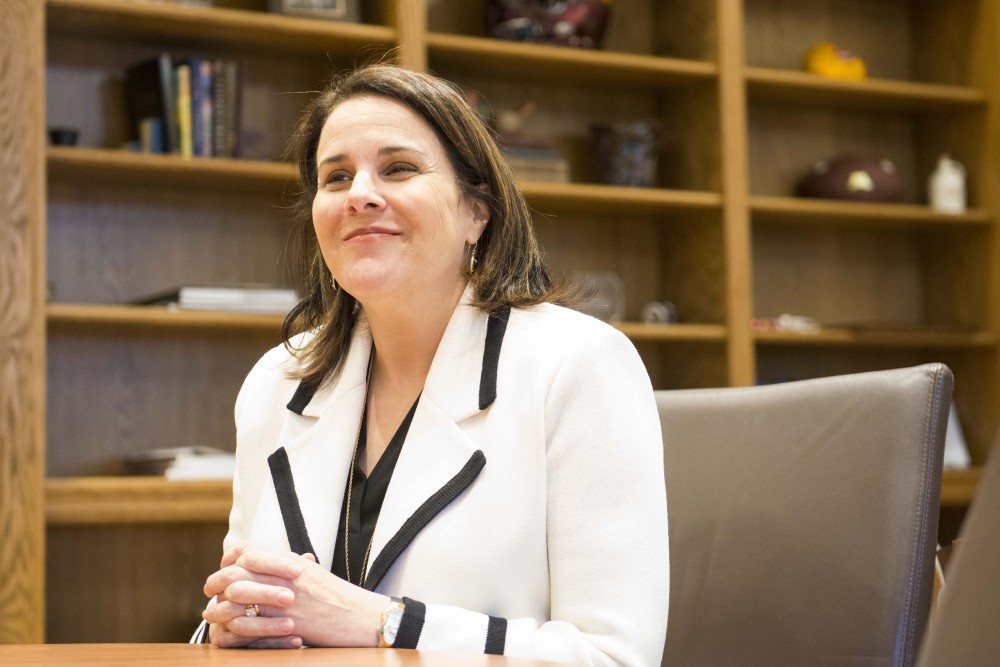 President Joan Gabel discussed the salary for incoming Provost Rachel Croson, the ongoing effort to create procedures around renaming and a potential budget request to the Legislature in her final sit down with the Minnesota Daily of the decade in December.

Do you have any plans for break?

I am going to South Carolina for the first time since the end of June when I drove my car up here with all my boxes in the back. I am going to see my children. All of us will be together, which is a gift when your children are grown, and then I’m going to the bowl game.

There was some pushback on the salary for incoming Provost Rachel Croson. Why is this contract, be it maybe high in some people’s minds, why is it a good investment for the University?

Well, I’ll start with the notion that the contract is high. It’s a big salary. It’s an aspirational salary for a lot of people, but it’s right in the middle of the market nationally. Slightly above market nationally, slightly below market in the Big Ten, which is exactly where we sit for how we make a variety of financial determinations. We figure out what we think people deserve based on markets all the time. It’s how my own negotiation went for my salary, which I know received some criticism at the time too. And it’s what we used to determine a fair salary for her. … I believe we should pay people according to those standards, that that’s the way to be consistent, it’s objective, it’s fact based. And so that’s how we made the decision the way that we did.

But I think that’s totally separate from our excitement about her and what she brings to the table, both in her skill and experience and also in her personality and desire to be here and why she wants to be here. She really has a spectrum of experiences and competencies that I think fit exactly what we want to do. … I think she has it all. What we’ll see come out of that is real action on the execution of our new strategic plan. … And then her partnership with me on some of the things I want to do around student mental health … around making sure our programs impact Minnesotans, are inspired by Minnesotans and are delivered at world class levels.

With [discussion about how the University deals] with the renaming process going on, how do you think descendants should be involved in this process? And should that include both descendants related to the person for which the building was named and [descendants of] people that may have been affected by that?

I believe in both. When we met with the board on this issue during the governance committee [in December], we presented for examples of how this question broadly has been approached. … Each of these policies, handled in different ways but existing in all of them, that says one needs to look at the person in their total context. … So who were they, what the family may have, their own letters, testimonials, service, things that they were doing beyond their work that should be considered. There are also people who would be affected by whatever act has brought that person to the table for consideration about whether they’re deserving of a naming or whether they’re things named for them should be renamed. What the impact was, their conversation, their testimonial, that is a totality. And that is how we should look at these questions.

The state has a budget surplus, how do you want to lobby the Legislature to get more funding for the University?

So we’re in the process of developing that now. We’re glad to see the state have fiscal strength. … So we always have what we have had approved by the board for capital improvements, the kinds of things for which we seek bonding. We have several initiatives that we’ve been talking about around student success, student wellness, how we reach students [and] how we serve the state. And we’re brainstorming now, which of those we could potentially articulate into a proposal for the state.

At the December [board] meeting, you said you wanted to shift money in the University system to pay off the debts the University [campus in] Duluth has. Why did you decide to do that?

We’ve actually been working on that for a long time. Those conversations preceded me. … But the Duluth financial challenges, the structural challenges that they’re going through, took many years to kind of take the shape that they have now and take some real pain and sacrifice to try and resolve. The thought was that there’s not a lot of value in making a lot of people really make very tough choices or have their personal circumstances be really affected negatively, if they can’t start something fresh when they’re done. So the idea is, they’ve made the tough choice, and so we as a system also make the tough choice. We meet in the middle, we make a sacrifice as a system to help them come out from under. They make the sacrifice as a campus so that the debt doesn’t increase so that they’re right sized for the demand for what they offer. And then now when they think to the future, it’s strategically what’s our next, rather than having a cloud over their head.

What are your specific goals you want to accomplish in the spring semester?

We want to get the strategic plan further along. We want to get some real articulation around the student mental health initiative. We will be onboarding the new provost, will be standing up the interim [vice president for human resources] and getting the parts that you can do during the interim phase going. We’ll make a budget proposal. It’s important to note around the budget proposal that this is year two of the [former President Eric] Kaler budget because we do biennial budgeting, so there are fewer degrees of freedom than there would be if it were your one of the next biennial budget. But within those degrees of freedom, we’re looking at the budget proposal that we’ll make to the board. And it looks like we’ll be coming forward with maybe some proposals for resources from the budget surplus and going through the process for that.

This interview has been edited for length, grammar and clarity.