Though Minnesota farmers have adjusted practices to offset a downward spiral of crop prices, their income has dwindled. 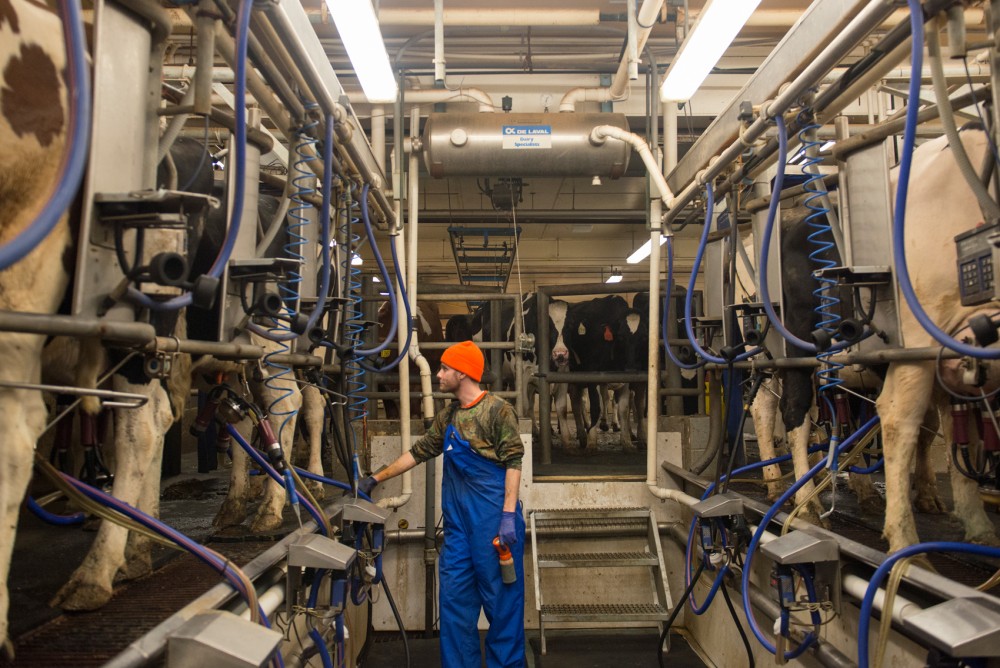 Lead milker Zach Beach stands in the Dairy Cattle Teaching and Research Facility as the cows are machine milked on Tuesday.

Annalise Gall
Though 2015 was a record year for crop yields, farm incomes hit a 20-year low.
Low prices for crops hurt nearly all types of farmers this year and affected goods ranging from soybeans to dairy products. Estimates show the agricultural industry will face an even tougher row to hoe in 2016 as farmers will be forced to further tighten their belts to combat income decreases.
The median income for Minnesota farmers last year was about $27,000 — down 37 percent from 2014, according to an annual farm income analysis conducted by Minnesota State Colleges and Universities and University of Minnesota Extension.
Income decreases were caused by a downward spiral of crop prices that began in 2013. The average price per bushel of three main crops — corn, soybeans and wheat — have decreased by about $1 since 2014.
Farmers have adjusted their practices to mitigate the effects of low prices wherever possible, said Director of AgCentric Keith Olander, who worked on the study.
“Farmers are great [conservers],” he said.
But making immediate adjustments isn’t feasible for all farmers, said Associate Director of the Center for Farm Financial Management Dale Nordquist, who also participated in the study.
“If you are a corn and soybean farmer, you can’t just switch to strawberries,” he said.
Even organic farms, which operate in different markets than traditional ones, weren’t spared said Jared Luhman, a 2015 agricultural education graduate.
Because organic farms don’t rely on pesticides, their biggest threat is weed growth, he said, and that conditions for crop growth are also ideal conditions for weed growth.
But Luhman said that for his family’s organic farm in Goodhue, Minn., an abundance of weeds helped limit crop yields, which tightened supply and demand close. Still, this was not enough to offset low prices, Luhman said, and his farm still took a hit.
University junior Ethan Dado’s family also felt pressure on its 450-cow dairy farm in Wisconsin. Dado said his family hired new workers as part-time employees, rather than full-time.
Beyond optimizing production and minimizing costs, some farmers may take more drastic measures such as finding part-time jobs or looking into different careers, Olander said.
“Farmers will be making decisions to [either] not produce or … produce other products,” he said.
To combat these setbacks, Olander said that consumers should engage with their local farmers to educate themselves on the processes that produce their food.
Farms benefit from consumers’ awareness of what they eat, said Senior and Agricultural Education club president Katie Schmitt.
“It’s our desire as farmers that people understand how we grow food and the technology behind it and why it is safe,” she said.
Despite predictions of several more seasons of low prices —and Nordquist said 2016 will be even tighter than last year — University students entering the agricultural industry remain optimistic, said Senior Rick Ancel, who’s pursuing a career in agronomics with Land O’Lakes.
“Just like other economies, it will cycle back,” he said.
Schmitt said her peers who want to farm are aware of the risks associated with the fluctuating nature of the field.
“You have to get through the bad years to get to the good years,” she said.
Delete Image
Align Left
Align Center
Align Right
Align Left
Align Center
Delete Heading