The only thing funky about this ‘70s gem is its misleading title.  “Sorcerer” is a moody, beautifully shot and tensely scored character study with a simple premise executed perfectly. And it has nothing to do with fantasy or magic, rather, “Sorcerer” depicts a group of downtrodden outcasts driven to do an impossible task in the jungle of a fictional South American dictatorship. It’s directed by William Friedkin, and I suspect his success at the helm of “The Exorcist” — for which he won an Oscar — and “The French Connection” is the reason why this film gets overlooked. 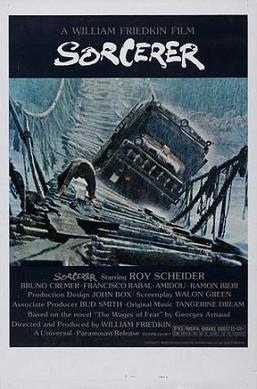 “Sorcerer” stars Roy Scheider, who was also in “The French Connection” and was fresh off the success of “Jaws,” as one of four men whose lives have taken sudden turns that necessitated leaving and pretty much starting over.   He was involved in a heist gone bad, one guy is a French businessman in crushing debt, one is wanted for a terrorist activities in the Middle East — all of the characters are generally bad news with shady dealings and even shadier pasts.  That’s why they’ve chosen to work for a backwoods oil company in an underdeveloped country in the midst of violent strife.

When their company's oil field has a terrible accident and catches fire, they sign on to deliver a load of highly unstable nitroglycerine through miles of jungle on poor roads and ancient trucks.  Their reward: enough cash to get out and start over, again.  It’s Hitchcock-level suspense for more than half the picture.

The introductory vignettes that establish each of the characters are just enough to give a comprehensive sketch of the relevant individuals and their respective motivations, without bogging down the film in too much establishing explication. Each is a mini-thriller unto itself, exquisitely nestled in the framework of this stunner.   From there it’s on to the sweltering jungle — long looks, oily countenances, an air of oppressive desperation — where the real action kicks off.

It’s there that the tension carries the movie. We’re constantly thinking that at any moment someone could break and go nuts, that one hard pothole will set off the nitro or that a ghost from the past could loom around the corner.   Oh, and the ending is wicked unexpected.

If you’re digging Friedkin’s guidance after “Sorcerer,” take a look at 1985’s “To Live and Die in L.A.,” a crime thriller revolving around a counterfeiting case starring Willem Dafoe and William Petersen. "Live and Die" has a fantastic car chase.