The University of Minnesota could soon feel the effects of the largest nursing strike in U.S. history. 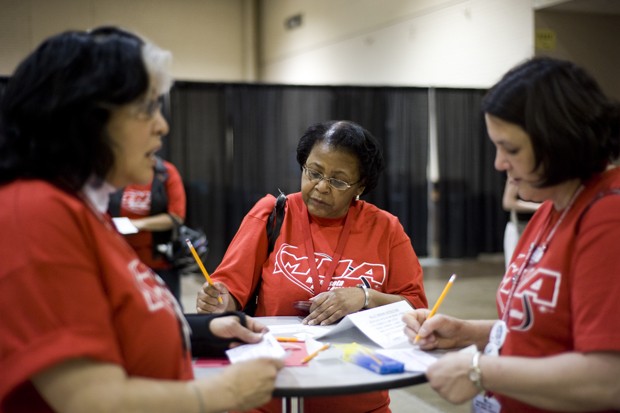 Children’s Hospital of Minneapolis nurses Sandra Abraham, left, Beverly Clark, center, and Barb Wiemann, right, vote on whether to authorize a strike on Wednesday at the St. Paul River Centre. The strike would create the largest nurses strike in US history.

The University of Minnesota could soon feel the effects of the largest nursing strike in U.S. history. More than 9,000 nurses from 14 hospitals in the Twin Cities area gathered last Wednesday to vote on whether to authorize a strike. Their decision was a resounding âÄúyes.âÄù More than 90 percent rejected the hospitalsâÄô most recent contract proposal, voting in favor of a strike. âÄúIt sends a strong message to the employers that weâÄôre serious,âÄù John Nemo, spokesman for the Minnesota Nurses Association, said of the voting results and turnout. MNA represents 12,000 nurses as they negotiate a new contract for the next three years. The current contract expires May 31, but the bargaining has come to a halt since the vote took place. Negotiations, which began in March, are locked in a stalemate. Both the nurses and hospitals have called on one another to return to the bargaining table and negotiate fairly. If an agreement cannot be reached, all 12,000 nurses will walk away from their jobs for one day, perhaps as early as June 4. MNA is required to file a strike notice 10 days in advance. As of press time, the nurses had not given the hospitals such notice. If that notice is given, a contract can still be finalized, and the strike avoided. Both parties agree a strike can be avoided. âÄúThereâÄôs no need for a strike,âÄù said Maureen Schriner, spokeswoman for the six hospital systems involved. âÄúWe could settle it very quickly.âÄù Settling to avoid a strike will require the two parties come to an agreement on the two most contentious parts of the new contract: staffing levels and pensions. âÄúThe ideal contract is going to allow our nurses to have a voice that is listened to and valued when it comes to delivering patient care,âÄù Nemo said. Schriner said the hospitalsâÄô proposal gives the head nurse the power to decide whether more nurses need to be called in or sent home based upon an evaluation of patient numbers and sickness on each floor. Some MNA nurses want to establish a required ratio of patients to nurses. Such a system would protect jobs as well as patientsâÄô lives, said Tim Johnson, a nurse at the Riverside campus of the University of Minnesota Medical Center, Fairview. Johnson said these ratios are not uncommon across the nation. âÄúWeâÄôre really not breaking totally new ground on this, but we really think itâÄôs critical to saving lives,âÄù he said. The nursesâÄô proposed staffing level changes would raise metro area hospital costs by $250 million annually, Schriner said in a press release. In addition, the hospitals are proposing to cut the nursesâÄô pension plan from 1.75 percent to 1.2 percent to make it more âÄúeconomically feasible,âÄù Schriner said. Many of the hospitalsâÄô proposed changes were made in light of the economic turmoil, she said. Nemo said he is not convinced the changes are necessary. âÄúItâÄôs not that they canâÄôt afford a pension or any of the other economic issues,âÄù he said, âÄúitâÄôs that they donâÄôt want to.âÄù Past, present and future Minnesota has a history of nurses walking the picket lines, but Nemo said the issues at the heart of each strike are similar. âÄúI think itâÄôs the same song, different decade,âÄù he said. âÄúThis is not new territory.âÄù The largest nursing strike in U.S. history occurred in 1984, when 6,000 nurses left hospitals for 38 days. In 2001, the threat of a strike held a grip on Twin Cities hospitals until just hours before temporary nurses were due to replace those planning to strike. Five of the six hospital systems reached an agreement before the strike began. Nurses from Fairview left work for three weeks before renewing a contract. The current economic and political climate may set this strike apart from its predecessors, said Connie Delaney, dean of the School of Nursing at the University of Minnesota. âÄúThere are such profound pressures on the health care system, health care reform and on nursing right now,âÄù she said. In the event of a strike, the School of Nursing has backup plans for nursing students to continue clinical practice in place, Delaney said. The hospitals involved are bracing for a possible strike as well. Part of their contingency plan is to hire temporary nurses to replace those on strike and to reorganize other staff to maintain high quality care, Schriner said. The two Fairview hospitals involved – Fairview Southdale and the Riverside campus of the University of Minnesota Medical Center, Fairview – will remain fully open, and no appointments or surgeries will be rescheduled if a strike occurs, spokesperson Ryan Davenport said. The University campus of the University of Minnesota Medical Center, Fairview is not involved in the contract negotiations. Schriner said she is confident a new contract can be agreed upon before a strike happens. âÄúIn most of the cases, thatâÄôs what weâÄôve done,âÄù she said, pointing to the case in 2001 as an example. As nurses sat around last Wednesday at the RiverCentre in St. Paul watching their colleagues cast their vote, the mood in the air was undoubtedly positive. Rock music blasted over the loudspeaker system, but there was still an air of tension and doubt. âÄúItâÄôs a scary time for everybody,âÄù said Amy Bertram, a nurse at Fairview Southdale. âÄúWe could potentially be part of the biggest nursing strike in U.S. history.âÄù