The women need to finish in the top two to advance to the NCAA championships. 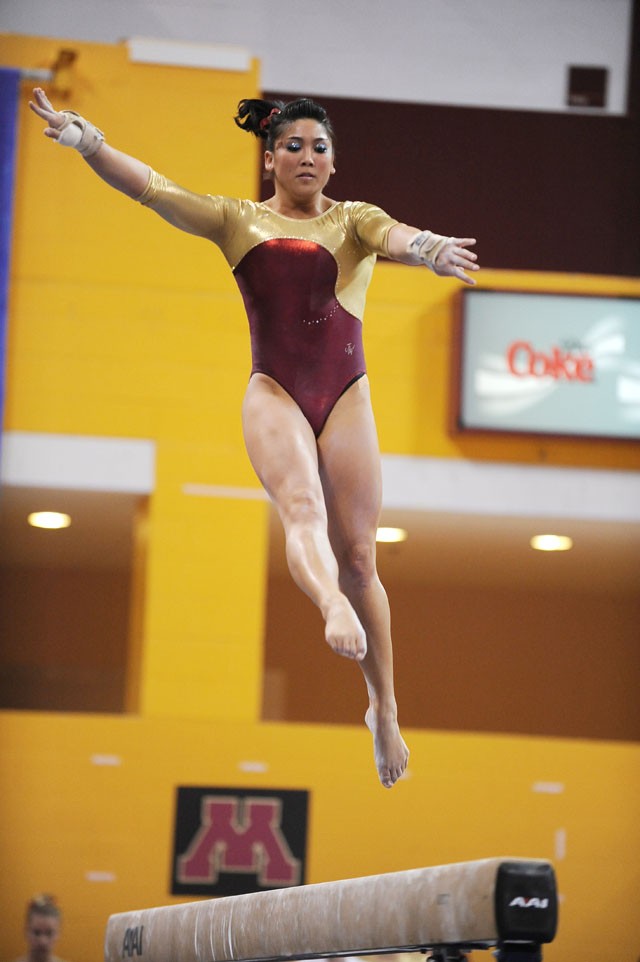 The three competing seniors on the Gophers womenâÄôs gymnastics team know the stakes at this weekendâÄôs NCAA regional.

âÄúI think they donâÄôt want to be done,âÄù coach Meg Stephenson said of the seniors. âÄúTheir mindset is [that] weâÄôve got regionals, and then weâÄôve got one more meet.âÄù

No. 23 Minnesota enters SaturdayâÄôs regional meet in Ann Arbor, Mich. ranked fifth of six competing teams. In order to advance, the Gophers need to finish in the top two to claim an automatic berth to the NCAA championships, something they havenâÄôt done since 2002. Senior Kendra Elm wonâÄôt be thinking about the possibility of ending her career this weekend.

âÄúWe try and focus on our gymnastics and our events,âÄù she said. âÄúSo that way nothing else gets in the way.âÄù

One thing that has gotten in the way for the Gophers this season is injuries. Elm was among the numerous victims, pulling a calf muscle a few weeks ago that has since healed. Freshman Dusti Russell missed five weeks earlier this season with an elbow injury, but she will also be in action this weekend.

Two gymnasts the Gophers need to perform well are senior Kristin Furukawa and freshman Kayla Slechta, who have been two of the most consistent scorers all season. Slechta is rated fourth on vault in the Big Ten, and Furukawa is tied for eighth on uneven bars. Elm might be the GophersâÄô best shot in the all around, entering the meet 10th in the conference.

Playing the underdog role is nothing new for Minnesota. At the Big Ten meet two weeks ago, the Gophers were ranked sixth of seven teams but came away with a fourth-place finish.

âÄúWe definitely have the potential all over the place for individuals and the team to go to nationals,âÄù Elm said. âÄúItâÄôs just a matter of getting it done.âÄù

Men hope to do damage at Big Tens

In the Gophers menâÄôs gymnastics teamâÄôs final meet before the Big Ten championships, the team didnâÄôt exactly gain momentum. Minnesota lost to Iowa and Nebraska, two teams ranked lower than the No. 7 Gophers.

Junior Adam LaFleur will use the loss as motivation when the team travels to Champaign, Ill. for the conference meet, which begins Friday.

âÄúI want to keep remembering the feeling of that loss,âÄù LeFleur said, âÄúbecause we had been beating those teams consistently.

The Gophers will need a strong performance this weekend if they hope to vie for the conference crown because they head into the meet ranked fourth of six Big Ten teams.

âÄúIf we do what weâÄôre capable of doing in that event, it will be a great emotional boost,âÄù Burns said. âÄúA lot of times that can carry through the meet.âÄù

The men havenâÄôt finished better than fourth since 2006-07 when they claimed third place at the Sports Pavilion.

Illinois, the host and defending conference champion, comes in ranked No. 4 in the country and best in the Big Ten. Burns said the Illini certainly deserve to be the odds-on favorite, but the Gophers have been consistent for most of the year. They also have the depth to avoid any colossal meltdowns on a single event.

âÄúWeâÄôre pretty much going to leave it all out there,âÄù LaFleur said. âÄúWe just need to put an entire meet together where weâÄôre just all on the same level.âÄù