Lucia led the team to two national championships in his 19 years at Minnesota. 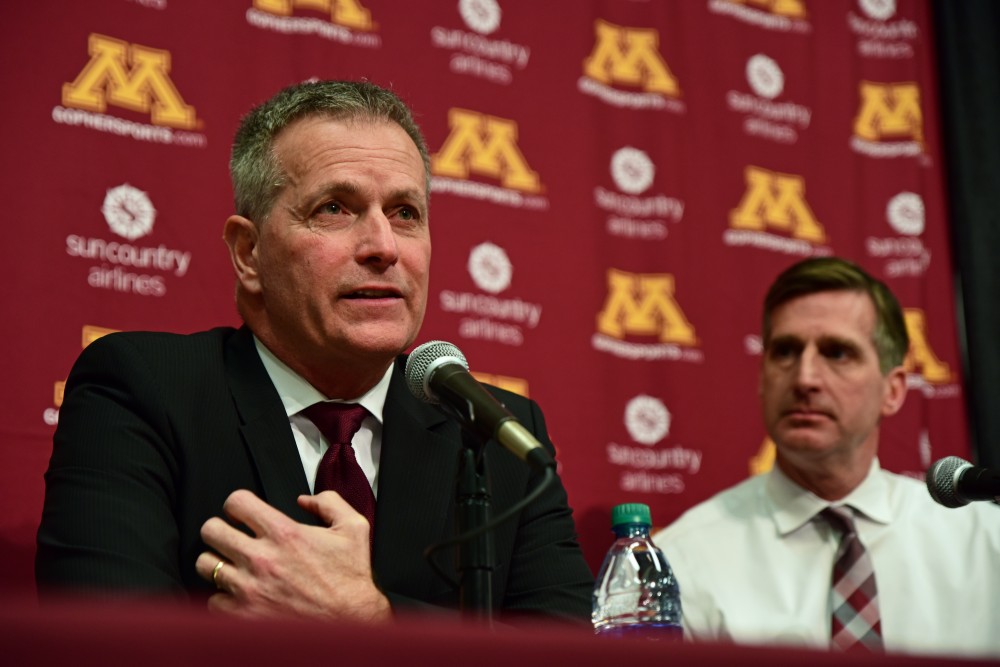 Don Lucia speaks about stepping down as the Gophers men's hockey head coach during a press conference on Tuesday, March 20. Lucia coached the team for 19 years.

Minnesota men’s hockey head coach Don Lucia is stepping down after 19 years at the helm of the program.

Lucia will end his tenure at the position, pending approval from the Board of Regents. Lucia will remain as a special assistant to athletics director Mark Coyle until June 30, 2019.

“In my mind, I kind of knew where I was at,” Lucia said. “I knew the last month or two, even when things were going well.”

Lucia and Coyle held a press conference Tuesday following the announcement and Lucia was content about his decision. Though he will not return behind the bench, he will spearhead the fundraising needed for the weight room at 3M Arena at Mariucci until his contract expires on June 30, 2019.

Lucia was hired in 1999 and shortly became just the second head coach at Minnesota to win a national title with the Gophers. He won the national championship back-to-back seasons in 2002 and 2003, with 2002’s victory in front of a Twin Cities crowd at the Xcel Energy Center.

Beyond his national championships with the Gophers, he led the team to five Frozen Four appearances, eight conference championships and 13 trips to the NCAA Tournament.

Before his exit as coach, the Gophers had an unlikely path to missing the NCAA Tournament after the program’s first season not at the top of the Big Ten. This season’s absence in the tournament marks the second time in three seasons that Minnesota had not qualified.

The Gophers finished fifth in the Big Ten this season with a 19-17-2 overall record and a 10-12-2 Big Ten record, the first time they hadn’t finished first in the conference after the regular season. They lost their last four games of the season — all to Penn State.

The Gophers won their regular season conference for six consecutive years until the 2017-18 season, an NCAA record.

Lucia and his staff had developed eight All-Americans in his tenure, with captain Tyler Sheehy as the most recent example. The Gophers have 23 former players in the National Hockey League for the 2017-18 season, the most of any college hockey program.

The Grand Rapids, Minnesota native will hold the title of the program’s winningest coach of all time for the foreseeable future, he tallied 457 wins over his 19 years, 67 wins over his predecessor Doug Woog.

“I hope I’m there for [the next coach] like Doug was there for me,” Lucia said. “Doug and I had a really good relationship. I remember the first game we won, I would come down to the locker room and Doug [is] in the locker room eating pizza with the guys before I get in there.”

As for the next coach, it is too soon to tell. Lucia made sure to acknowledge his associate head coach for many years, Mike Guentzel, in regards to consideration for the next head coach when asked.  Lucia said Coyle wants his help in finding the next coach, but Coyle said that he believes the hockey head coach job is a coveted position at Minnesota and that it is “the best hockey job in the country.”

Lucia played his high school hockey in Minnesota with Grand Rapids, but went to college at Notre Dame and graduated in 1981. From there he went on to coach at Alaska Fairbanks, Alaska Anchorage, Colorado College to Minnesota.

“I feel so blessed to do what I’ve done,” Lucia said. “Just like it was my time 20 years ago, it’s somebody else’s time now.”