The 21-year-old Eden Prairie native has turned his dream into a daily ritual. 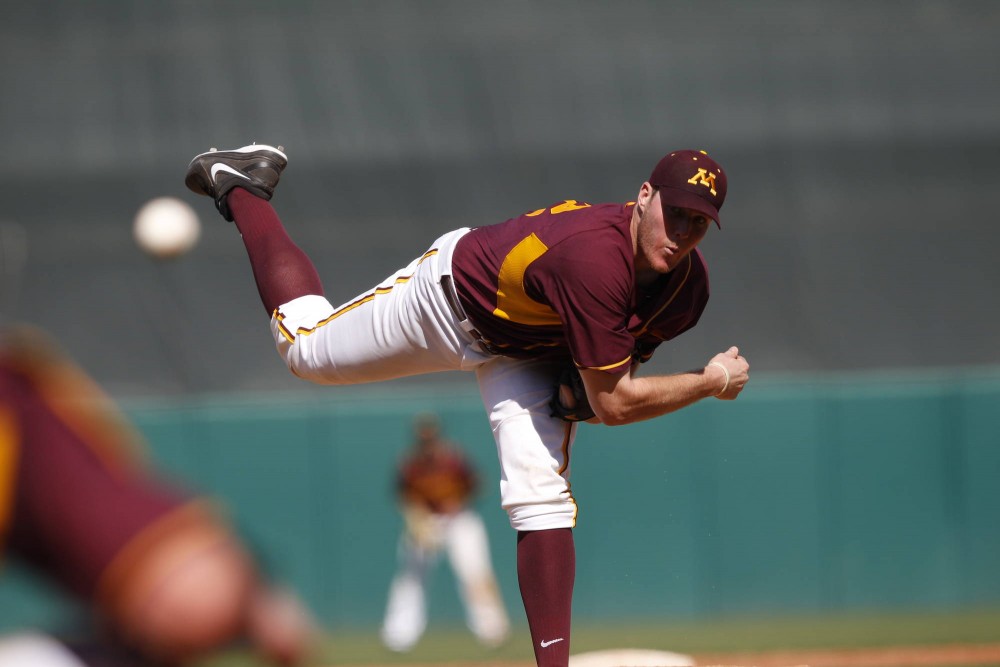 Growing up, Lance Thonvold often played catch in his backyard with his father.

The ball would zip back and forth, and so too would the chatter and offhanded conjectures of what it would be like to play baseball in the Cape Cod Baseball League.

“We always talked about how it’d be really cool if I had the chance to play in the Cape Cod league,” he said.

This summer, the rising Gophers junior right-hander is fulfilling the dream.

More than 1,000 of Cape Cod League alumni have gone on to play Major League Baseball, including Frank Thomas, Tim Lincecum and Nomar Garciaparra.

As a lead-up to the stiff competition waiting in Cape Cod, Thonvold posted 13 appearances out of the bullpen for the Gophers in 2014.

The reliever waded through a few rough outings early on, which he said left him with lingering frustrations.

But Thonvold bounced back and held a 3.60 ERA in Big Ten play by season’s end, holding opposing conference hitters to a .211 batting average.

As the door closed on Minnesota’s 2014 season, another one was opening for Thonvold.

The Hyannis Harbor Hawks, located in Massachusetts, had had positive outcomes with Gophers players in the past and welcomed Thonvold aboard. He agreed to join for a temporary stay in June.

Within the family, father Dennis Thonvold said the excitement was palpable.

“[My wife and I] just couldn’t believe the pride and elation we felt at that moment,” he said.

But he almost missed it. Dennis Thonvold flew into Boston, where he was stuck in standstill traffic — a typical 90-minute drive took three hours.

“I eventually pulled into the parking lot figuring the game was over but, ‘Hey, I might see Lance boarding the bus or something.’ I approach the field and see it’s the bottom of the ninth inning,” he said. “Seconds later, Hyannis’ manager was signaling to bring Lance into the game. It was his first opportunity to pitch. Here I am, coming down to see him, thought I missed the game … yet I was able to see my son’s first opportunity on the mound.”

Through his first six appearances, Lance Thonvold held a 3.24 ERA and a .242 opponent batting average coming out of the bullpen.

Hyannis decided it didn’t want Thonvold just for June — the team wanted him for the entire summer. The ball club extended his temporary deal for the remainder of the season.

Dennis and Lance Thonvold all noted a new change in maturation and poise when the Gophers player takes the mound — qualities powered by habit, not performance.

“I’m not surprised he [had] some success out there in the Cape Cod League. He always had the physical stuff,” Anderson said.

Despite his summer successes, Thonvold is already thinking about how the experience will help him next year at Minnesota.

“I’ve got fall to improve myself, and hopefully [by then] I have done enough out here where I could come back and push myself into a bigger role into the 2015 season,” Thonvold said.