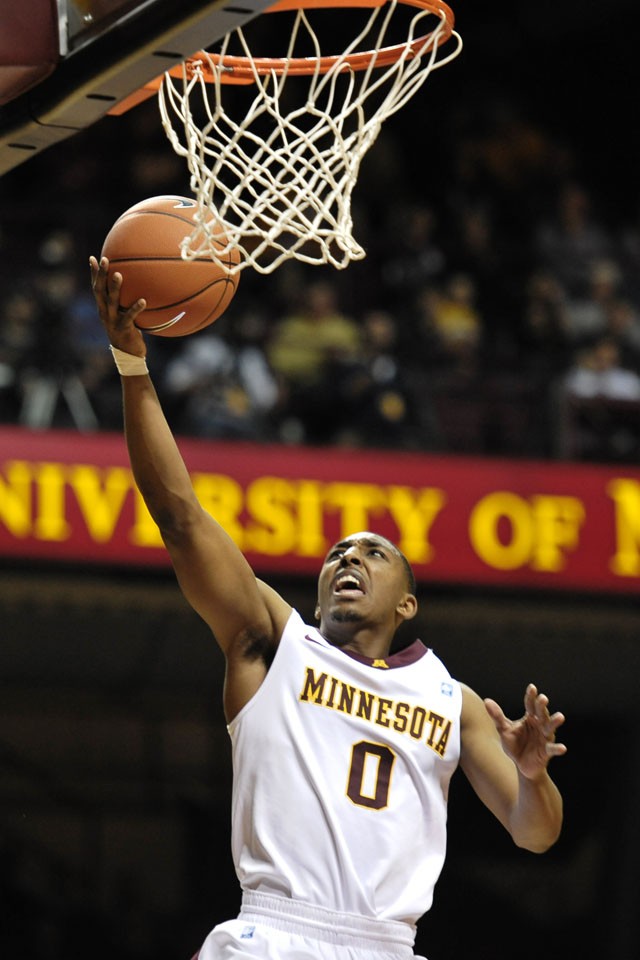 The main goal of the Big Ten/Atlantic Coast Conference Challenge has always been to see which conference reigns supreme.

Generally, that means the Minnesota menâÄôs basketball team draws a middle-of-the-road or worse opponent from the ACC because thatâÄôs where the Gophers typically finish.

This year, though, many consider the 15th-ranked squad a lock to top a young Virginia team (3-3), but with injuries to two starters and the indefinite suspension of Devoe Joseph possibly continuing through MondayâÄôs game, Minnesota is lucky to have a favorable matchup.

âÄúThey want to watch him and get him off his feet for a while,âÄù Smith said. âÄúIâÄôm not sure how long that will be.âÄù

The senior captain is the defensive backbone for the Gophers (6-0), averaging 2.8 steals per game. HeâÄôs also shown improvements offensively with averages of 9.2 points and 4.2 assists per game in 31.8 minutes per contest.

For better or worse, the veteran Minnesota players do have some experience playing without Nolen, who missed the final 17 games of last season due to academic eligibility issues.

Last season, though, Joseph stepped into NolenâÄôs place to help lead the Gophers to the Big Ten TournamentâÄôs title game. Joseph has yet to play this season, and Smith is waiting until Monday to decide whether he will lift JosephâÄôs suspension.

âÄúIâÄôve just got to look at some academics things heâÄôs got to finalize, so hopefully heâÄôs got it done,âÄù Smith said of Joseph. âÄúI know heâÄôs been working hard on it, and I know heâÄôs anxious to get back out here, and weâÄôre anxious to have him back.

âÄúBut heâÄôs only going to be back if he takes care of all of his business.âÄù

Smith was also noncommittal about his starting roster for Monday, but if he had to guess, he said freshmen Maverick Ahanmisi and Austin Hollins would start in place of Nolen and Rodney Williams, who is âÄúdoubtfulâÄù after twisting his ankle during WednesdayâÄôs win over North Dakota State. Ahanmisi, a point guard who can score, and Williams, a wing, have both played well in limited time this season, and Smith said their experience to this point should help make the increase in minutes a smooth transition.

Hollins started against Siena in place of Williams, who was being disciplined for undisclosed reasons, and played a season-high 23 minutes against NDSU, much of which came after WilliamsâÄô injury.

âÄúIâÄôve always been confident in these freshmen,âÄù said senior Blake Hoffarber, who will see an increase in point guard duties Monday. âÄúTheyâÄôve been learning a lot, and theyâÄôve been learning fast so thatâÄôs crucial. Hopefully they can just keep stepping up like they have been.âÄù

Hoffarber has also been battling ankle injuries but said he was âÄúfeeling goodâÄù Saturday. The Gophers are fortunate to have the depth recent Minnesota squads lacked, and a tough schedule to open the season helped all the freshmen gain valuable experience that should help until Nolen returns.

âÄúWhen you have injuries and you have things happen and you donâÄôt have your regular people available to you, then youâÄôve got to have âÄ¦ given them an opportunity so theyâÄôre confident they can go in the game and get the job done,âÄù Smith said.

Against the Cavaliers and moving forward, Hoffarber will need to continue his scoring frenzy (averaging 17.6 points over his last five games). But Smith said the Gophers will try to look to their big men and some combination of Ralph Sampson, Trevor Mbakwe, Colton Iverson and Mo Walker to flourish without Nolen.

âÄúThatâÄôs one of the best things about our team: that we donâÄôt depend on one person,âÄù Mbakwe said. âÄúWe depend on everybody, and any given night anybody could step up.âÄù