Minnesota’s season ends in first round loss to Wisconsin 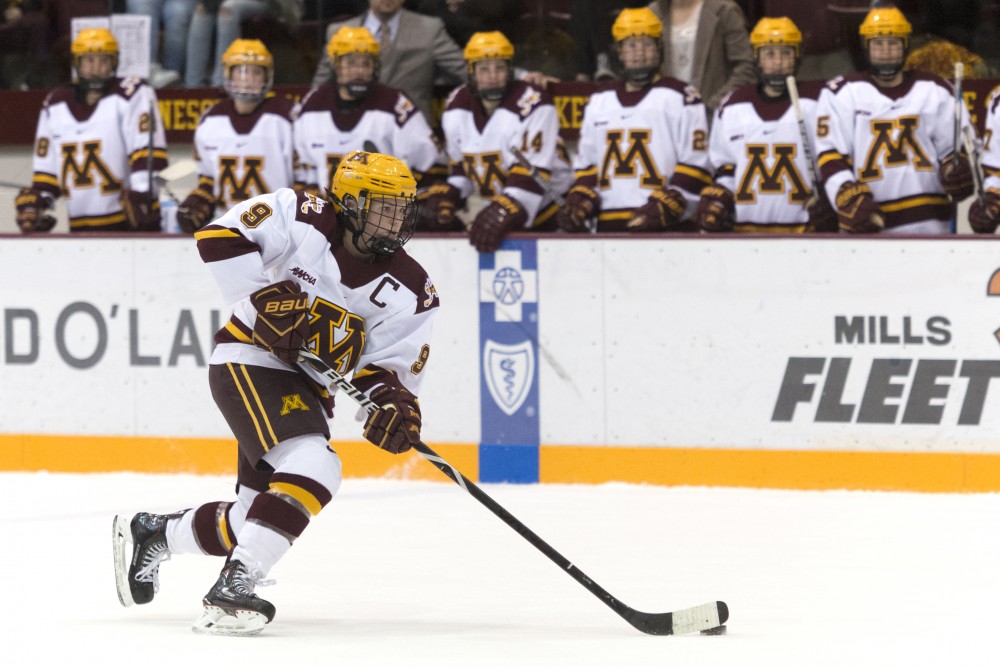 The Gopher women's hockey team watches on as senior defenseman Sydney Baldwin brings the puck down the ice on Dec. 1, 2017 at Ridder Arena.

The last time the Gophers didn’t make the Frozen Four, the year was 2011.

That changed when a trip back to Ridder Arena and a seventh straight Frozen Four was on the line in Saturday’s game against Wisconsin.

Minnesota (24-10-3) lost to Wisconsin (30-4-2) 4-0 in the NCAA quarterfinals on Saturday at LeBahn Arena in Madison, Wisconsin. With the loss, Minnesota’s season is over.

It was just a week ago when Minnesota beat the same Wisconsin team, however, on Saturday, a trip to the Frozen Four wasn’t meant to be for the Gophers.

“I think they played a much better game today than the last time we played them,” senior goaltender Sidney Peters said. “They came out today flying and they deserved that win.”

Minnesota entered the third period down three goals. The Gophers registered one shot on net in the period. With 1:51 left in the game, Wisconsin’s Claudia Kepler sealed the victory and a trip to Ridder Arena for Wisconsin, scoring on a rebound.

The Badgers came out strong, firing 14 shots at senior goaltender Sidney Peters, while the Gophers only managed to get five shots on the first team all-WCHA goaltender Kristen Campbell in the first period. Minnetonka native Presley Norby scored on a rebound shot form her knees with 9:52 during the first.

Sophomore Abby Roque extended the Badgers’ lead to 3-0 with two goals in a matter of 16 seconds. First, with 13:40 left in the second period, Roque received a pass from Maddie Rowe on a 3-on-2 and beat Peters with a wrist shot that made it 2-0.

On the ensuing faceoff, Wisconsin won the puck and Roque ripped a wrist shot past Peters once again just 16 seconds after the first goal.

“You never want to let two goals in a row like that, so I think that was a big momentum shift for Wisconsin and really kind of got their knife in us at that point,” Peters said.

“Proud of the growth our group has shown throughout the year and to get to this point,” head coach Brad Frost said. “ It has been a really fun year and I am proud of these guys.”

Next year, the Gophers return gold medalist Kelly Pannek, along with Sarah Potomak and her sister, Amy. Sarah and Pannek were first and second in goals on the team, respectively, during the 2016-17 season.

“It will be tough having the Frozen Four at our place, but it’s been a great run,” Frost said. “Just to get the tournament has been tough and we have been able to do that for a number of years as well.”