Minnesota hopes to build off upset

Minnesota has four more games left in the season before the Big Ten tourney. 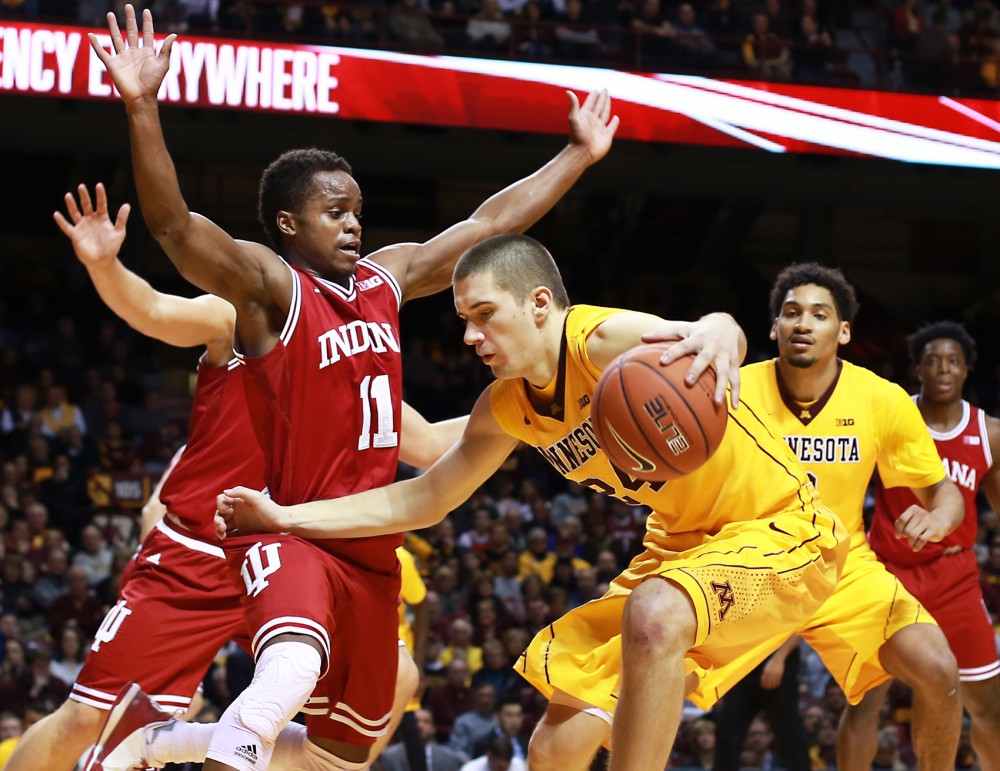 Minnesota forward Joey King pushes through Indiana's defense at Williams Arena on Jan. 16, when the Gophers lost to the Hoosiers 70-63.

Ryan Falk
The Gophers have a reason to remain positive late in the season.
The 68-63 upset victory over Maryland Thursday night at home snapped a 14-game losing streak and allowed the team’s coach to be seen getting coffee.
“I can start going inside the Starbucks instead of going through the drive through,” head coach Richard Pitino said after the victory. “[The losing streak] was a brutal stretch so I’m going to enjoy [the victory].”
Minnesota has four games left in the regular season before the Big Ten tournament, and the team will try to build on the success it had against Maryland.
The Gophers won their first Big Ten game thanks to free throw shooting, something they’ve struggled with all year.
Minnesota is ninth in the Big Ten in free throw percentage at .713, and missed opportunities at the line cost the team earlier chances to win in conference play.
Thursday night, the Gophers made 20 of 23 free throws. Freshman Jordan Murphy made seven of his eight free throws even though he’s shooting a team-worst .622 percent from the line this season.
“We were able to step up to the free throw line and knock down our free throws,” senior forward Joey King said after the victory against Maryland Thursday. “All the credit to Murphy. He’s had a tough time at the line throughout the season, and the past couple games he’s just stepped up and knocked them down with extreme confidence.”
Minnesota grabbed 40 rebounds in the game, 11 of which came on offense. The team is averaging 34.2 rebounds per game, but has 40 or more in its last two games.
The Gophers defense has also started to come together after struggling much of the season.
The team held Iowa, the second-highest scoring offense in the Big Ten, to five points below their scoring average in a 75-71 loss.
Maryland, which has the second best shooting percentage in the Big Ten, shot 37.5 percent from the floor against Minnesota, more than 11 percent below their season average.
“I am a defensive-minded coach,” Pitino said after the victory against Maryland Thursday. “I want to get stops and I want to get out on the break, and tonight we did that.”
The Gophers hope the improvements carry over into the rest of the regular season as the team tries to win more than one conference game.
“It’s an exciting time, and something we can build on over these next four games leading into the Big Ten tournament,” King said after Thursday’s victory. “You know, it’s been a long season, but you know we still have a fighting chance every single game to win.”
Delete Image
Align Left
Align Center
Align Right
Align Left
Align Center
Delete Heading