With 70 acres of land, U plans housing, retail development 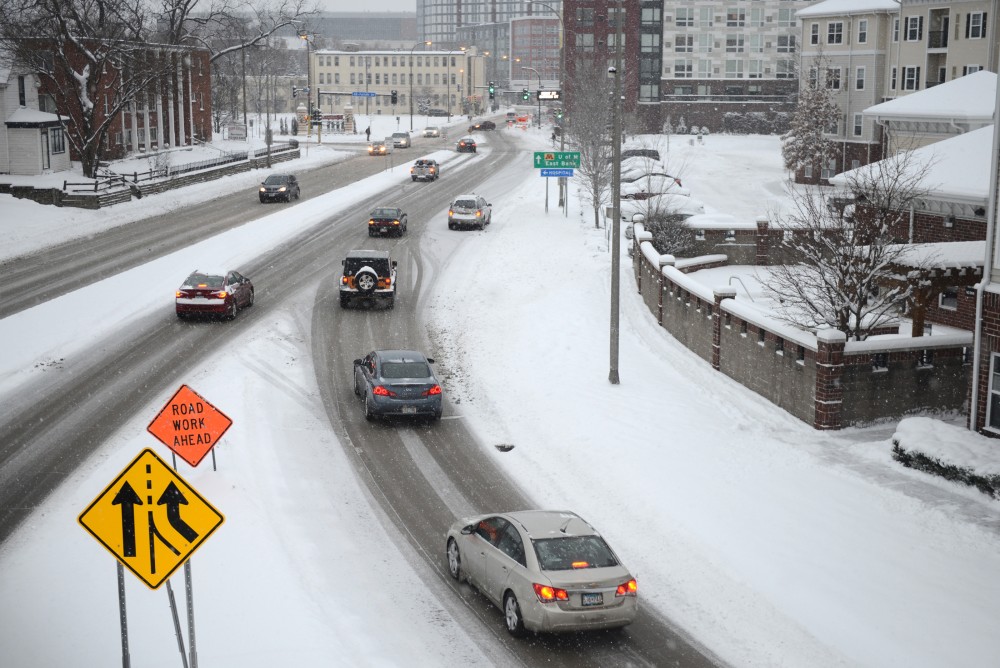 Drivers use Huron Boulevard to enter and exit the University area on Dec. 12, 2016. The area, which sees a high volume of traffic during most University sports and events, is under review by the Board of Regents for a possible expansion.

As the University of Minnesota prepares for major building development on the school’s East Bank, officials are creating a plan to completely change the face of an area called East Gateway District.

Representatives from the University’s Office of Capital Planning and Project Management presented a detailed plan of the school’s vision for the area to members of the University’s Board of Regents Thursday.

The East Gateway area encompasses over 70 acres of underdeveloped land, and school officials said they hope to continue to expand the edges of campus into those parts.

“It is a tremendous asset that has great potential for the University,” said Monique MacKenzie, director of Planning, Space and Architecture at the University.

Plans include increasing private housing and retail development on the outer sectors of campus and making the campus’ entrances more pronounced.

“This site is a gateway,” MacKenzie said. “It’s a place where the public comes into the University, and we want to take advantage of that.”

The University has been buying land from railroad companies in the East Gateway district since the early 1990s; land was first purchased to make room for the Lion Center, which currently stands near TCF Bank Stadium. Since then, the University has built health sciences research labs in the area, and more recently, has planned to demolish the Electric Steel Elevators to make room for a recreational sports bubble.

Administrators said projects will focus on enhancing the presence of the Academic Health Center in the area, constructing new research buildings, and improving walking conditions for pedestrians.

In addition to redeveloping land the University already owns, school officials are coordinating with private real estate groups and neighborhood associations to develop the Towerside District — which will include market-rate and affordable housing units, office and retail space and community parks on streets in the Prospect Park neighborhood.

“It’s really a place where the University could and should think about how it interacts with the community,” MacKenzie said.

School officials said the University will work closely with its surrounding neighborhoods, including Marcy-Holmes and Prospect Park, to make sure the plan has community members’ interests in mind.

“Neighborhoods are real authorities in the city of Minneapolis,” MacKenzie said. “So the University, sitting in the middle of five neighborhoods, is very cognizant about that.”

“Over a very short period of time, this area is going to change,” said Sarah Harris, Managing Director of the University of Minnesota Foundation, which will help advocate and plan for the project. “Our goal is to make it change for the better.”

While there is not yet a specific end date for the project, some private developments will begin in 2017, and most of the project’s design phase will be finished by 2019.

Regents heralded the plan as an integration of the University into the broader community.

“With much of the University’s history, we’ve been somewhat isolationist,” said Regent Darrin Rosha. “We have the neighborhoods paying attention to what we’re doing at the University. With this perspective … we can already see the impact that the University is having on that relationship.”