The developer behind Stadium Village Flats is planning another complex nearby. 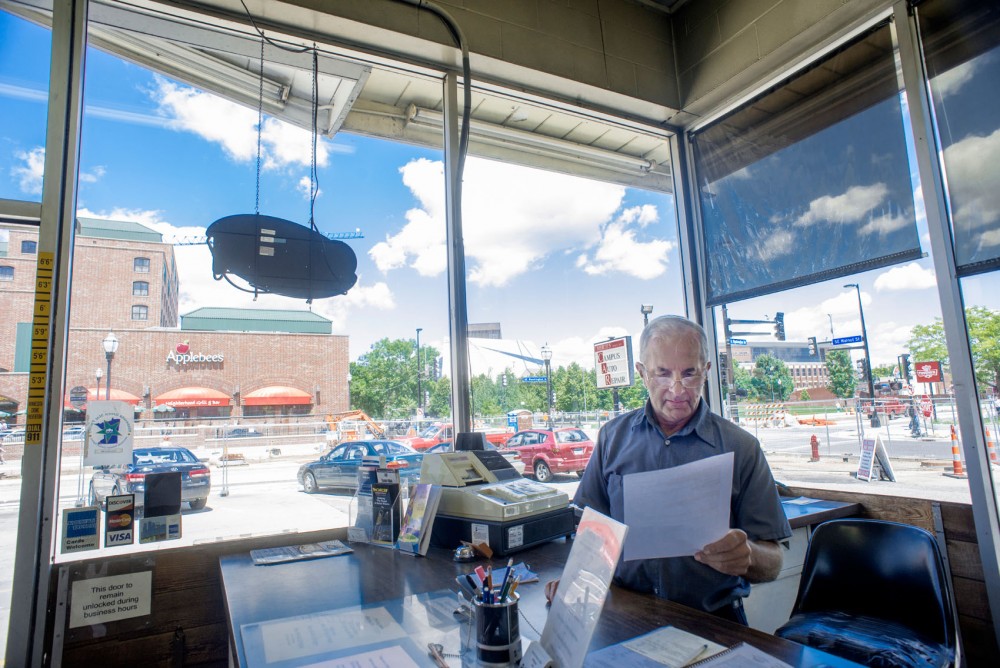 Keith Mercil (cq/source) works the front of the shop at Mercil's Campus Auto Repair on Thursday in Stadium Village. Keith Mercil, former owner and now retired, still comes into the shop to help his son Darrin do odd jobs

Construction of a new student housing project in Stadium Village is scheduled to begin in late August.

Both Noodles & Company and Mercil’s have plans to relocate to other spaces near the University of Minnesota campus.

Mercil’s is a longstanding business in the area, with four generations of the Mercil family having worked at the shop for the last 85 years.

Darrin Mercil, current owner of the shop, said business is strong and customers are very loyal despite the light-rail construction outside his front door. He said the company is not closing, but it is considering relocating to an auto shop near 19th Avenue South and Riverside Avenue.

Opus is nearing completion of Stadium Village Flats, its most recent housing project located two blocks east of Mercil’s. The new building will be similar in design but smaller, featuring 98 units with 160 beds.

“The quality, the finishes, the amenities will be very similar,” Menke said.

Jill Preston, Noodles and Company’s director of communications, said the restaurant is relocating to the first-floor retail space of Stadium Village Flats. Although the facility will be brand new, she expects the staff to remain the same.

“We may need to hire some new people, and people often move on,” she said. “But we don’t plan on losing any of our staff.”

The restaurant is scheduled to open this fall, but a firm deadline has not been confirmed due to the construction schedule of Stadium Village Flats.

“Right now we have it plotted for early October. I don’t anticipate it would be much earlier or much later than that,” Preston said.

Mercil said his relocation is more of a product of the changing neighborhood.

“This was the outskirts of the University,” he said. “If you look at the old pictures, we were three blocks from the University back in the day. Now we’re probably in the middle of things,” he said.

The installation of the light rail and the redevelopment of the Stadium Village area made the auto shop not fit in with the “look” of the neighborhood, Mercil said.

Neighborhood zoning restricts the construction of a new auto shop, but because the company was grandfathered in, they are allowed to operate within the current structure, he said.

“If we were flipped around, with the cars more behind us and this was more of a storefront, I think that would look better for the area. With the cars out here, it’s a little harder to get the look that you want,” he said.

Mercil hopes his core customers, long-time University professors and parents who repeatedly send their children to the University, will be able to follow his business to the new location.

He said the new light-rail stations and current bus transportation should make it easy to get to the new location without a car.

Although the family has a long history on Walnut and Washington, Mercil said they will be able to adjust and are looking forward to having a space almost double in size.

“You have to change with the times,” he said.

When Dave Mercil, Darrin’s grandfather, graduated from the University’s School of Architecture in 1929, the current economy made it tough to find a job in his degree.

He was fortunate to get a job at a gas station on the corner, originally owned by Amoco Corporation , Darrin said.

Over the years, the shop transitioned from a gas station to an auto repair shop.

Dave took over the shop in 1936, although Amoco retained ownership. Dave’s son, Keith, followed suit in 1959. The family finally purchased the property in the 1980s. Keith’s son Darrin started in 1982 and Darrin’s son Kurtis was hired in 2002.

“We’ve pretty much been doing the same thing for years and years. It’s a needed service,” Darrin said.

The Memorial Stadium had recently been built when Dave first started working, and he rode the street cars that were in operation around campus, Darrin said.

“They’ve got the new stadium now, and they got the light rail back. We’re back to where we started. So we’ve gone full circle.