Minnesota hung close with Penn State in the first and third sets. 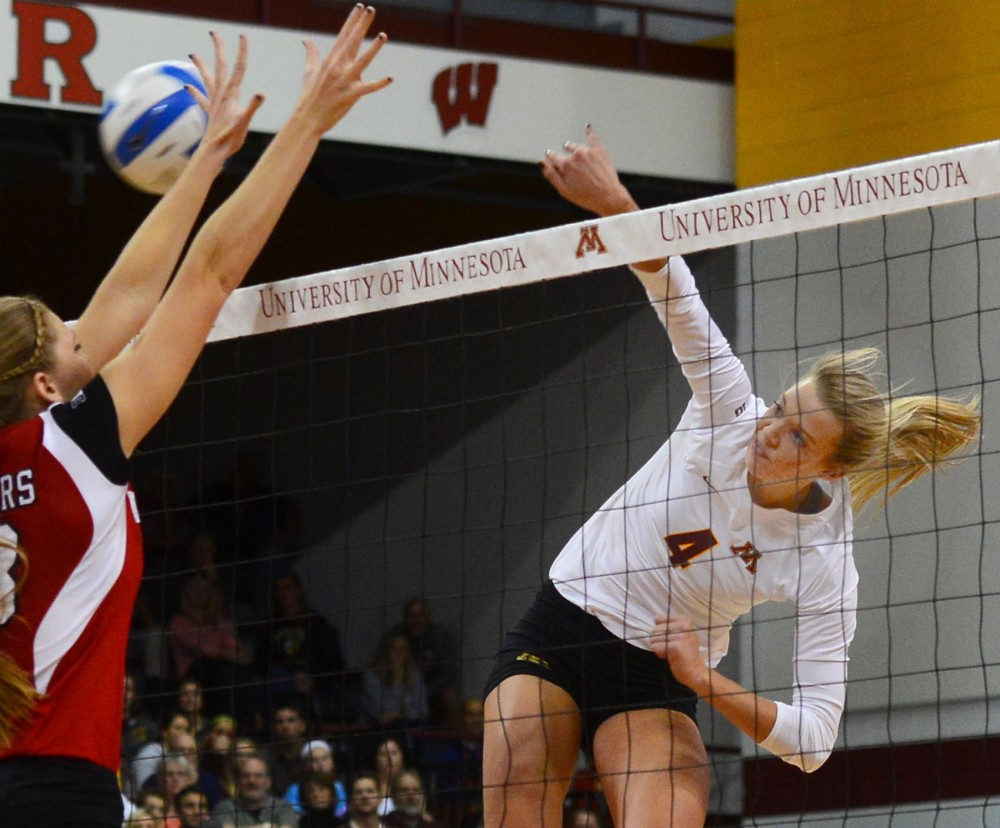 Gophers sophomore Paige Tapp hits the ball on Oct. 15 against Wisconsin at the Sports Pavillion.

In the midst of a nine-match winning streak, No. 6 Penn State had momentum rolling into Saturday’s contest against Minnesota.

But that didn’t stop the Gophers from challenging the Nittany Lions on their home court.

“We know we can stay with anyone,” sophomore middle blocker Paige Tapp said.

Minnesota jumped out to an early 10-6 lead in the first set. But after a timeout, Penn State came charging right back to close the deficit.

A 4-0 run propelled the Nittany Lions to a victory in the first set.

Head coach Hugh McCutcheon said the Gophers struggled to establish their rhythm on the road.

“Consistency was probably the main issue, and of course Penn State is a good volleyball team,” he said. “It was pretty up and down for the Gophers tonight.”

An early 9-4 second-set lead was too much for the Gophers to overcome in front of a season-high crowd of 5,569 fans at Penn State’s Rec Hall.

After Minnesota dropped the set 25-12, McCutcheon told his players to simply refocus on the match.

“We just talked about how we were approaching the moment of competition,” he said. “We let it slip away from us a bit in the second set when things didn’t go our way.”

The brief break between the second and third sets gave Minnesota the chance to catch its breath and regroup.

“We struggled a little bit to fight back [in the second set], but after that, we had a nice talk in the locker room and decided we were going to compete in the third set,” junior outside hitter Daly Santana said.

The pep talk was beneficial in the beginning. The Gophers jumped out to an 8-2 lead in the third set.

But Penn State mounted a comeback again and ended the match with an ace.

Santana led the Gophers with eight kills on 21 attacks, while setter Erica Handley dished out 25 assists.

Tapp hit .429 in the match and led the team with five blocks.

Tapp said the Gophers traveled to Penn State knowing the Nittany Lions would test them in all facets of the game.

“We were prepared to battle, knowing they’re a good team,” Tapp said. “So we’ll learn what we have to learn and move forward for our next matches.”

Setter Micha Hancock had 31 assists for Penn State and affected the game from the service line. The Big Ten’s leader in career aces had four on Saturday night.

Still, McCutcheon seemed confident in Minnesota — a team that’s aiming to play in the NCAA tournament this winter.

“Even though the score was 3-0, our team played at a high level,” McCutcheon said. “I still like this group moving forward.”