Both teams compete in pre-NCAAs this weekend 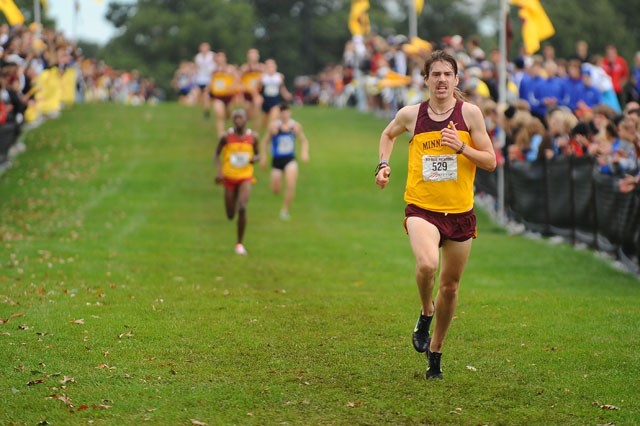 The Gophers menâÄôs and womenâÄôs cross country teams have taken a light training schedule this week to prepare for arguably the biggest meet so far this season. SaturdayâÄôs Pre-NCAA meet in Terre Huate, Ind., is an opportunity for both teams to collect what may prove to be crucial points towards an at-large bid for the NCAA Championships on Nov. 22. For non-elite teams like Minnesota, at-large points are critical when trying to convince the NCAA it deserves to compete with the top teams in the nation. The country is divided into nine regions, with 15 teams in each. Of those 15 teams, the top two get an automatic bid. Other teams need to make it on their credentials. The NCAA considers, among other things, where a team finished in the region and how many at-large points they received. For instance, menâÄôs head coach Steve Plasencia said that finishing third in the region coupled with several at-large points would likely earn a team a championships berth. Teams earn at-large points by beating teams that eventually finish in the top-two regionally. Teams generally only compete against other squads in their region a few times a year, including at Pre-Nationals. The menâÄôs and womenâÄôs teams are ranked No. 25 and No. 26, respectively, but itâÄôs the regional rankings that are important. Both teams currently hold a No. 4 regional ranking, meaning that if the season ended today, neither team would earn an automatic bid. ThatâÄôs why a meet like Pre-NatâÄôs, as itâÄôs known, is vital to the Gophers on their quest for a championships berth. âÄúEverything right now is predicated on getting points and peaking at the right time,âÄù womenâÄôs head coach Gary Wilson said. The meet is split into four different races, two for the men and two for the women. Each team only gets seven runners for the meet, instead of the usual 12. Participants are strategically divided into independent heats Friday, and head coach Steve Plasencia said he doesnâÄôt know which runners will be in which heat âÄî thatâÄôs for the NCAA to decide. ThatâÄôs different from the womanâÄôs format, which allowed Wilson to pick the runners for each heat. HeâÄôll couple his seven best runners in first heat and send the rest of the top-12 to the other. Historically, when the menâÄôs team was consistently one of the Midwest regionâÄôs top two teams, they wouldnâÄôt even compete in Pre-NatâÄôs because the at-large points were much less important. âÄúGiven the realities of our region right now âÄî itâÄôs become much stronger over the last five years âÄî we look at the very real possibility that youâÄôd rely on an at-large bid,âÄù Plasencia said. The women race at 11 a.m. and 11:40 a.m., with the menâÄôs races starting at 12:10 p.m. and 12:50 p.m. The next 10 runners who are not competing for the men will run in the Jim Drews Invitational, Plasencia said. WomenâÄôs assistant coach Sarah Hesser is taking the runners currently outside the top-12 to the Tori Neubauer Invitational. Both meets will be held Saturday in Salem, Wis.