For Hopkins, the pandemic presents an unusual, challenging time to be a coach

Hopkins continues to try and motivate her runners with hopes of a fall season. 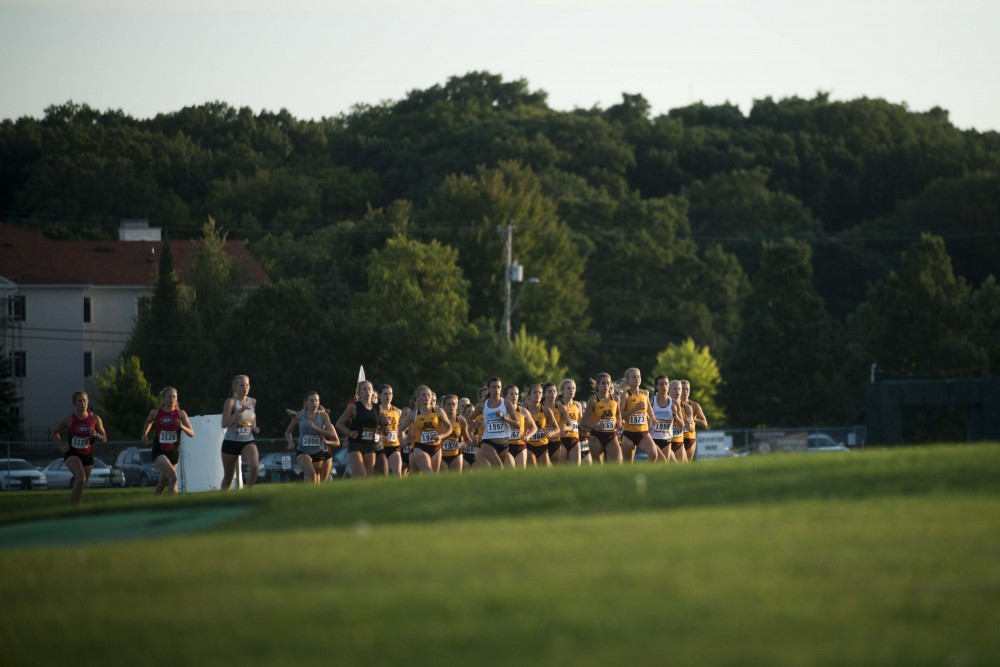 The Gophers begin their race at the Les Bolstad Golf Course on Friday, Sept. 6, 2019. Both Men's and Women's teams earned first place in the meet.

For Sarah Hopkins, Gophers women’s cross country head coach, the last few weeks of the coronavirus pandemic have been like running a marathon without knowing when the finish line will be.

“Marathons are long enough and hard enough when you know it ends,” Hopkins said. “To have a situation like this where you don’t really know when it is going to end and what the end point is going to look like makes it a little bit more challenging.”

Despite seasons ending prematurely and facilities closed down, runners on the cross country team are some of the few athletes able to train. Equipment, training facilities and in-person interaction with coaches may not be paramount to runners’ routines. However, coaches are even unable to mandate runners to train and report back with results. Instead, captains and others on the team can check in with different workouts for everyone to follow on their own time.

While her team is able to continue training, Hopkins said it is important runners do not overwork themselves because the team does not have access to training facilities and medical attention like it normally would. She said this time is a great opportunity to balance training with staying healthy and keeping some aspects of their lives as normal as possible.

“For [the team], I think it is nice that everything else is different but at least every day they can get out the door and go for a run and it feels the same,” Hopkins said. “It keeps them in their rhythm and in their pattern and keeps a little bit of sanity in a lot of ways.”

From sending funny memes or GIFs in the team’s group chat to sending different inspirational quotes, Hopkins has tried different ways to keep her team upbeat and motivated during a time when people might be struggling to find motivation. She said it can be especially difficult for goal-orientated runners when there are no races to compete in and see their training translate into results.

Nevertheless, Hopkins has been reminding her runners of the potential success the team could have in the fall as long as the season takes place and the runners remain focused. The Gophers return several runners from last season’s squad, which reached the NCAA Championship meet and will also have sisters Megan and Bethany Hasz returning for their final cross country season. Minnesota is expected to compete for the Big Ten title and a high finish at the NCAA Championships.

“No one really knew what to expect, but she gives us the support we need and is helping us through it all,” redshirt sophomore Sophie Schmitz said of Hopkins. “It’s really comforting to know she wants the best for us and checking in to make sure, aside from running, we’re okay. She’s obviously a good shoulder to lean on.”

The Gophers are not alone in this time, as every other team in the nation is experiencing similar challenges. Hopkins has spoken with coaches across the country to pick their brains for other ideas for how to handle this situation, but said everyone is flying blindly as no one has experienced something like this before. While this is affecting every team, Hopkins thinks teams that continue to give their best effort will come out of this with the most success.

Hopkins said it has been strange not doing what she normally would as a coach. On top of not being able to track her team’s progress on a regular basis, Hopkins’ recruiting process for the 2021 class has already been negatively affected. During this time, Hopkins and other coaches would normally travel to evaluate runners in high school meets. The 2020 class for Minnesota is set, but now everyone is unable to evaluate juniors in high school and plan for the long-term future.

“You realize how many things you can’t do as a coach when you can’t leave your house,” Hopkins said.