After a California bank halted money transfers to Somalia, locals are left without a way to financially help their families. 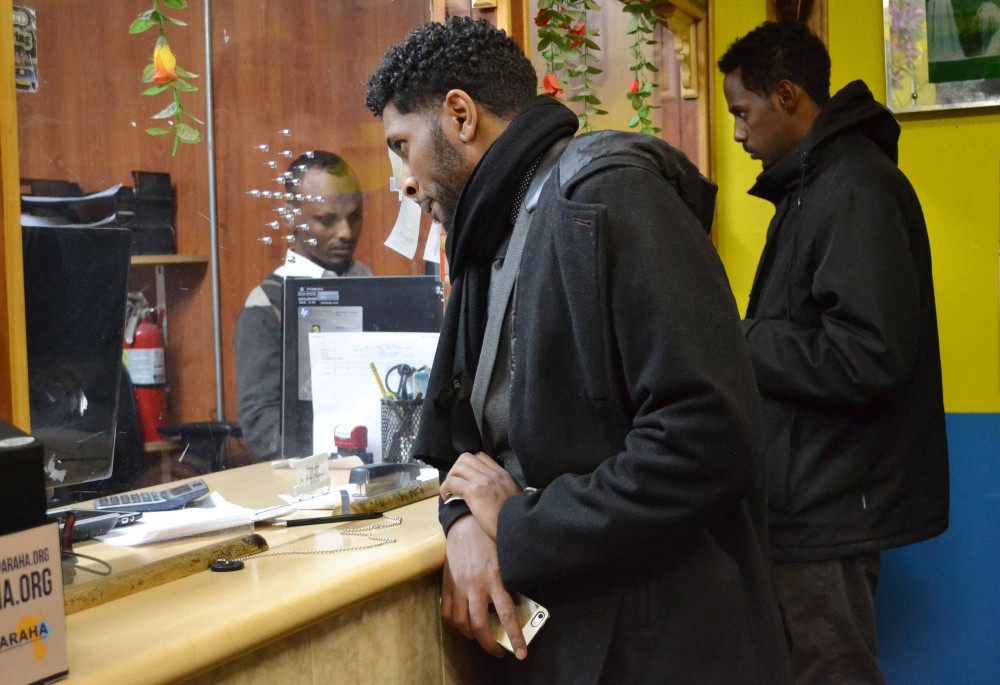 Customer Ali Adam gets assistance at Kaah Express, a hawala in Cedar-Riverside, on Tuesday evening. Hawalas serve as middle men between money senders in the U.S. and recipients in countries like Somalia.

In Tawakal Express on Cedar Avenue, Abdala Yusef used to sit at a desk behind a plastic partition and send money from Cedar-Riverside residents to people in Somalia. But all he’s done for the past two weeks is turn away prospective money-senders.

The number of banks that facilitated these transfers has been decreasing over the past 10 years. Last month, the last bank in the country to perform these transfers stopped, leaving Somalis without the $215 million they receive annually in remittances from U.S. senders, according to documents from the global aid group Oxfam America.

“Remittances are, by far, the most important financial inflow for the country of Somalia,” Scott Paul, an Oxfam senior humanitarian adviser, said.

To discuss solutions to the halt in money transfers from the United States to Somalia, Rep. Keith Ellison, D-Minn., met last Thursday with a group of Congress members and representatives from a slew of federal agencies.

Ellison said the group of lawmakers, which included Minnesota Democratic Senators Amy Klobuchar and Al Franken, asked the Office of the Comptroller of the Currency and other federal regulators at the meeting about other avenues for transferring money to the country but left with no real results.

“We put a lot of time, energy and resources into getting this meeting together,” Ellison said. “[But] we walked out of the room fairly frustrated … they pretty much had no answers,” he said.

Some speculate that federal regulators pressured the bank to halt remittance services in an effort to prevent U.S. residents from sending money to terrorist organizations, like al-Shabaab or the Islamic State.

But the OCC, which regulates the bank, attributes the halt to an enforcement action it filed with the bank, asking it to re-evaluate its current strategy.

Unlike a wire transfer, remittances use establishments called hawalas to perform a transfer-like process that gets money to other countries.

Mohamed Elmi, the assistant manager of the Afrik Grocery and Halal Meat in Cedar-Riverside, said he used to send money to his wife and family in Somalia. He hasn’t sent any money for the past few weeks, and his family is growing worried.

Elmi said he and his family are hoping that the American government will intervene.

Bryan Hubbard, director of Public Affairs Operations for the OCC, said the agency hasn’t ordered any restrictions on money transfers to Somalia. Rather, he said the agency is asking the California bank to alleviate concerns about how it does business — thereby halting remittances.

“The bank has made a choice to terminate the service because the bank cannot manage the risks associated with its business,” Hubbard said.

Ellison said he thinks the bank’s decision to stop remittances is a nearsighted effort to halt funding to terrorists.

Ellison said he doesn’t currently have a short-term approach to the issue, but he ultimately intends to find a solution to the problem.

“I’ve been working on this every day,” he said. “I’m not gonna stop until we get somewhere.”